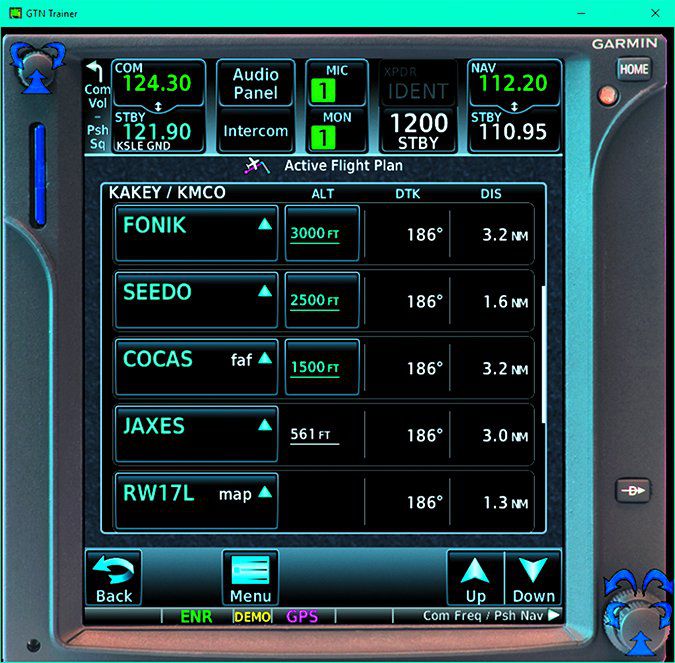 Garmin’s latest software for the GTN navigators (V6.5) offers compelling new features. GTNs come in both the GTN 700 and GTN 600 series. The patriarch is the x50 (650 or 750) with GPS/NAV/COM capabilities; whereas the x25 has only GPS. The 600 and 700 differ in the screen size and the 700’s ability to control an embedded audio panel. With the larger screen, the 700 can also display georeferenced (Jeppesen or AIS) approach charts.

Full disclosure: I’ve had a 750 and 650 in my Mooney Ovation since Garmin first released the GTNs in 2011. Since then, I’ve gone through eight software updates, each one adding additional features and capabilities.

The hardware design of the GTN is interesting. The only physical controls are direct-to, volume, HOME, and concentric inner and outer knobs. The HOME page has a similar look and feel to Garmin Pilot and the new G500TXi MFD. Operating similarity across platforms adds familiarity.

Almost everything else is touch screen. I’ve heard pilots say: “I will never use touch screens because they are difficult to use especially in turbulence.” Such comments are usually from pilots who haven’t flown with touch-screen avionics. This might come from tablets where the only choice is to touch the screen to make the magic happen. Just about everything in the GTNs can be done with the concentric knobs.

I use my terminology, not Garmin’s: “fine” and “gross” touch. By gross touch, I mean touching something in the neighborhood of the desired target. For example, gross touch gets you to a page such as the MAP page or traffic display from the Home Screen. Fine touch has to be more precise; for example, entering waypoints for a flight plan using an on-screen keyboard. But the flight plan waypoints can be entered using the concentric knobs—similar to the GNS navigators. I find that it is much quicker to type than use the click-clack-push letter-by-letter method with the concentric knobs. But in turbulence, the concentric knobs remain an option.

Now, on to the new features.

The altitudes next to the waypoints can be changed if blue (cyan). The choices are “at or above,” “at or below,” and “at.” Depending on other equipment, these might also bug an altitude on an EFIS, such as the new G500TXi.

When altitudes are shown in white, they cannot be changed, such as approach minimums. You can also manually enter altitudes for most other fixes.

Remember the old adage: “from high to low, watch out below”? While temperature has less effect on altimetry errors than pressure, it becomes important when temperatures are very cold close to the ground. It has been standard ICAO practice to make corrections to altitudes during approaches when temperatures are colder than a critical temperature that varies by airport. The FAA has adopted this practice and currently about 70 airports in Alaska and about 160 in the lower 48 are cold temperature restricted airports.

Such airports can be identified in the upper left of AIS approach charts with a snowflake symbol and a critical temperature. Jepp charts use a text note. Digging, you’ll find a list of affected segments that can be any combination of intermediate, final, and missed approach segments.

The manual calculations for corrected altitudes can be tedious. With the new VNAV capability, the GTN can determine temperature-compensated altitudes for us. Let’s look at Laconia Municipal Airport (KLCI) in New Hampshire. The critical temperature next to the snow flake is -25 degrees C and only the intermediate segment is affected—between the TUYUK and OSPEE. Today it is a chilly -30 degrees C.

Enter the current temperature and the GTN automatically calculates the corrections as indicated with a snowflake. OSPEE will now show 3567 (almost 3600) feet instead of the uncompensated 3100 feet.

Note that when flying with temperature-compensated altitudes, you should inform ATC: “Require 3600 feet from TUYUC to OSPEE for cold temperature operations.”

The original on-screen keyboard for the 700 series is the ABC keyboard with numbers. An option is now a standard QWERTY layout. Use what you like.

The biggest change is in the 600 series with the smaller screen. The original keyboard was a horizontal alpha-numeric tape and a “slider” showing only five letters or numbers at a time. While this is easier than the click-clack-push letter-by-letter method, the slider is still tedious.

There are now two other options: QWERTY with a toggle for numbers and a “half ABC” with toggles for the rest of the alphabet and for numbers.

Suppose you’re flying to Melbourne, FL (KMLB) from the southeast at 5000 feet and are approaching the Treasure VOR (TRV). ATC instructs you to cross 15 miles southeast of Treasure at 3000 feet. Simply touch TRV and “Along Track,” select -15 miles then select “at” altitude of 3000 feet.

With the last eight GTN updates, Garmin introduced many new features. Updates have added safety items such as “visual approaches” to many runways (V6.4)—a real boon at night with no PAPI—and functionality like pinch-to-zoom (V6.2). I look forward to what the next eight updates will bring.

Luca F Bencini-Tibo anticipates the day when the GTN 750 dispenses hot coffee in flight. Or perhaps some peanuts.