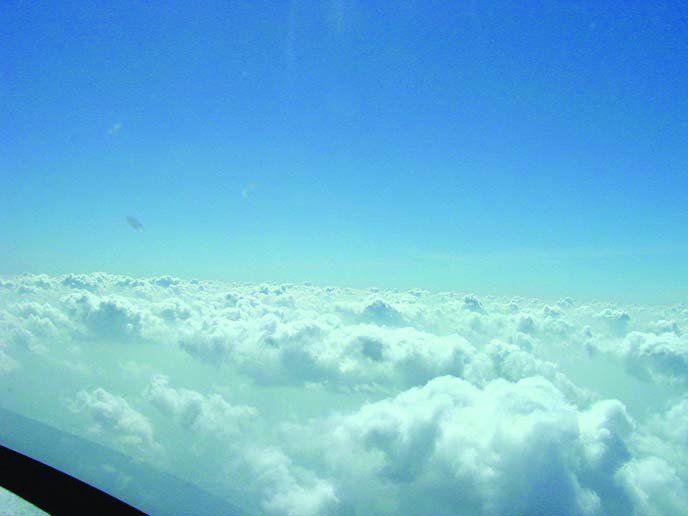 The forecast said that deep, moist convection was likely for your afternoon flight. On your drive to the airport, you second-guess the 10,000-foot altitude you filed. Should you have filed for the low to mid teens? Perhaps you should have filed a much lower altitude to try and stay below the clouds?

The prime directive in convective flying is simple: Strive to stay visual at all times unless you have the equipment, training and experience to do otherwise. Staying in VMC goes a long way to keeping you out of the nastiest part of the thunderstorm, the in-cloud turbulence.

But how best to stay visual is like the “dive-and-drive” versus “stabilized approach” debate among instrument pilots. My stance is that you’re better off up high where the air is generally smooth and visibility to the dangers ahead are clear rather than down low in poor visibility and thermal turbulence picking your way around the rain shafts. But it’s not the right choice for every flight.

Smooth and Clear up Here

To stay visual up high, you need to climb enough to top the haze layer that’s frequently present during the late spring, summer and early fall. That could mean as low as 8000 feet to upwards of 17,000 feet depending on the weather, season and your location on the globe.

In a highly capped environment (negative or low-positive lapse rate above the cloud tops), pollutants get trapped between the cumulus cells and below the bases, making forward visibility extremely difficult. Climbing above this haze layer often keeps you above most of the cloud tops, too.

A higher altitude keeps you separated from terrain and obstacles. Anyone can become distracted, and flying low with poor visibility may mean missing the presence of the mountain peak ahead or radio antenna. Having an obstacle database or terrain warning system is a wonderful asset, but be sure to keep those databases updated. Cell towers pop up all the time.

Flying down low is similar to being the short kid trying to watch the parade. Forward visibility is a must when choosing which buildups to challenge and which ones to avoid. Visibility also buys you time.

Some cumulus may tower well above your flight level, but that’s OK. Given good visibility at a higher altitude, you can identify these congested clouds in the distance and plan a preemptive deviation. Steer well clear of the big ones. Smaller ones you can often brush by without any concern. Keep in mind the clouds are moving within the prevailing wind and may be growing or dissipating.

Flying high means a greater risk of structural icing. No matter what time of year, don’t depart for a high-altitude flight without knowing the melting level (a.k.a., the freezing level). Keep in mind that convective icing can happen even where no icing AIRMET exists.

Entering a cumulus cloud at a subfreezing temperature will almost certainly send you through a shower of supercooled liquid water with drop sizes that could easily exceed 50 microns in diameter. Even momentary encounters with these supercooled large drops (SLD) can be devastating, even with some deice system. Another reason to stay visual.

You should also avoid flight between multi-cellular convection, including towering cumulus. A cumulus cloud between two larger cells can seem pretty benign from the distance. These ‘tween buildups can explode into nasty cells in just 10 minutes. The same can be true of benign-looking buildups that book-end a line of storms. These end-cap congested cumuli can grow into thunderstorms in 10 to 15 minutes.

As a general rule, you don’t want to attempt to out-climb a building cumulus cloud, either. Developing cumulus can grow at rates as high as 6000 feet per minute given the right conditions. Vertical growth of 1500 feet per minute is common. You’ll likely find yourself climbing into serious icing conditions if you can’t out climb the building cloud.

We all know about the latency issues with NEXRAD. Remember that it’s more of an issue with convection, where a 10-minute-old image might be the difference between no NEXRAD return and a nasty developing cell already spitting lightning. Again, visual is your friend, as you can compare the NEXRAD with the visual to assess how wide a berth to give developing cells.

Here’s an odd one to also keep in mind: Don’t fly close to a thunderstorm or towering cumulus when your altitude is near the melting level. Your aircraft can induce a lightning strike. This is especially true of precipitating towering cumulus. Apollo 12 astronauts got to experience this first-hand.

One of the worries with flying high is being “stuck” on top with nowhere to go. It’s an issue if the cumulus cloud deck below is broken and you’re not instrument rated and current. It can also be an issue if something like ice makes even a pop-up clearance undesirable.

It’s rare, however, to have such a cumulus cloud deck without sufficient holes to descend. Being higher lets you assess a greater area for holes, even if that means overshooting your destination by a few miles to let down safely. If descending under IFR, 10- to 20-degree deviations are all that’s necessary to maneuver around the big stuff. Don’t forget that ATC wants to know about all deviations, even those smaller ones.

Following on that idea, maintain a close eye on your fuel consumption and plan a larger fuel reserve. An extra 30 or 45 minutes past your normal fuel reserve is reasonable. You may burn less gas per mile up high, but the climb and any ATC delays will whittle that down. Don’t be tempted to push fuel when you’re up high and avoiding convection. No one wants to choose between descending through a dangerous cell or risking running out of fuel due to a large deviation just shy of your destination.

It’s unlikely you’ll find an altitude “in between” that works well. Intermediate altitudes usually put you right at the top of the haze layer, especially for a late afternoon flight. When convection is forecast for the evening, the field of broken clouds usually appears in the early afternoon. A majority of these cauliflower-looking clouds are harmless, but who wants to be tossed around for an hour or more in and out of IMC? Take your pick: Climb up above this field of clouds and haze or descend down below the cloud bases.

The playing field is different for every flight. What makes sense during daytime may not be an advantage when it’s dark. Although, lightning inside cells is easier to see at night. Night flights near convection deserve their own article.

Not all pilots have the luxury of flying high. You need oxygen (or pressurization) and a high service ceiling coupled with a decent rate of climb. If you don’t carry oxygen, you won’t have the ability to climb above the taller buildups. You don’t want to get to 12,500 feet and discover that higher buildups won’t allow you to remain visual on top, defeating the prime directive.

The length of your flight also factors in. On a flight of 30 minutes or less, it rarely makes sense to climb high. If you opt to fly low on a short flight, though, map out your route before you depart. This may not be easy if you are flying IFR within busy airspace. Your best strategy is to negotiate as you go, accepting what clearances you can and speaking up for critical deviations.

Maybe Not Even IFR

Whether you go high or low, you might want to toss the much-touted idea of “flying IFR like the pros.” Working the IFR environment when there are convective SIGMETs along the route takes experience. Frequent deviations around convective cells while negotiating the airways near the minimum en route altitudes (MEAs) is a nightmare from an ATC perspective.

Before you commit to flying IFR, consider VFR with flight following. It’s almost always the best choice for normally-aspirated piston aircraft that have trouble getting serious altitude. It can even be a good choice for a turbocharged, or even turboprop, airplane so long as you can stay below FL180. Required cloud clearances force you to remain outside of the physical cloud boundary, while VFR self-routing affords maximum flexibility to maneuver around the weather.

No matter how you go, having options is what it’s all about. Flying high in convective weather usually affords better options and more information to help you choose which one is best.

Scott Dennstaedt is a former meteorologist and long-time contributor to IFR.