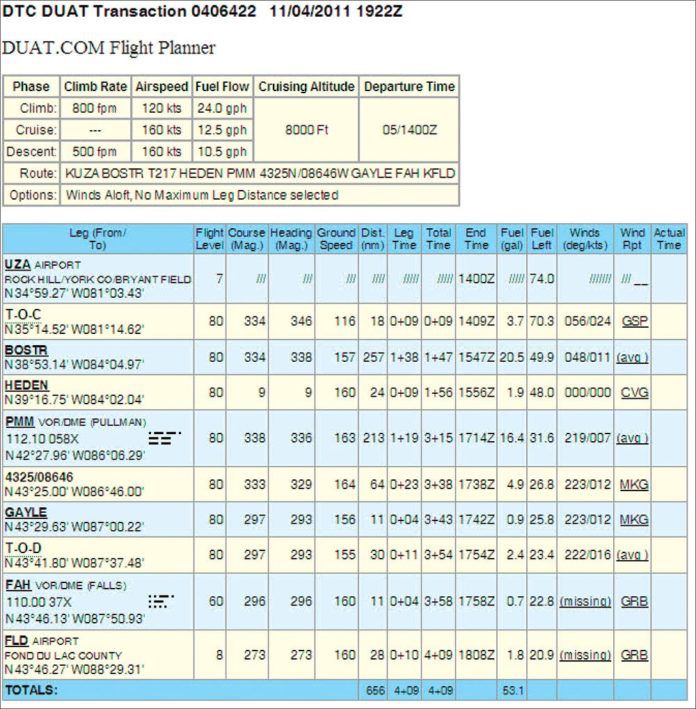 Sometimes just knowing the preferred route isn’t enough. You need the secret code for putting that route into the system.

Every year I fly from my home base at Rock Hill, S.C., to Fond du Lac, Wisc., for the Oshkosh AirVenture fly-in. I normally take a route east of both Cincinnati and Chicago, which takes me over Lake Michigan. As I near the lake, I always get the following re-route: “Cleared direct Pullman, then via the Pullman 333 radial to intercept V510, Falls, direct Fond du Lac.”

The first time I got the clearance, I spent a good deal of time trying to figure out how I could enter the clearance into my Garmin GNS 530W and let the autopilot fly the route. Otherwise, heaven forbid, I was going to have to break down and use the VOR to fly the intercept segment. I came up with a solution about the time I passed over Pullman VOR.

My 530W, and most GPS navigators, allow you to define a user waypoint by a radial and a distance, the intersection of two radials, or latitude and longitude. I used the intersection method, as V510 is on the 296-degree radial of the Muskegon VOR (MKG), so the point that the 333-degree radial of Pullman (PMM) intercepts V510 is on the MKG 296 radial. I named the user waypoint PMM33 so I could remember it, and then edited the flight plan to read PMM PM333 FAH KFLD.

I encountered several problems. Although my flight planner supported user-defined waypoints, there wasn’t a means to enter the location as the intersection of two VORs. I could specify a latitude and longitude or distance and radial from a VOR, but I didn’t know the values to enter. I then attempted to use the measurement tool to determine the distance from PMM, but at the time, the planning software used the local variation for determining the radial and not the original variation (called the declination) that the VOR was adjusted to back in 1965 and that is used to determine the path over the ground for the radials. This has since been fixed, but it introduced a five-degree error at the time.

Necessity being the mother of invention, I loaded up the GNS530W simulator to define the user waypoint I needed. It automatically gave me both the latitude-longitude (N43 24.94′ and W 086 46.15′), and the distance (64.1 miles). I transferred the data to the planner and included my user waypoint in the route.

Remembering back to my King KNS80 Rho-Theta RNAV days, we used to file direct routes by specifying a series of VOR, radials and distances to define the route. I tried a few iterations on DUAT before I got the format right. It’s VORrrrddd, for example PMM333064.

On reading through the DTC DUAT User Guide, I came across the fact that one can file a flight plan as one or more waypoints defined as a latitude-longitude. There are variations of the format that will be accepted, with the waypoint specified in degrees and minutes. Using the waypoint in my example, any of the following are accepted in the route for a domestic flight plan: 4325/8646 or 4325/08646 or 4321N/8646W or 4321N/08646W. CSC Duats would only take the latitude longitude in the first format without the N or W. ICAO format is similar, but it doesn’t include the “/” between the latitude and longitude, but requires the hemispheric characters. The example ICAO flight plan coding would be 4325N08646W. Also, although ICAO route formatting requires DCT between fixes to indicate a direct route, DCT is not used between two latitude-longitude fixes in FAA flight plans. Fltplan.com can also take these lat/long fixes.

So as it turned out, I filed the following route between my home at Rock Hill and Fond du Lac: KUZA BOSTR T217 HEDEN PMM PMM333064 GAYLE V510 FAH KFLD, although I could have substituted the latitude-longitude of 4325/8646 for PMM333064. T217 is to route around Cincinnati and GAYLE is the first intersection along my route after intercepting V510.

On the day of my flight, the clearance was “as filed.” About 20 minutes southeast of PMM, the controller came on the frequency with a reroute, but noted that it was essentially along my current flight plan. So I dutifully copied and read back the reroute: “Current position direct Pullman, then via the Pullman 333 to intercept V510, Falls, direct.” I remarked to the controller after my readback that my flight plan was the same as the reroute but there was no direct way of entering the route as he stated. At least I didn’t have to reprogram the 530W. A few minutes later, the next controller gave me direct to GAYLE, which if it had been part of the preferred route, I wouldn’t have had to go through the odyssey to figure out how to accomplish this in the first place. It was still a valuable lesson that I might be able to use in the future.

As I was writing this article, I met with a friend and Jason Miller at Rock Hill for lunch. Jason is one of the founders of ForeFlight and, over lunch, he demonstrated how to plan the same flight in a few minutes. To make matters even better, ForeFlight’s product already automatically codes the user waypoint we needed as a latitude-longitude in the flight plan. Way cool!
When he isn’t vacationing in Wisconsin, John Collins instructs above and around the Carolinas.