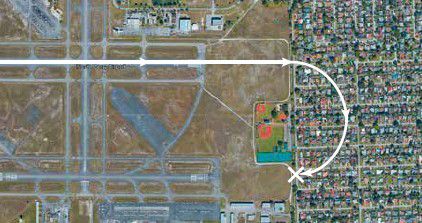 Few of us will never need a 180-degree turn back to a runway following a power failure. But, if you ever do, here is a trick for you to consider. Recently, a Beechcraft B36TC Bonanza was cleared for takeoff from Runway 10L at North Perry Airport (KHWO), located six miles southwest of Fort Lauderdale/Hollywood International Airport in Florida. After liftoff, the Bonanza suffered an engine failure. The pilot attempted a right 180-degree turn to the parallel runway to land on or near Runway 28L. This is often referred to as “the impossible turn” for a variety of factors. Unfortunately, during the maneuver, it struck a utility line (unconfirmed) and then an SUV on the road adjacent to the airport. It came to rest in a ball of fire against the airport’s chain-link fence with tragic results. Both occupants of the airplane and a passenger in the SUV perished.

Had the airplane been 100 feet higher, it might have overflown the chainlink fence and landed on the airport property, which is open land. Assuming he used best glide speed, how else might the pilot get that needed 100 feet? A nearby doorbell camera captured the moment of impact and showed the gear was retracted. The next question is, did
the pilot consider placing the constant speed prop in the “coarse” position to minimize its drag?

For single-engine airplanes with constant- speed props, there is the potential to extend the glide path (or decrease descent rate) after an engine failure by pulling the prop control all the way out to low RPM. The terms low RPM, coarse pitch, and high pitch are synonymous, just as are high RPM, fine pitch, and low pitch. I will use the terms low RPM and high RPM because they best describe what the propeller is doing.

An airplane propeller is an airfoil. It creates lift (thrust) in opposition to airplane drag. A propeller also has an angle of attack resulting from a relative wind that is a complex interaction between the forward speed of the airplane and the rotational speed or RPM of the prop. Constant-speed props are usually found in higher performance airplanes
because they have a wider operating speed range and operate as an airfoil “gear shift.”

In my Mooney Ovation, I experimented and determined that in high RPM, my descent rate was 800 fpm. In low RPM, it was 570 fpm. By reducing the RPMs, piston compression drag was reduced, and gliding distance increased by 40 percent.

The contrast between the two aircraft is possibly that the Mooney is clean and has a bigger engine—so the compression drag is a higher percentage of total drag versus a Cessna 182.

Implications for instrument pilots in single-engine airplanes with a constant- speed prop:

This could be a life-saving exercise to perform in the airplanes you fly.

I have demonstrated and taught that if your engine fails and the prop is still spinning, pull the prop control full aft. But it’s disconcerting that this is not in the Cessna 182 POH. However, the Textron (Cessna) representatives told the owners that in an engine failure, the pilot should pull the prop control back. So, the operator faces a dilemma. They don’t want the liability of changing the factory checklists, but pulling the prop is what you should do. It’s probably a safe assumption that glide performance in the POH is based on high RPM. When using low RPM, one can be confident that performance is better than that.

High RPM glide is a worst-case scenario. If you plan for that, low RPM or stopped prop is going to be better, but the POH doesn’t tell us how much better. If you lose oil pressure, the prop is going to go flat pitch, so, for many engine failures, coarse pitch might not be available.

Cessna test pilots responding to a request from the Civil Air Patrol (following two accidents) stated that pulling the prop has minor effect. This is counter to the data that I have personally collected in a Mooney Ovation and Cessna 182. Perhaps we could argue what “minor” means.

In the Mooney Ovation pulling the prop isn’t on the checklist, but in a note: “Greater glide distance can be attained by moving the propeller control full aft
(low RPM).”

No discussion about “extending the glide” is complete without considering two related topics—the “impossible turn” and the “startle effect.”

Much has been written about the “impossible turn”—a 180-degree turn back towards the runway following an engine failure soon after takeoff. The positions run from “never do it” to “maybe under the right circumstances.”

But “the right circumstances” are difficult to evaluate when the event occurs. Even at 1500 feet or more there can be many variables to consider.

Yes, you could practice the scenario and establish a go/no-go altitude for your aircraft. A pre-flight planning task is to review the departure path and determine if/where there are possible places to put down that present less risk. Although it will probably damage the plane but it might allow you to survive. The old axiom of “fly the plane as far into the crash as possible” still has some validity. Regardless of what you decide, maintain control.

Also, avoiding injury to those on the ground is often a driving force that can influence decisions. Of course, nobody wants to bend the plane. As soon as that prop stops, assume you have “sold” the plane to the insurance company and consider only the safety of you and your passengers.

Consider not making any turns until at least 800 feet AGL. Below that, commit yourself to what you see 60-degrees left and right of the nose. Any flat area offering at least 300 feet (a football field) will do—another
reason for short-field proficiency.

You probably won’t get stopped before hitting the goalposts or other obstacles, but your velocity/energy at that point should minimize the impact.

One of the limiting factors of handling an engine out situation can be time to recover from the “startle effect,” the realization that you are going down, and recognizing that you have to take charge of the outcome with limited options. The unexpected presents a distraction that can impede performance and result in bad decision-making and subsequent actions.

The first time “an emergency” confronted me, it was contrived by the Designated Examiner in the right seat during my Instrument check-ride. It was executed so well that I thought it was real. My reaction (startle effect) so impressed me that when I became a CFI, I have always tried to include a “real” emergency in the training so the student can face the issue and come to grips with it. In my 46 years as a CFI, only once did the pilot not recover emotionally. He froze, and I had to talk him through it.

I was fortunate that my first real power failure came as I turned downwind from a 45-degree pattern entry. The engine quit from carb ice. Being at a low-power setting, I didn’t realize it until I saw the prop staring back at me. As this was in a Taylorcraft L-2 that had no starter, I had few options. I made a short approach and advised the tower, as I was rolling out, that I would need some time to clear the runway. —Ted Spitzmiller

In the Bonanza A36 it is in the checklist: “Maximum Glide Configuration: 4. Propeller—Pull for low RPM.”

Piper Arrow II, like the Mooney, places the information in a note. “At best gliding angle, with the engine windmilling, and the propeller control in full ‘decrease RPM,’ the aircraft will travel approximately 1.6 miles for each thousand feet of altitude.”

Piper Malibu has it in the checklist: “Propeller Control … Full decrease.”

The Cirrus SR22 has a constantspeed prop, but the single-lever power control offers no direct prop control. So nothing is mentioned.

As noted, the Cessna 182 and 206 handbooks are silent on the subject.

As seen from this small sample of POHs, terminology and where it is presented are different; mentioned as part of a checklist, in a note, or not at all.

The FAA has long discouraged pilots from even considering the impossible turn. Still, the desire may be overwhelming when a power failure occurs, and all you see out the windscreen are buildings and powerlines, or trees and rough terrain. But if there is a field in front of you, go for it, as the turn is a hazardous maneuver under these circumstances. But a part of the decision is actually made before you apply power. You should have some idea of the airport environment and your skills, practice, and forethought. If you consider it an impossible turn, then it is as far as you are concerned.

To understand constant-speed props, let’s first review two related terms. The constant speed prop “works” inside the governing range. The power setting is such that the propeller (or crankshaft) can maintain a constant RPM setting by adjusting the propeller pitch (load on the engine) regardless of the power setting (manifold pressure).

Outside governing range the power setting is too low for the constant speed prop to adjust its pitch far enough to maintain RPM. This occurs when power is reduced beyond the point where the propeller is in full high RPM and to maintain the selected RPM would require an even flatter pitch not available. RPM then varies with throttle position; the propeller acts as a fixed pitch prop.

During takeoff, we want maximum power that is usually achieved at high RPM, but during cruise a lower RPM results in more fuel efficiency.

There are two forces acting inside the propeller hub. One force is a spring, and an opposing force is oil pressure. The governor, as a high-pressure oil pump using engine oil, senses slight changes in crankshaft rotational speed and either increases or decreases the oil pressure. This tug-of-war ends when the two forces are equal, and the prop blade is at the desired angle needed for a pilot’s selected RPM. Higher oil pressure increases blade angle, thereby reducing RPM, and the opposite is true with lower oil pressure. This means that to achieve low RPM, oil is necessary. If engine oil is lost, the prop will not go to low RPM,
and the spring in the hub will make the prop go to high RPM.

During runup, we typically “cycle the prop” twice at a certain RPM. The prop control is pulled
out to its stop, the prop blades move to low RPM positions, and the tach shows an RPM drop due to the added drag. The prop control is then pushed back in, and the RPM returns. This verifies the operation of the prop/governor combination and “refreshes the oil” inside the prop hub with warm oil. (This procedure is done during runup with a “warm” engine.) —LBT