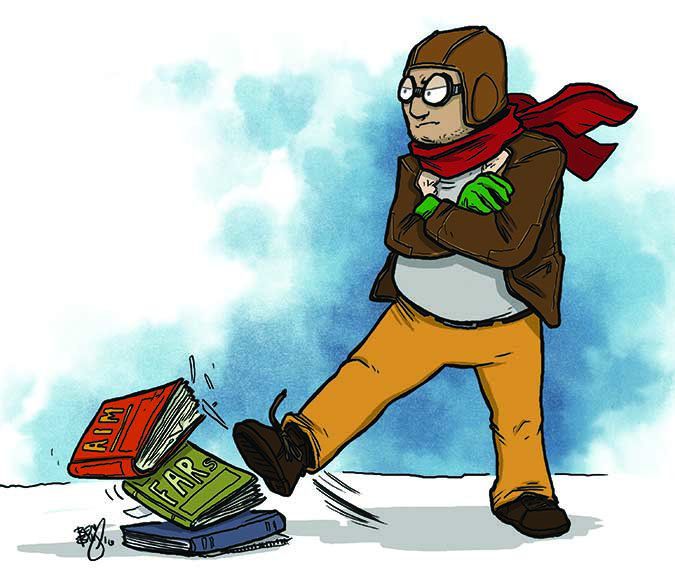 A long time ago a big-shot businessman pilot told me that the regulations were just guidelines, that he had always regarded the law that way and it had always worked for him. I blanched at the thought. But as a brand-new instructor, and a little uncertain of myself, I said nothing.

That failure became a big shoulda-coulda-woulda lesson in my professional development as an instructor. Today, I would tell him point-blank that the regulations are written in blood and cast in stone, that they aren’t casual guidelines, that deviations invite FAA scrutiny, and that if the Feds train their boresight on you, you’re going to have some explaining to do—and your explanation had better be good.

I would tell him that, but I can’t. About four years later he killed himself and three passengers making a downwind takeoff from a short grass strip, over gross, on a hot day.

One of the five hazardous attitudes is anti-authority: “Why should I listen to you?” This attitude is characteristic of non-conformists. Yet all of us pilots are non-conformists, almost by definition.

Piloting is a Hazardous Attitude

At the end of 2015, the FAA counted 590,039 active certificated pilots. Divide that by the over-18 population of about 248 million people in July, 2015 and we discover that pilots make up just 0.24 percent of the population. If that doesn’t mark us as nonconformists, what does?

There is a place for out-of-the-box thinking in aviation, even in that most rigid domain of airline aviation. I would rather fly with someone possessing something like Sully’s creativity than fly with a living automaton who would have gone right to the FMS looking for a solution while the airplane descended inexorably toward earth. I’m certain there are creative cockpit thinkers taking creative and appropriate actions every day. They just don’t make the front page.

Yet the system can be crushing. Renowned pilot and author Ernest Gann noted this distinction in his classic book, Fate is the Hunter. He wrote that the individuality-crushing airline seniority system, “could make little half-fearful automatons of men who … might have the fire for greatness.”

Chronic resentment toward authority is a problem for any pilot, but even more so for an IFR pilot. Pilots who duck-under “a little” to make it into an airport, don’t bother to file an alternate and maybe don’t remember the rule, or care, are a few examples of where pilots believe they can get away with stuff. Yet “stuff” has cost people lives.

Even without a wreck, sooner or later someone will notice and the pilot will have FAA issues. It’s like speeding. You’ll get away with it for a while, but the odds stack up against you over time.

A flight school owner who nursed a virulent loathing of the Feds eventually got caught signing students off for various tasks they had not actually accomplished. The FAA emergency-revoked his ATP, CFI tickets, type ratings, the works. The now-former pilot had to wait a year before he could apply for his tickets again, starting with Private Pilot 101 and zero time. An anti-authority attitude is going to hurt you one way or another.

However, questioning authority is not anti-authority. It is our obligation as part of a system. Example: Last week we declined an IFR clearance that had us flying to a fix within an active MOA. It turned out to be a controller error. When we check one another we compose the threads that weave the web of safety that protects us all.

My respect for regulations waver when they don’t make sense. Being forced to wear a hood in an A-ATD which can be set for zero-zero weather did not make sense. Someone in the FAA finally exhibited basic horse sense and dropped that absurd rule.

Another irrational rule is activating our transponders at engine start so that ground surveillance radar can track us as we taxi on the airport surface (AIM 4-1-20 a.3.). The rule was instituted because across all of the 35 ASDE-X airports where this matters most, controllers had to instruct pilots to activate their Mode C an average of 20 times a day. To be fair, there are 64 A-SMGCS airports where it could help as well.

Had the FAA limited the rule to those airports, it would have made perfect sense. But no, it applies to all. The result: a GA pilot flying overhead with a G1000 PFD—including in the pattern—gets a bright yellow sun on the PFD and a sudden traffic warning, scaring the pilot into thinking a midair is imminent.

At Lantana, FL (KLNA), there was a simple VOR/GPS 15 approach that could be flown day or night. The problem for ATC was that they had to stop departures from Palm Beach (KPBI) as pilots flew overhead because of a conflict with KPBI’s missed approach corridor.

Someone resolved the problem by giving KLNA three RNAV approaches and decommissioning the VOR/GPS approach. Now the approach from the west takes pilots directly over three tall towers. The other two RNAV approaches are at low altitude and overwater. All three procedures are “NA at night.”

I would not be surprised if some anti-authority pilot(s) have canceled IFR and flown an approach anyway after dark. It’s tough to play along when the policies seem irrational, bordering on intentionally difficult.

In October 2015, FAA Administrator Michael Huerta acknowledged the obvious: While most pilots seek to comply with the regulations, we sometimes err simply because we’re human. (See “A Kinder, Gentler FAA?” IFR April 2016). We now have a regs book that’s over three inches thick. It’s probably impossible to fly without bending or breaking some obscure rule. If these regs are written in blood, shouldn’t their sheer mass improve safety?

No. Huerta observed that more regulation and an enforcement mentality is not the path to greater safety. After 40 years the rule book is a lot fatter, yet the GA accident rate remains stubbornly high. Huerta goes on to say that compliance rather than enforcement is now the preferred method of resolving issues. I can think of at least two recent instances in which inspectors behaved in an exemplary manner. But two anecdotes do not a trend make.

Instead, I still see enforcement without intelligence. In 2008, a flight school where I worked experienced three fatal flights in a six-month period. Under political pressure, FSDO inspectors came down on the flight school like a plague of locusts. They inspected every scrap of paper and found nothing out of order—not a small accomplishment for a school with 110 students and 25 airplanes. The accidents were unrelated, and the answer didn’t lie in paperwork.

Had the FAA threatened less and looked deeper, they would have found weak management of a flock of newbie, overworked instructors and poor maintenance. They would have found human factors issues too, but no one ever looked that deep, not even the NTSB.

While the inspectors were wallowing in paper, I hit the supervisor up for my Gold Seal. He was happy to oblige, saying, “This is the only useful thing I’ll accomplish today. I don’t even know why I’m here.” I could have told him: the ire of two congressmen who were petrified at the thought of airplanes falling out of the sky on their constituents. Lacking any concrete reason, the FAA eventually pressured (by threat of legal action) the school owner to surrender the school’s Part 141 certificate.

I submit to you that our native anti-authoritarian attitude is enhanced when we witness sloppy, arrogant, rude, inappropriate behavior—by inspectors who are fellow pilots, remember—who happen to work for the agency that defines authority for all of us.

We don’t get to cherry-pick rules. It’s zero-tolerance because the FAA knows that if they let one slip go, it leads down a slippery slope. Like/respect them or not, FSDO inspectors are the compliance and enforcement arm of the FAA. They carry a big stick and you have…the Pilot’s Bill of Rights.

Long ago, I got ramped by a grizzled but not unkind inspector. To my embarrassment, my medical had expired the day before. Rather than writing me up, he drove me to an AME. After reading the required letters off the eye chart and proving I had a heartbeat, I was legal again.

That was the FAA at its best. I was neither penalized nor overlooked. It was fair enforcement, and I never made that mistake again.

My friends, I think most of us hold aviation in such great esteem that we make every effort to obey the regulations. There is genuine pleasure in doing difficult things properly, by the book, as skillfully as we can. So we can do our best to meet the FAA’s “Compliance philosophy” by doing our best to comply. Almost every pilot I know feels this way.

Also a fact: Many of the ones who didn’t now push up daisies.

Fred Simonds is a G1000-certified CFII in Florida. See his web page at FredonFlying.com.