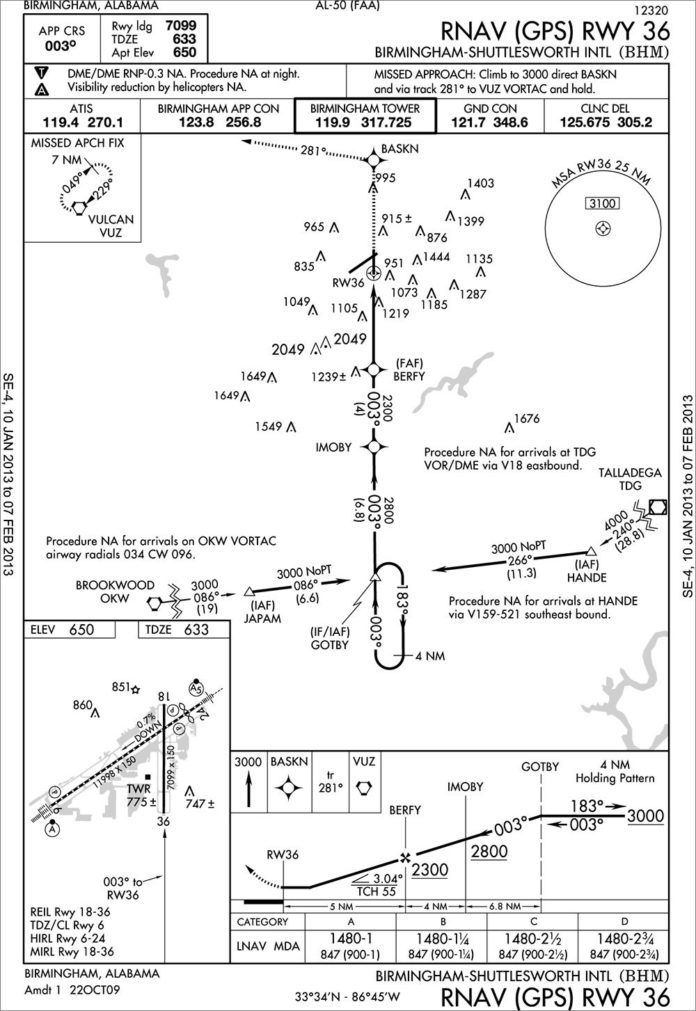 Recently, an airline began to receive notices that crews flying the RNAV (GPS) RWY 36 approach into Birmingham, Alabama (BHM) were receiving GPWS alerts while descending from the MDA to the runway. Since it wasn’t an isolated incident, the airline suspected that the approach was flawed and notified the FAA, who flight checked the approach. The results of that inspection are educational to instrument-flying pilots at all levels.

The procedure was designed correctly. More to the point, no GPWS alerts were received when the procedure was flown as it was designed. Flight inspection noted that a GPWS alert was received at the reported location if the aircraft continued to follow the published Vertical Descent Angle (VDA) below MDA. The airline (and several others) reported that it was their SOP to do so, pointing to the benefits of stabilized approaches and the use of a continuous descent angle.

For starters, AIM 5-4-5 i.1. calls out in bold-faced type: “the published angle is for information only” and “There is no implicit additional obstacle protection below the MDA.” That seems pretty clear. Apparently, we pilots just don’t understand exactly what’s below us when we descend below the MDA. It’s nice to think that the only thing there, is a nice wide chunk of pavement devoid of obstacles or terrain along the way, but that’s not necessarily the case.

Vertical Descent Angles
As a result of an NTSB recommendation following the controlled flight into terrain of American 1572 on approach into Windsor Locks, Connecticut, (BDL) in 1995, the FAA began to add vertical descent angle information to instrument approaches in 1998 in order to encourage stabilized approaches. Therefore, it is somewhat ironic that this additional information, which was intended to prevent CFIT accidents, has the potential to cause one.
The problem starts with us being conditioned to trust a glidepath, assuming that it will get us safely all the way to the ground. But, we really should be thinking about the source of that glidepath, whether it is an actual glidepath or just a calculated descent angle.

The computed descent angle on a non-precision approach below MDA does allow for a continuous descent angle to the runway threshold, but the potential exists to hit a few things along the way.

On this approach, a typical GPS would give the pilot an LNAV+V indication, for which a computed glidepath based on the published vertical descent angle is provided for advisory purposes. The vertical descent angle is just a simple geometric computation between the altitude at the final approach fix and the runway threshold crossing height. If the angle from the FAF results in a stepdown fix being crossed below the minimum altitude, the angle is computed from the highest stepdown fix inside the FAF that allows the calculated glidepath to remain above the remaining minimum altitudes.
The purpose of a vertical descent angle on a non-precision approach is to encourage stabilized approaches to the MDA, but not below, yet the glidepath indication allows the pilot to continue to use it below the MDA. A vertical descent angle by itself does not give any indication about what lies below the MDA. However, approach charts do provide some cues to pilots about the obstacle environment between the MDA and the runway.

Is It Clear Below?
Instrument approaches are developed using the notion of Required Obstacle Clearance (ROC), which specifies the minimum acceptable vertical clearance above the highest obstruction in the lateral Obstacle Evaluation Area (OEA). The size of the OEA and the amount of ROC vary by approach type and by segment within an approach. When taken together this forms the horizontal and vertical components of an Obstacle Clearance Surface (OCS).

For final segments on non-precision approaches, ROC is constant between the FAF and the MAP. For instance, on the LNAV final segment of the Birmingham approach discussed above, the minimum ROC is 250 feet between the FAF and the runway threshold. ROC can be increased due to factors such as precipitous terrain nearby, but cannot be decreased. This means that when you descend below the MDA of 1480 feet AMSL, obstacle protection is assured until reaching 1480 – 250 = 1230 feet AMSL. Below that, things get a little more interesting.

The final segment OCS is a hard surface, such as the GQS discussed above. If an obstacle penetrates it, the minimums must be adjusted so that the surface is clear. However, other surfaces are soft surfaces, known as Obstacle Identification Surfaces (OIS), in which penetrating obstacles are permitted and only result in penalties on the approach that do not affect the MDA.

The two surfaces associated with the visual segment are soft surfaces that are intended to identify obstacles a pilot would encounter while descending visually from the MDA to the runway. These surfaces start 200 feet prior to the landing runway threshold, rise at 20:1 and 34:1 slopes, and end at the computed distance of the VDP, regardless of whether the VDP is published.
The 34:1 surface equates to the OCS slope associated with a typical 3 degree ILS glidepath. If this surface is penetrated, nothing about the approach needs to change except the required visibility, which is limited to no less than 3/4 SM. If the steeper 20:1 surface is penetrated as well, visibility is limited to no lower than 1 SM, and a visual descent point will not be published (more on this in a minute).

Unfortunately, most approach procedures give no indication whether or not the visual segment is clear of obstructions. AeroNav GPS approaches indicate that the 34:1 slope on the visual segment is clear of obstructions through the depiction of a light grey stipple line connecting the course line to the runway in the profile view, while there is no indication at all on Jepp charts due to the requirement for international consistency.

Visual Descent Insights
Lacking a direct indication on the approach plate of the status of the visual segment, pilots can get the general idea by inferring details from what is published. Visual glideslope indicators (VGSI) and visual descent points (VDP) are two elements that can help with this.

You’d think that having a VDP published on the procedure would be a good indication that if you begin descent from MDA at that point, you won’t hit anything. Unfortunately, that’s not necessarily the case. Although the presence of a VDP tells you that the 20:1 visual surface is clear, it doesn’t tell you anything about the lower 34:1 surface. It might be, or it might not be. Additionally, the absence of a VDP doesn’t necessarily indicate that the visual surfaces are not clear, since criteria unrelated to the visual area may cause a VDP to not be published. Confused yet?

You can get a better idea about the obstacle environment below the MDA when a VGSI is installed at the runway you’re approaching. VGSI have hard surfaces at an angle of roughly 1 degree below the published VGSI angle, so as long as you stay on the visual glidepath, you will remain clear of obstacles. Granted, it’s not an exact substitute for the visual segment because the VGSI surface is limited to 4 miles from runway intercept, and is a different shape than the visual area, but at least it tells you something.

The Birmingham GPS approach doesn’t feature a VDP or a VGSI, so pilots really are left entirely to their own devices when leaving MDA, with the knowledge that the 34:1 visual surface is not clear, due to the absence of the stipple line. However, if an approach were to have both a VDP and a VGSI, there is a convenient interrelation for pilots. In these cases, the VDP is located based on the VGSI angle and threshold crossing height rather than the VDA, meaning that if descent begins at the VDP, the pilot will be protected by the VGSI surface.

Caveat Aviator
While shooting a non-precision approach on a foggy night, knowing that the only penalty for obstacles existing between you and the runway is a slightly increased visibility requirement doesn’t instill a lot of confidence and should probably make you nervous. Just like planning how you’re going to circle to your landing runway (if that’s in your repertoire) without losing the airport, pilots need to plan how they’re going to get from the MDA to the runway without hitting anything.

You’re ultimately responsible to see and avoid obstacles once you go below the MDA, so the safest course is not to follow any vertical nav indications below MDA. But it is useful to know the clues that might suggest obstacles ahead, as long as you remember that those clues offer no guarantees. Remember that the job’s not over until the tires are chocked.

As tempting as it may be to follow the vertical descent angle below MDA, that’s a bad idea. You need to know that it won’t lead you on a nice, stable, descent into a hill on short final. Without such assurance from actual charted vertical guidance other than the derived VDA, and without the benefit of a VGSI (inside four miles, remember), you’re left to visually avoid whatever is out there. That 20:1 surface penetration at BHM is why the approach is not authorized at night. (Extra credit if you already saw that.) Besides, if a respected airline has been doing it wrong, there is probably something about this we all can learn.

Lee Smith does TERPS work for Capitol Airspace Group in Alexandria, Virginia. He thanks them for letting him use some of their cool tools for this article.