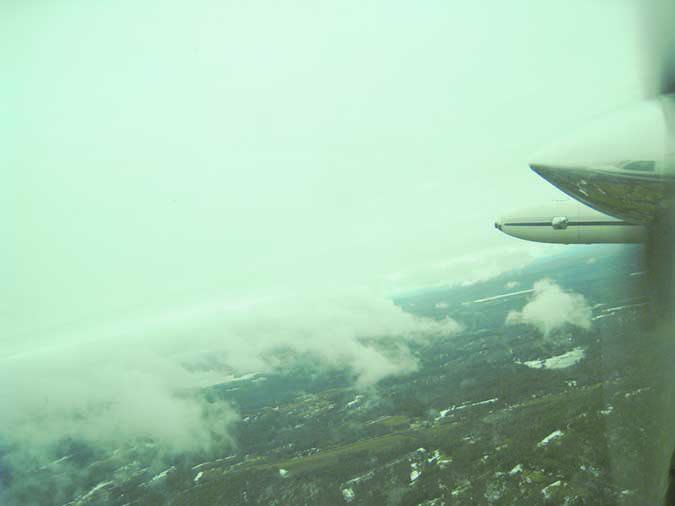 Everyone trains for that circle-to-land maneuver from an instrument approach, but there’s also an occasional need to fly circling departures. These can put you in the most marginal visual conditions waiting for the official IFR clearance.

The usual suspects—weather, obstacles and flying the airplane—all come into play when you’re in that murky transition between VFR and IFR.

Say you file an IFR flight plan departing a nontowered, unattended airport in the middle of nowhere. With no cell signal, you call Flight Service on a land line in the airport “terminal.” (Yes, such places still exist.)

The airport’s automated weather station reports a ceiling of 1200 feet overcast and visibility 10 miles, but the gray, misty look beneath that ceiling cues you in to the likelihood of poorer visibility once airborne. Winds are light from the east, so you plan to use Runway 12, which is 6000 feet long, instead of Runway 2, which is half as long.

While you’re accustomed to picking up your clearance in the cockpit from the local ATC facility prior to takeoff at your home airport, there’s no such thing here.

So your choices are to go back into the terminal and use that darn land line to get release and void-if-not-off times, which give you about 15 minutes or so to get airborne, or depart and get the clearance once you’re in the air.

You’re already in a funk from filing on a touch-tone phone, so launching at your own pace for an in-the-air clearance is mighty tempting. With clouds at 1200 feet, you could stay at pattern altitude over the airport, pick up your clearance in the air and then climb out. So you taxi out and prep for takeoff, depart Runway 12, and start a left-hand pattern at 1000 feet AGL while you call up the TRACON 25 miles away.

After a couple of calls and one lap over the runway, you discover that ATC can hear you only intermittently due to your low altitude, and can’t pick you up on radar.

To make matters worse, the visibility is more like a misty five miles and the ceiling seems to be more like 900 feet over the approach end of Runway 12 and 1200 feet on the other side. So to stay out of the clouds, you find yourself flying a second lap around the field a bit below pattern altitude.

ATC still can’t pick you up well enough to deliver your precious clearance, and on the third lap you realize that you can’t get any higher and don’t feel like going much lower, knowing that would kill your chances of getting out of there (if not just kill you altogether).

Time to get back on the phone.

Most of you (should have) picked up the legal catch right away. For those of you who’ve gotten a bit fuzzy on the VFR cloud-clearance rules, recall that a typical nontowered airport with instrument approach procedures has Class G from the surface to 700 feet AGL, which requires only a mile visibility and staying clear of clouds under visual flight rules.

But once you get more than 700 feet above the ground, you’re probably in Class E, which requires three statute miles of visibility and remaining 500 feet below the clouds. So technically, you weren’t maintaining VFR while you were circling about 1000 feet above ground while trying to get your clearance.

This also means it would have been perfectly legal to circle the airport at, say, 650 feet AGL. You would have remained in Class G and had a decent margin of cloud clearance. However, two-way radio communications with ATC would have been mighty hard to get.

Also note that if you were departing from one of those airports that have designated Class E to the surface, the 500-foot cloud clearance rule would have applied and you’d have had a harder time maintaining VFR in that airspace.

A Circle is a Circle

This begs the question: Would it have been safe to circle ‘round and ‘round Runway 12 at about 600 feet AGL while trying to get a clearance? This is clearly a judgment call by the PIC. But consider using typical circling approach minimums that average 600-800 feet AGL. So a pattern at 600 AGL is marginal for most insofar as pushing the safety envelope.

There’s also your circling area to take into account. Again, you’re trying to maintain VFR before you have an IFR clearance. Regardless of Class G or E rules, it would be wise to know your aircraft’s circling speed and radius if you’re trying for an in-the-air clearance in marginal visibility. The last thing you want to happen in this situation is to lose sight of the runway while this low.

This all means you can start with the published circling minimums when you consider departing VFR. Look at those numbers for minimum altitude and visibility. Add enough ceiling and visibility for the airspace in which you’ll have to circle. Review any areas that are NA for circling and obstructions. Remember that restrictions like “NA at night” should tip you off to a lack of lights or presence of obstacles.

Now you have minimum conditions to use for considering a marginal VFR departure. Just as you can use your comfort level and abilities to make your own approach minimums higher than those published, you can—and should—think the same way when determining circling departure minimums.

You must also consider how likely communication will be at that altitude. Do you remember how low you could contact ATC coming into the airport? That’s a valuable piece of information to get when you’re on your way into the airport if the departure might be IFR.

In some cases, departing under VFR and staying legal just isn’t feasible. At least this process means you can plan in advance and determine a comfortably high ceiling to get an in-the-air clearance, and not attempt to get one if weather is close to IFR conditions.

Up to now, we’ve assumed that everything in the aircraft is functioning properly. But what if you have a problem while waiting to get a clearance to enter the clouds?

If you are getting sufficient power but you didn’t like that funny sound the engine just made, you could choose to continue your climbout to a safer altitude, then return to the airport via ATC assistance and a straight-in approach.

Or you can stay in VMC and circle to land, which is likely the best choice if you’re underpowered and still within the traffic pattern. This option, to execute safely, really requires a ceiling that’s at least at circling minimums, and your own ability to execute such maneuvers for a given ceiling, whether it’s 600, 800, or 1000 feet.

Again, reviewing the circle-to-land approach minimums and restrictions means you understand your options. In fact, just like having a plan for your circling direction landing from an approach, you can have a plan for circle-to-land from a takeoff.

Of course, if it’s an emergency, everything is an option. Any runway or even taxiway would suffice for a precautionary or emergency landing.

If winds are strong enough to require a landing into the wind, or if landing spots are limited, a full-blown circle-to-land might be required. Or you could land off-airport if maneuvering isn’t a safe option. But at least you’re launching with a plan.

Depart with a Plan

Just like using approach minimums as a guideline for landing minimums, it’s a good idea to consider briefing on circling minimums to decide the minimum acceptable ceiling to depart VFR with intentions to continue your departure IFR when cleared to do so.

If you’re only willing to get an in-the-air clearance with no less than the high side of marginal VFR, like a 2500-foot ceiling, that’s even safer. Circling around an airport low and in restricted visibility is high risk.

Whatever you decide as your VFR departure minimum, just know where you are going to draw the line to ensure that you can stay both legal and safe.

Elaine Kauh is a CFII in eastern Wisconsin, which is just a half-hour flight from the middle of nowhere.