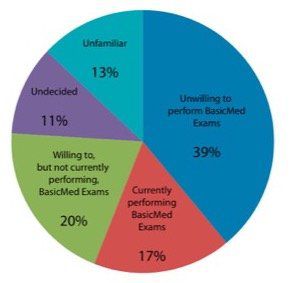 For the February 2018 issue ofIFR, I wrote “BasicMed Status Report.” In March 2018, with the help of the Flying Physician Association (FPA), I was able to conduct a survey of doctors on BasicMed and 79 members out of a membership of 531 chose to respond.

In preparing the results and considering insights from the survey, I was reminded of an old joke: A mathematician, an accountant, and a statistician were asked, “What is two plus two?” The mathematician answers directly, “Four.” The accountant ponders a moment and answers, “Well, it depends.” The statistician smiles broadly and confidently answers, “What would you like it to be?”

The point is that the survey had a relatively small sample size, the sample might not be representative of the overall population and the participants were self-selected. This means that the results might not be statistically valid; nevertheless, the insights I believe are interesting and worth exploring.

In the February article, I identified four demographics of physicians who should be approached to perform BasicMed exams: Aviation Medical Examiners (AMEs), Physicians who are also pilots and accustomed to working with the FAA, personal physicians or primary care physicians (PCP), and physicians in urgent-care/walk-in clinics who routinely do DOT, school, workers’ comp, sports physicals, etc.

Of course, these categories are not mutually exclusive. For example, physicians who are FPA members are usually pilots and some are also AMEs. Thus, the survey included doctors who are pilots and those who are AMEs.

I also want to add a few caveats. I’m not a physician or lawyer; I am an active general aviation pilot and CFI who is very focused on safety of flight. Nothing here should be taken as medical or legal advice. These are my opinions and are subject to change as time marches on.

The results of my survey are shown in the pie chart below. I was also able to slice and dice the data between AME and non-AMEs as summarized in the pie charts at the top of the next page. The numbers for non-AMEs are similar to all the respondents, while it appears that AMEs are less willing to perform BasicMed exams.

More insightful were the comments provided by the respondents who are not willing to do BasicMed. The major reasons doctors are not willing to perform BasicMed exams are 1) Liability; no malpractice insurance (common response from AMEs); 2) Lack of standards, possibly impacting safety; 3) Retired and no longer practicing; 4) Specialty not appropriate for BasicMed exams, e.g. surgery, ophthalmology, anesthesiology.

The decision of whether or not to do BasicMed exams is a very personal decision and any reason, for or against, must be considered valid and meaningful. Let’s examine some of these reasons in depth.

Physicians are exposed to medical malpractice when they misdiagnose or mistreat. Physicians don’t treat in the context of the BasicMed exam. In general, AMEs also don’t treat as AMEs.

The BasicMed exam follows a similar structure to an FAA physical with one big difference. In an FAA medical, the doctor needs to identify if body parts, organ systems and other general things such as blood pressure are: “Normal or Abnormal.” If the AME finds something abnormal, s/he must provide a narrative. By identifying an abnormality, the AME is making a diagnosis of sorts. In a BasicMed exam, the same body parts and organ systems only need to be “examined,” but not identified as “normal or abnormal,” thus no diagnosis is made.

In FAA physicals, AMEs must follow FAA guidelines as well as medical judgement; with BasicMed the decision to sign depends only on medical judgment.

Additionally, the outcome of an FAA medical is “Issued,” “Deferred,” and rarely, “Denied.” If there is a problem, AMEs typically don’t deny; they defer to Oklahoma City. If the medical is deferred or denied, the pilot is automatically grounded until further notice. With BasicMed, the doctor has a choice of signing or not signing the BasicMed form; similar in concept to a CFI not signing-off a flight review or instrument proficiency check. It’s pass or no record vs. pass or fail.

However, there appears to be an inconsistency between AMEs’ liability exposure expressed in the survey and reality. Recently, one of the FAA Regional Flight Surgeons told me that the FAA does not provide liability protection to AMEs. While the FAA will not defend an AME individually in medical certification litigation, the FAA will defend the medical certification process. AMEs do have two advantages doing FAA medicals. They can tap FAA medical resources to discuss issues that might arise with individual pilots.

Additionally, in cases where a pilot has a marginal condition, AMEs can always defer to the FAA. This makes it a bit difficult to understand why AMEs will not do BasicMed exams due to liability concerns. Furthermore, AMEs are told during periodic seminars by the FAA that they do not have liability protection while acting as AMEs. So, are the AMEs using liability concerns as an easy out not to do BasicMed exams or do they actually believe that the FAA is providing a defense against a malpractice challenge?

The bottom line is that for a BasicMed exam, the doctor does not treat or diagnose. This might reduce liability exposure. However, it comes down to a personal choice by the physician and perhaps also involves an insurance carrier.

I prefer to share the skies with fellow pilots who routinely have check-ups and are under medical treatment, when appropriate; as compared to pilots who don’t practice preventive care and are not willing to get treatment because it might impact their ability to get an FAA physical. BasicMed might encourage pilots to be more proactive in their medical care by requiring periodic no-risk exams and on-line medical courses (currently offered by AOPA and Mayo Clinic).

Additionally, BasicMed requires a valid U.S. driver’s license, not because it is a government issued ID, but because any relevant limitations on the license would apply to flying, like “must wear prescription glasses.” Some restrictions are ambiguous, like “no passengers”.

Each state has a different set of limitations. Since BasicMed is under FAA Flight Standards, I asked if they would issue a list of limitations that would apply to aviation. “No,” they said, apparently leaving it up to the pilot to decide. That also means the doctor doesn’t have the responsibility to decide if a driver’s license limitation applies to flying.

Additionally, in September 2004, the Sport License came into existence that only required a valid U.S. driving license and any limitations might apply to flying, just like in BasicMed. It has no requirements for medical exams, preventive care and on-line medical course. I have not heard of any aviation incident or accident that was a result of a precipitating medical condition in flight.

Regardless of pilot certificate, any pilot who only needs a third class medical, flies compliant aircraft below 18,000 feet MSL, is older than 40 years (Third Class physicals are good for five years below 40) might benefit. Additionally, BasicMed gets rid of most special issuances (SI) and the need to provide to the FAA expensive medical tests, usually on an annual basis. This is supported by FAA statistics that as of February 2018, 33.8% of BasicMed pilots had an SI on their last FAA physical compared to 6.3% of all pilots with SI.

However, a onetime SI is required for certain cardiovascular, neurologic and psychiatric conditions. An airman would need to get the SI though an AME. Conditions the AME can issue are also gone. However, any pilot must have been issued an FAA medical after July 2006 that was not revoked or denied. This means that any pilot who wants to fly with BasicMed must first have gotten an FAA medical. Lastly, the pilot must sign off that he or she is receiving medical treatment for any medical condition.

The “client” for an AME is the FAA since the AME is acting on behalf of the FAA. Actually, the FAA issues physicals, the AME collects the data; just like a designated pilot examiner does not issue FAA pilot certificates, the FAA does. The client of any physician—AME or non-AME—who conducts BasicMed exams is the pilot. This may be more an issue with AMEs in that they must internalize that the client has changed.

Finally, 61.53 Prohibition on Operations during Medical Deficiency still applies to BasicMed. Informally, this rule requires that each pilot self-certify for fitness before every flight.

You should not have any problem finding a doctor willing to do a BasicMed exam. It might take some work and when you do find one, let other pilots know about that doctor. I believe that the AOPA is compiling a list of doctors willing to do BasicMed exams.

Fully understand BasicMed and be able to articulate what it is and how it works to doctors, to CFIs, designated pilot examiners, and even FAA inspectors.

Perhaps most important, the requirement for self-certification before each flight remains.

Luca F Bencini-Tibo swears that he has not played a doctor or lawyer on TV.