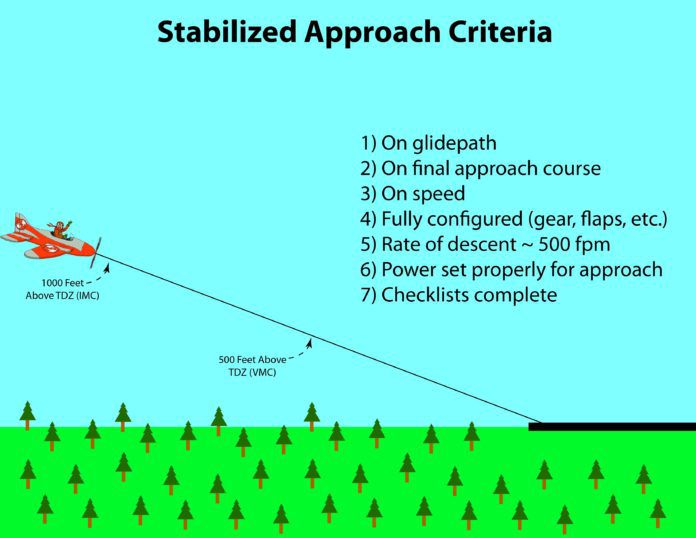 Shortly after getting my Cessna 340, one afternoon I was flying an ILS into Modesto, CA, where we’d found a temporary home for our airplane. I’d recently achieved the heady milestone of 1000 hours total time and a whopping 100 hours of multi-engine time. Plus, I’d just gotten all my I’s (CFI, CFII, MEI), so, of course, I was truly a great pilot. I’d then gotten my initial training (ground and sim) in the 340, finished off with 25 hours with an experienced Twin Cessna instructor pilot. Humility wasn’t in my self-image that afternoon. By evening, it had returned with a vengeance.

Feeling confident in my abilities and skills in the 340, I undertook the ILS to minimums at Modesto. The wind was light, there was no precip, and it was reasonably warm. I just couldn’t see nuthin’.

George and I were doing okay, having captured the localizer on altitude outside the FAF. I was getting configured but was a bit behind the airplane. As we hit the FAF, George grabbed the glideslope and we were headed toward the numbers. But, I wasn’t yet fully configured—gear down and some more flaps were next, plus reducing power for the descent.

What a ride! As the gear and flaps came down, with the power change and the descent on glideslope that just began, the autopilot didn’t have a chance. The control column started pumping like it was possessed. “What the…?” While I had been monitoring, my overconfidence meant that I really hadn’t been watching that closely. To say I was surprised and startled was like saying Everest is a nice hill.

I finally hit the disconnect button, telling George to take a break. I spent a few seconds trying to save things but I quickly realized they were beyond help as I watched the glideslope needle go a couple dots high, then low, then high… Finally back in the game I flew the missed approach and tried again.

You can imagine how I obsessed about that adventure the rest of the day. I even checked the POH where it essentially said I needed to be configured before intercepting the glideslope. There might be something to the stabilized-approach concept if even George couldn’t handle it.

The FAA on Stabilized

My little adventure taught me that I need to stay ahead of the airplane, and to fly a stabilized approach. FAA Advisory Circular 61-98C is a guide for flight reviews. It contains a lot of good information, but specifically section 2-1.d. covers Stabilized Approaches. The goal of being stabilized is the same for flight in IMC and in VMC, but you should be stabilized no later than 1000 feet above the touchdown zone in IMC that’s relaxed to 500 feet in VMC. I’ve personally flown under those guidelines ever since Modesto. They work. To help, I’ve added a “1000—stabilized” call to my routine.

The AC lists seven criteria for a stabilized approach that I’ve interpreted for our purposes: 1) You’re staying on the correct glidepath with only minor corrections. 2) You’re staying on the runway extended centerline or the final approach course with only minor corrections requiring under 15 degrees of bank. 3) You’re maintaining airspeed within +10 and -5 knots of your target for the approach, per the POH. 4) Gear, flaps, props, mixture, trim, fuel, etc. are all properly configured for landing per the POH. 5) Your rate of descent is constant at no more than 500 fpm or the normal rate for your aircraft when configured for this segment of the approach. 6) You’re maintaining the proper (non-zero) power setting with only minor changes to adjust for wind and glideslope deviations. 7) All checklists are complete except the final items that are normally completed closer to the ground (such as final flaps).

The AC notes in bold print that if for any reason your approach becomes unstabilized below 300 feet above the runway, bug out. Don’t try to fix it.

Even the best of us occasionally push (okay, shatter) the limits in the AC without ill effects. Do this often enough and we become conditioned to accept this exceedance of the limits as the new norm that becomes acceptable.

Most airlines codify a stabilized approach into mandatory procedures. Nonetheless, they’re often viewed by pilots as goals, not hard limits. Consequently, some pilots get so comfortable pushing the limits without consequence that eventually they push the limits so far that there are consequences like damaged equipment and careers that are abruptly ended.

So, what’s the practical answer? Some might use limits like these as absolutes—if you’re IMC and you’re not stabilized by 1000 feet, abort even if the trend will result in being stabilized in another couple seconds. This, of course, is the most conservative approach. If that works for you, then use it and stop reading right here. If you read further, you’ll send me a nasty letter that I don’t want.

In general, absolute rules in aviation are good. Things like approach minimums, weather limits, runway requirements are all good places for these hard limits. Other limits, like those involving skill and personal performance tend to be thought of as a bit looser. For example, the basic instrument checkride has a 100-foot tolerance on altitude assignments. I’d bet that, like me, you exceeded that on your checkride, but probably briefly as you were correcting. For most examiners, that’s good enough.

So, given that these personal performance limits might not be absolutes, what should you do? Well, it’s up to you to set your own guidelines, your own requirements. I’ll tell you what I do only as an example and perhaps from all of this you can decide how you should proceed.

First, I’m going to point out that this is not a theoretical discussion. I take stabilized approaches (IMC, VMC or even just doing touch and goes in the pattern) very seriously, as you should. We’re just exploring what “stabilized” might mean from a practical standpoint.

There are two aspects of this to consider. One is by when you will be stabilized and the second is the definition of “stabilized” that you’ll use. I use the same 1000 feet for IMC and 500 feet for VMC as the FAA, but I relax that a bit to accept that I’m okay if I’ve taken the last step to be stabilized but haven’t yet fully achieved stable flight. For example, perhaps I just finished configuring gear, flaps, trim, power, etc., but the aircraft is still reacting to those settings. I know in a few seconds with little or no further input I will be stabilized, but according to the strict definition, I’m not yet. That’s good enough for me.

By the same reasoning, my definition of stable flight isn’t quite as tight. I’m okay when things are coming in, even if they’re not quite there yet. Speed, as above, is a good example. Another is power and trim that might need more tweaking as the speed dials in. Also, if my speed is high but decreasing, my rate of descent might be a bit high, or perhaps I’ve got to react to a strong wind change. Again, as long as I’ve taken the steps I need to become stable or regain stability, that’s good enough for me.

There are a couple places where I will not compromise. I won’t accept any meaningful deviation from lateral and vertical guidance. That’s an absolute. Plus, I prefer a max bank of five degrees for lateral corrections. Next, I tighten the speed requirements of being stable to just 5 knots with a goal of not getting slow at all. Those items are more critical to me as they’re the kind of thing that will kill me.

Always Been That Way

I learned to fly well before “stabilized approach” was in the vernacular. But I had a primary flight instructor who intrinsically understood the concept. So even while we were boring around the pattern making circuit after circuit so I could actually learn to fly and land that mighty beast, he always made me do the same things at the same times at the same altitude and airspeed at the same places. In other words, he insisted on a stabilized approach without using those words.

Those words, though, are an important concept to guide your safe flying. All you have to do is figure out what they mean to you and then make sure you do it.

Frank Bowlin likes to go rogue once in a while. He’ll occasionally fly a very unstabilized approach to see if he can save it. So far, he’s about 50/50 between saving the day and completely blowing it—in the sim, of course.