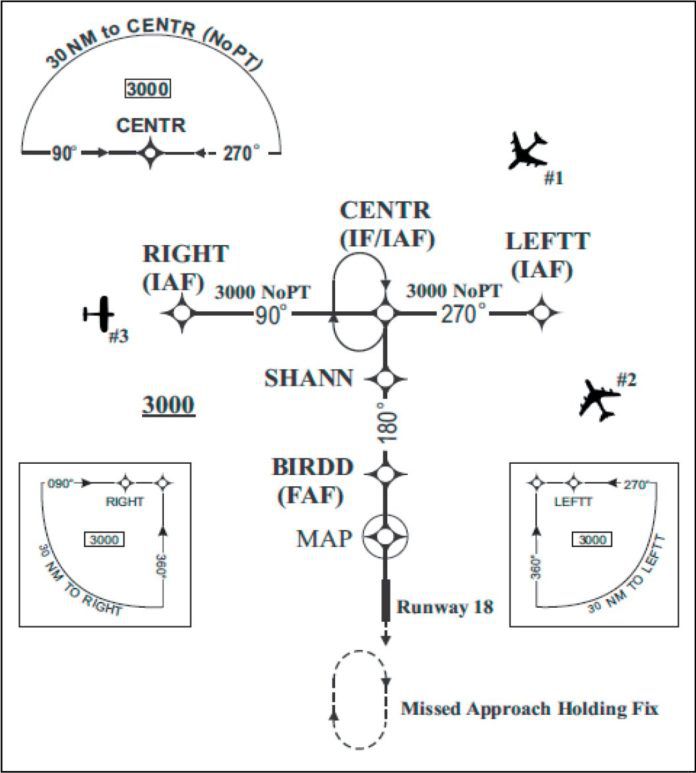 There’s little that’s more essential to an instrument pilot than the approach clearance. We controllers issue them all day long. I fully expect much of my frequency time to be spent issuing approach clearances for either training flights or weather-related needs.

Routine or not, an approach can have a lot of nuances. Its sole purpose is to safely get an aircraft from the air to the ground in bad weather. The pilot is busy managing everything to fly that approach. My job as a radar controller is to make your job as successful and effortless as possible. After all, you’re the one in the soup, not me….

When I first started training on radar, my instructors beat a simple acronym into my head: PTAC, pronounced “P-tack.” That little term reminded me of all the required core elements in a good approach clearance: position, turn, altitude, and clearance. Each of those components and ATC regulations contribute to getting you to the runway via a stable approach.

The “position” part is easiest: issue the pilot’s distance from a point on the approach. That fix could be an IAF, FAF, a navaid used for the approach, or the airport itself.

Keep in mind that we’re usually “eyeballing” this distance. While our radar does have tools allowing us to measure precise distances, we often simply don’t have time to use them. We rely instead on mileage “tick marks” drawn on our radar maps. Each mark is either a mile or half a mile, depending on the facility.

Over time, we develop an eye for it, but it’s still an estimate. We’re gauging moving objects, affected by varying winds, tracked by radar that’s a few seconds behind. So, if you’re showing you’re 3.6 miles from the FAF, and ATC says, “three miles from [FAF name],” it’s okay. Obviously, if it’s off by a significant amount, or they say the wrong fix, question it.

I’ll add that this particular rule was written long before GPS. The fact is, with the tools in modern cockpits you probably know exactly where you are. However, we still give the distance to enhance situational awareness for those without the fancy toys.

Terminal Arrival Areas (TAAs) make a controller’s life a bit easier, and can greatly simplify the clearance. In the TAA, the PTAC “T” is a clearance direct to the IAF. The “A” is built right into the chart. So, according to the 7110.65 paragraph 5-9-4 (e), the controller just needs to give a position and issue the clearance.

Per the Instrument Procedures Handbook, “Once cleared for the approach, pilots may descend in the TAA sector to the minimum altitude depicted within the defined area/subdivision, unless instructed otherwise by air traffic control. Pilots should plan their descent within the TAA to permit a normal descent rate from the IF/IAF to the FAF.”

This TAA is specified by the three arcs extending 30 miles from each fix. Once cleared for the approach, the pilot is expected to maintain any previously assigned altitude until inside that arc. Aircraft 1 and 2 could start their descent immediately to the TAA sector’s altitude, 3000 feet in this case. Aircraft 3 would have to wait until it’s inside 30 miles from RIGHT.

TAAs have caused confusion for both pilots and controllers. A little extra verbiage might ease the mind. If there’s traffic or another concern below Aircraft 3 prior to it entering the sector, a controller may emphasize, “Maintain 4000 until inside the TAA.” It wouldn’t be a bad idea for the pilot to state, “Leaving 4000 for 3000,” when starting descent. The Handbook has a lot more info on TAAs.

Now we’ve got an idea of your position. How are you getting from there to the approach? ATC can either clear you via an initial approach fix, or via radar vectors to a portion of the approach. Those direct “fix” clearances or headings must, again, be issued in compliance with ATC rules.

For “fix” clearances via an IAF, we must first tell you to proceed direct to the fix in question and issue an altitude to maintain until you cross that fix. “Seven miles from FIXXX. Proceed direct FIXXX. Cross FIXXX at 3000, cleared RNAV Runway 18 approach.” However, ATC must remain cognizant of the kind of turn you must make when you hit that fix and need to turn towards the approach. Some approaches have procedure turns built-in, allowing you to hit that fix from any angle, make the PT, and come back in on the approach.

However, if we’re expecting you to proceed directly to the IAF and turn on to the approach straight-in we must ensure that turn to the approach course is no more than 90 degrees. Just the hard 90-degree turn on its own can be tough for some pilots to manage, resulting in spill-outs and corrections. Making a sharp U-turn isn’t at all conducive to a stable approach.

That same desire for a stabilized approach guides the FAA’s controller regulations for issuing vectors to final. Whereas clearances via IAFs have 90 degrees of leeway, vectors to a final approach course have much tighter tolerances, since you may be joining well inside any IAFs.

If our vector has you intercepting between zero and two miles from the gate (i.e. within three miles of the FAF), we can’t use more than a 20-degree intercept angle. For an ILS whose localizer is 090 degrees, intercept headings are between 070 and 110. For an intercept over two miles from the gate, we can use up to 30 degrees (060-120 in the example), since you have more time to get established.

In some cases we aren’t allowed to intercept inside two miles from the gate. Weather is one. We must add the extra mileage if the ceiling is less than 500 feet from our Minimum Vectoring Altitude or the visibility is less than three miles—getting extra time to get stabilized is helpful. Also, vectors to final for an RNAV approach gets the added distance, in part to allow the GPS time to verify it’s captured the approach properly and increase sensitivity.

Can you be vectored closer than the approach gate? Yes, but you need to ask for it. In section 5-9-1 (a) of the 7110.65—it says: “If specifically requested by the pilot, aircraft may be vectored to intercept the final approach course inside the approach gate but no closer than the final approach fix.” Basically, if you ask for it, I can vector you directly at the FAF. This doesn’t apply to RNAV approaches for the reason listed earlier.

Does the runway always have to be part of an approach clearance?

Not necessarily. Given that an approach’s purpose is to get you to a runway, shouldn’t ATC always specify that runway in the clearance? Actually, the 7110.65 allows us to skip saying the runway if there’s no runway ambiguity.

For instance, if an airport has an ILS Runway 9 approach, but three RNAV approaches to other runways, I don’t have to state “Runway niner” if I clear you for the ILS—position, turn, altitude, and “Cleared ILS approach.” If there’s only one ILS, logically that’s the only one you can fly. However, I’d need to define the runway if I clear you for an RNAV approach, since there are three possible choices.

If I’m feeling especially carefree, I don’t even have to say the approach name. “N123AB, one zero miles from [airport]. Cleared approach.”

Per the Pilot/Controller Glossary, “cleared approach” grants “ATC authorization for an aircraft to execute any standard or special instrument approach procedure for that airport.” You have permission to fly any approach you want to that airport. Want an ILS? An RNAV? An NDB? Do what you want.

AIM 5-4-7 (e) provides more guidance: “…pilots must execute the entire procedure commencing at an IAF or an associated feeder route as described on the IAP chart unless an appropriate new or revised ATC clearance is received, or the IFR flight plan is canceled.”

Now, the glossary does throw some cold water on the proceedings: “Normally, an aircraft will be cleared for a specific instrument approach procedure.” In the real world, most controllers simply have too much traffic to write a blank check and let the pilot go nuts. But, it can happen if it’s quiet out there. —TK

Obviously, we can’t let you descend before it’s safe. Per 7110.65 5-9-4 (c) we must, “Issue approach clearance only after the aircraft is … assigned an altitude to maintain until the aircraft is established on a segment of a published route or instrument approach procedure.”

The route of an instrument approach has been checked and ensured to be clear of obstacles and terrain. However, until you are established on that approach, ATC must ensure you stay above those threats.

That “at or above” restriction must consider aircraft performance and permit a stabilized approach. Expecting a pilot to drop 5000 feet in five miles won’t work. Controllers have to plan ahead and—like the turns to final—descend the aircraft early enough to put it in good position for the approach.

Altitude is also used for traffic separation. Imagine you’re holding over an airport’s VOR at 3000 feet, requesting a VOR approach with a full procedure turn. Traffic is inbound, descending out of 2000 on the same approach. I can tell you, “Proceed outbound on the VOR approach; maintain 3000,” without an approach clearance. You’re cleared for the approach’s plan view, but not the vertical profile, instead holding 3000.

You’re outbound at 3000. The other guy is inbound at 2000 on final. If you start your descent now, you’ll drop right into him. But, you’re outbound for the procedure turn. As long as you don’t descend before then, you’ll both be safe. So, I’ll just say, “Maintain three thousand until procedure turn inbound. Cleared VOR Runway one eight approach.” Using good timing and altitude control, we can work traffic more efficiently.

There’s often other traffic, and if you unexpectedly fly a procedure turn, things could get ugly. Here’s a tip: unless you and the controller have already, explicitly discussed the procedure turn or used the term “full approach,” confirm with ATC. “Approach, do you want a straight-in approach, or a procedure turn?” At times, procedure turns are prohibited (“NoPT”).

Of course, there are approaches with no straight-in runway and no runway in their title. They have only circling minimums and are named with a letter (VOR-A, RNAV-B, etc.). Commonly, the approach isn’t aligned within 30 degrees of a runway. It might require an unusually high descent rate, or the runway lacks sufficient marking or differentiation to meet straight-in requirements.

So, let’s fire off some PTAC. Requesting an ILS to Runway 9? “N782RT, six miles from [FAF]. Fly heading 130. Maintain 2500 until established on the localizer. Cleared ILS Runway niner approach.” Requesting the RNAV (GPS) Runway 18 with a circle to Runway 9? Oh, and the RNAV has a published procedure turn? “Eight miles from [IAF]. Proceed direct [IAF]. Cross [IAF] at or above 3000. Cleared straight-in RNAV Runway one eight approach. Circle to Runway niner”.

While there are other nuances, beginning with effective use of the basic pieces—position, turn, altitude, and clearance—ATC can help you safely and comfortably get down to the ground.

Tarrance Kramer shoots for smooth descents and easy turn-ons to final while working traffic in the Mid-West.