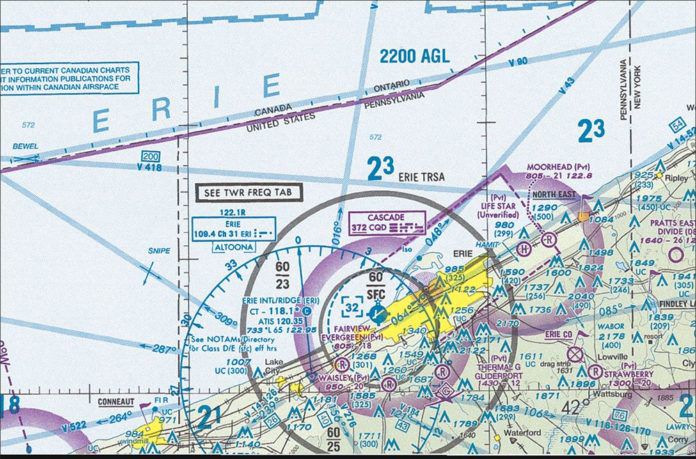 We love moving maps, be they in the panel or on the portable. Just remember that they don’t always show all the airspace, or even show it in the same way.

In-betweens are always tough, and have the potential for trouble. Flying some IFR practice in VFR conditions is a perfect example. You’re emulating one set of rules (IFR) but you’re actually bound by another set (VFR). There are all sorts of potential traps here: maintaining cloud clearances, conflicting with traffic you’d normally be separated from, and blundering into airspace without the required communication or permission.

The latter took on a new twist when I heard from a reader who busted some airspace that we often forget about: the Terminal Radar Service Area (TRSA). Lucky for him, TRSA participation is voluntary, so it’s a crime of convention rather than regulation. But it brings up the interesting point that airspace isn’t always depicted, and when it is, it isn’t always depicted the same way.

Backstory
The TRSA is airspace from the land that regulation forgot, an appendix to the U.S. airspace system that didn’t have an ICAO equivalent when we switched to the international Class A, B, C, D, etc., system.

The closest thing to a TRSA is Class C airspace. The dimensions are often similar and the services offered are essentially identical. TRSAs have an approach facility as well as a tower for the Class D airspace and airport at their heart. So if you were VFR and approaching Erie’s TRSA, you could contact Erie Approach, who would assign you a discrete squawk code and radar identify you. They’d hand you off to Erie Tower for landing. Departing the TRSA under VFR, you would contact Erie Clearance Delivery with your departure route and altitude and get a squawk code for departure.

Or not. Unlike Class C airspace, TRSA participation is voluntary. You could fly right through a TRSA never talking to anyone and not have to submit a NASA form or call a special phone number (so long as you didn’t also bust the Class D airspace inside the TRSA). Departing the central airport of the TRSA, if you call Ground first, you’ll probably be told to contact Clearance Delivery, but you can “decline radar services” and get permission to taxi and depart on a 1200 squawk if that’s your want.

However—and this has tripped up more than one pilot—once you participate, then you must comply. By accepting the squawk code, you are also accepting ATC control. If they vector you, even VFR, you are bound to take the vector or give them an “unable.” You can’t start off participating and then just decide to do your own dance without first letting them know and getting permission.

All this goes for practicing approaches within the boundaries of the TRSA, even if not actually at the central airport. You can practice all you want with a 1200 squawk and only talking on the CTAFs for the local airports, or you can contact the Approach facility and get traffic advisories while you do your approaches. But if you do the latter, and they assign you a vector when you contact them on a missed approach, that’s an ATC clearance and must be treated as such.

Seeing TRSAs
So, how do you know it’s a TRSA? They’re shown on Sectional charts with solid black lines, similar to the solid magenta lines of Class C. However, unlike Class C, TRSAs aren’t depicted at all on IFR en route charts or WAC charts. There’s not even an indication that it’s a TRSA when you look at the information for the central airport; it simply says Class D.

It’s gets more confusing when you look at digital charting solutions and moving maps. Obviously the digital versions of Aeronav charts show the same thing the government’s paper versions do. But some systems show pop-up menus to see airspace limits, which you’re unlikely to get those for the TRSAs. Some systems offer terrain maps that show airspace or vector drawn maps instead of digital versions of paper charts. We’ve seen that on programs like WingX, Anywhere Map or Jepp FD these maps omit TRSAs. Garmin’s Pilot app for iPad switches automatically from sectional to WAC when zooming out. In this case, the TRSA may “vanish.”

Moving map navigators vary in their depictions, even within one company. Older Garmin GNS 400/500 GPS units shows all Class B, Class C, and TRSA airspace in green outline. Older Garmin portables show TRSAs in blue, like Class B. Newer Garmin portables and Garmin glass-panel systems like the G1000 show TRSAs like Class C airspace in magenta. The only way to know which is which is to scroll over and get the pop-up details.

The lesson here is to both know what your system(s) do with airspace and check with a VFR chart just to make sure you know what airspace is there. Also remember that zoom level or custom settings could turn rendering of a specific kind of airspace off even if your system has the capacity to show it.

Play Along, Or Ignore?
Once you know your IFR practice will take you in and out of TRSA airspace, the question becomes whether you should participate.

I see virtually no reason not to. By the very fact that they are TRSAs and not Class C airspaces, it usually means they aren’t so busy they can’t (or won’t) accommodate special requests. You get the bonus of traffic advisories and the option of real ATC vectors for practice. It also seems generally true that controllers within TRSAs are touchy about their somewhat second-class status. You might as well boost their self esteem a bit. It’s good for everybody.

Just be sure you know what they look like on the map.