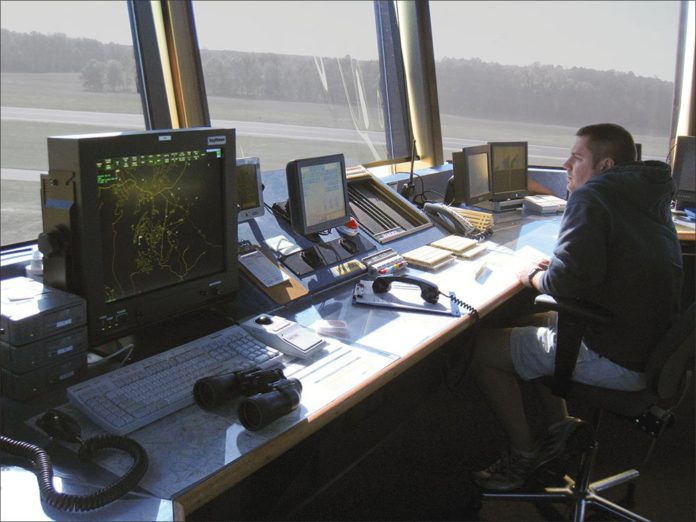 ASOS myopically reports conditions when unattended. It won’t spew out random observations, but it can’t be counted on for an accurate and complete picture in all situations.

ASOS lies. Yes, you read that right. We’re not talking about blatant fabrications so much as lies of omission. But its an inaccurate picture none the less.

How can this be? ASOS is supposed to provide an accurate representation of the weather conditions significant to aviation at an airport. Surface observations are an important part of any preflight weather analysis. They’re also critical to your planning for an approach and landing.
However, the ASOS has a subtle dark side that most pilots are unaware of.

What’s even scarier is that many forecasters are equally clueless.

Can’t Say That
It’s probably not news that automated systems can only measure the weather that passes directly through the sensor array. It’s not able to report what’s happening outside the airport’s runway complex. For example, if a heavy rain shower passes through the approach corridor of an airport reducing the ceiling and visibility, it won’t be detected by the automated observing system at the airport.

Trained weather observers located at some airports can augment the observation to add these details, such as including showers in the vicinity of the airport (VCSH). But, of the nearly 900 ASOS sites throughout the U.S and its territories, only 15 percent (about 135) of the surface observations are augmented.

ASOS can only report one precipitation type at a time. If both freezing rain and snow are detected, snow is reported and freezing rain is dropped from the observation. Once again, if this at an attended site, the trained observer can augment the report to include both snow and freezing rain.

ASOS or AWOS?
Pilots rarely care if the surface observation is generated by an ASOS (Automated Surface Observing System) or its commercial counterpart, the AWOS (Automated Weather Observing System). But you should care. Let’s assume that a surface observation is automated (AUTO) and is reporting light drizzle (-DZ). Is this observation from an ASOS or AWOS? If it is truly automated—not augmented by a human observer—then it’s an AWOS.

How do we know? According to Scott Landolt who is a member of the ASOS Test Review Board and also teaches an instrumentation class at Metro State College in Denver, “The operational ASOS, in its current state, does not have the capability to automatically report drizzle.” The reason is that the ASOS PI sensor is incapable of detecting drops that are less than 500 microns (0.5 mm) in diameter. That’s drizzle size.

Landolt says that AWOS can detect drizzle because, “AWOS specs are much less stringent than ASOS. There is no real standard for the [AWOS] equipment.” He also cautions, “We’ve tested a few [AWOSs] and they also can output freezing drizzle (FZDZ) and freezing rain (FZRA), but they rely on temperature measurements (and not actual accretion) to make these determinations. So if a site is not augmented and does not have a freezing rain sensor, which I doubt most AWOSs would have, and you see it reporting FZDZ or FZRA, it may or may not be correct.”

False-alarm rates, or reporting precipitation when none is occurring, are also required to be less than 0.2 percent. AWOS equipment doesn’t have to meet these strict requirements.

So if drizzle is reaching the surface, what will ASOS report? If it’s below the threshold of 0.01 inches per hour, according to Landolt, it’s likely that no precipitation will be reported. He also added that, “UP (unknown precipitation) is possible, but BR (mist) would be the most common report.”

As an obstruction to visibility, a report of mist is strictly derived from the surface visibility and temperature-dewpoint spread and has nothing to do with precipitation, as many pilots are taught. In other words, mist is reported every time when the visibility is between 1/2 and 7 statute miles and the temperature-dewpoint spread is less than or equal to 4 degrees Fahrenheit. This is independent of precipitation that might be reaching the surface.
On occasion drizzle may elevate either the high- or low-frequency channel of the PI sensor sufficiently to be reported as light rain. When drizzle is falling and the temperature is below 38 degrees Fahrenheit, the sensor may interpret the scintillation pattern created by these suspended water drops as light snow.

The only way you’ll know whether it’s an ASOS or an AWOS is by looking in the A/FD.

Why Should You Care?
What’s a little drizzle between friends? Drizzle can seriously limit forward flight visibility on an instrument approach, even below the cloud bases. And there’s a lot more stuff in the air and on the windscreen that can make finding the runway much more challenging. This could come as a big surprise to you if you expected clear or mist and are instead watching water running over your windscreen as you look for the lights.

Much more significant is that during the cold season and depending on the temperature profile aloft, drizzle reaching the surface is an excellent indicator of supercooled large drop (SLD) icing in the air or clouds above the surface. This is referred to as freezing drizzle aloft. That’s true even when the surface temperature might be warmer than 0 degrees Celsius.

If the surface temperature is below freezing, the potential for serious icing at the tail end of the approach is significant. The lack of a freezing drizzle observation could lead the pilot to make the wrong decision and ultimately lead to disaster. And, if there is freezing drizzle in the AWOS report, you might think several times before flying that approach.

The NWS has been testing the next software build for the ASOS. This software includes a freezing drizzle algorithm that was developed by Allan Ramsay over 10 years ago. About 15 test sites ran the code through last winter. There’s a possibility the new code will be in all ASOS sites by the time you read this. However, non-freezing drizzle will still not be automatically reported until a new sensor has been selected. That’s likely to take years.

What To Do?
There’s not much a pilot can do beyond being aware that this situation exists. Remember that all METARs marked as AUTO could be subject to these issues. The best we as pilots can do is not let down our guard and assume the sky beneath the clouds is exactly what the METAR or automated voice claims.

I’m sorry dave, I can’t report that right now
If you pay attention to the issuance time on METARs, you will notice that many are issued a few minutes before the top of each hour. This allows the observation to be transmitted and ingested into other computer systems, such as those that run numerical weather prediction models, that get executed at the top of the hour or shortly thereafter.

This period of time between 47:20 and 53:20 minutes after the hour is known as the “lockout period.” During this period, the ASOS is prevented from issuing any other reports, including special reports (SPECIs), no matter what weather may be occurring. The ASOS still continuously monitors and records the weather during the lockout period; it just can’t issue a surface observation.

This does not affect the one-minute weather you receive by calling the voice phone link or by the ground-to-air radio broadcasts (where they exist), but it will affect any formal observations that get transmitted to flight crews, air traffic controllers and meteorologists at the Center Weather Service Units (CWSUs).

For example, assume that a severe thunderstorm moves through the automated sensors within this lockout period, producing heavy rain, reduced visibility and strong, gusting winds. During any other time period, a SPECI will be issued, as was done at 1915Z with the approaching storm show below. However, during the lockout period, this SPECI is recorded by the ASOS, but will not be disseminated—no forecasters or pilot will ever hear about it.

The NTSB has been trying to persuade the NWS to eliminate the ASOS lockout feature since 2001. There’s been no luck so far. —S.D.

Scott Dennstaedt is a recovering meteorologist and CFI. His website is avwxworkshops.com.