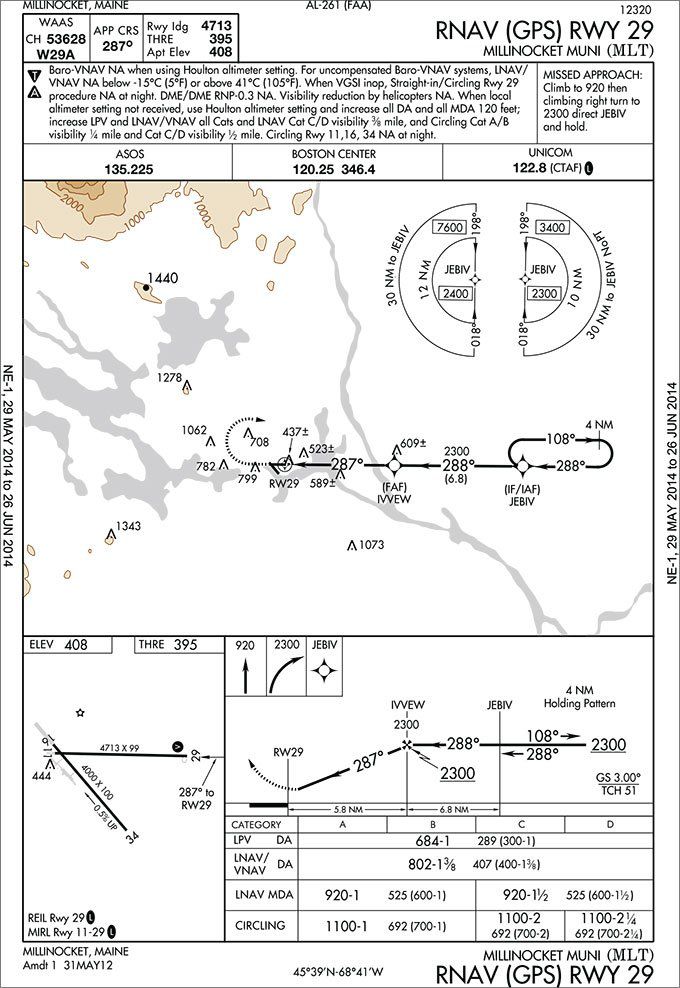 The Terminal Arrival Area has been dissected and rehashed a lot. For those of us who became instrument rated when, say, Loran was cutting-edge technology, the TAA is a bit of a paradigm shift for approach planning. If you were raised “/G,” it’s just another navigation parameter.

We’re going to look at a TAA that doesn’t meet the cookie-cutter definition—the RNAV (GPS) RWY 29 at Millinocket Municipal Airport (KMLT) in Maine. As with a lot of northern New England, there are some considerable variations in terrain in the KMLT area, so it’s no surprise to see some variations from a typical flatland approach.

The TAA Isn’t Another MSA
The Terminal Arrival Area, per AIM 5-4-5d, is a method of providing a seamless transition from the enroute environment to the IAF of an RNAV approach. Thanks to point-in-space navigation of GPS, the standard 25-nm Minimum Safe/Sector Altitude found on other approach charts can be replaced with a TAA, providing both the 1000 feet of obstacle clearance of an MSA plus a blanket area in which to descend to the IAF altitude.

If approaching the TAA and cleared for the approach, within 30 nm of the selected fix you can continue towards the IAF and descend to the published TAA altitude for your sector. The “seamless transition” from the enroute portion of the flight should be accommodated by the design of the TAA which, according to AIM 5-4-5d.9, should either be traversed by an airway, or entered by a published feeder route when no airway crosses the TAA boundary.

FAA Order 8260.45A “TAA Design Criteria,” says the feeder route must be a …route from an airway fix or navaid to the TAA boundary aligned along a direct course from the en route fix/navaid to the appropriate IF(IAF) and/or T IAF(s).

One of the things that sets this approach apart is that it breaks from the description of the TAA given to us in the AIM. Paragraph 2 of AIM 5-4-5d says, The RNAV procedure underlying the TAA will be the “T” design (also called the “Basic T”), or a modification of the “T.”

The modification here is that there isn’t any “T,” and it resembles a standard IAP, with a hold-in-lieu-of-procedure-turn course reversal. You might even expect to see the familiar MSA circle.

A bit further, in Paragraph d.3 we get some explanation. The “T” may be modified by the procedure designers where required by terrain or air traffic control considerations. For instance, the design …may even have one or both outboard IAFs eliminated resulting in an upside-down “L” or “I” configuration.

There are not likely too many “air traffic control considerations” in northern Maine; however, the terrain up that way can be a consideration. While the area right around the airport isn’t really mountainous, Mount Katahdin, Maine’s highest peak reaching nearly 5000 feet above the airport, is less than 20 miles northwest. When it comes to IAP design and TERPS-required terrain clearances, that kind of obstruction at that distance is going to present some challenges.

Where Ya Comin’ From?
In the absence of the standard “T” and right base/left base/straight-in areas, we are left with two hemispheres, bisected along a 018/198-degree meridian, dividing the TAA into basic east and west arrival areas. If you are approaching JEBIV from the north or south, you should do as the AIM says in 5-4-5 d.5(a) and look at your track to JEBIV to decide which hemisphere is appropriate. If looking at your arrival is part of your planning (It is, isn’t it?), and if a northerly or southerly approach to the area is anticipated, you would be wise to favor an eastern hemisphere arrival, as we’ll see.

The biggest challenge with this approach is the drop in the minimum altitude in the western hemisphere of the TAA, from 7600 to 2400 feet at 12 miles from JEBIV. That 2400-foot altitude puts you only 100 feet above the procedure turn and FAF-crossing altitude. This provides respite during the PT; however, a 5200-foot descent is nothing to sneeze at.

How Ya Gettin’ Down?
Despite the significance of this descent, the TAA design criteria does give us an out. Order 8260.45A, Paragraph 8.3 states: When terrain or operational constraints force high area altitudes that do not allow descent within gradient limits, the course reversal pattern at the IF(IAF) shall allow descent from the highest minimum sector altitude to the common IF(IAF) altitude.

The course reversal at JEBIV is a standard RNAV four-nautical-mile pattern, with the same outbound and inbound altitudes. So, that’s normal. Let’s analyze the descent gradients required when approaching from the west.

Say we’re at 9000 feet and cleared for the approach from the west with about a 120 degree course to JEBIV. The only option is to proceed direct to JEBIV and complete a course reversal, as there aren’t any “NoPT” routes. We’ll use a parallel entry to the course reversal. Within 30 miles of JEBIV we’ll descend to 7600 feet.

The fun begins 12 nm from JEVIV, as we are then permitted to descend another 5200 feet to 2400 feet. Remember, by no means is 2400 feet required by JEBIV, and I would actually suggest considering stretching out the descent in this case.

Using the course reversal for descent makes that more comfortable. Descending at 500 fpm, beginning 12 nm from JEBIV, we’ll lose 2400 feet and cross JEBIV at 5200 feet. Continuing the descent on the four nautical miles of the outbound leg of the course reversal will lose another 800 feet, putting us at 4400 feet.

We’ll continue the 500 fpm descent during the reversal turn. A 225-degree turn takes about a minute and a quarter, so we’ll lose about 600 feet more to roll out at about 3800 feet.

Straight In
To grab the LPV glideslope right at the minimum altitude of 2300 feet, we still need to lose another 1500 feet. That tailwind, though, is now a headwind. Even if the wind lost half its strength during our descent (further helping us), we’d still have 15 knots on the nose, making our groundspeed 105 knots or 1.75 miles per minute. In those four miles to JEBIV we’d lose a little over 1100 feet to put us over JEBIV about 2700 feet. Since the final segment starts at IVVEW, 6.8 miles away, we have plenty of time to descend that last 400 feet, slow and configure by the FAF.

Most aircraft descend at a steeper gradient when slowed with flaps than when clean. So, if a tight descent is of concern, slow to flap speed early and descend with the necessary flaps.

Also consider when to run your checklists. The approach briefing and initial planning should always be done early—even at cruise. Also, if you’re slowing to use flaps in the descent, you can get most everything done well in advance. Then, all there is to do is perhaps lower the gear and run your before-landing checklist just prior to glideslope intercept.

An interesting side note to this pops up with the opposite direction RNAV approach at KMLT. The RNAV 11 approach has the 7600-foot TAA altitude on the outer ring of the eastern TAA hemisphere. This is because Mount Katahdin actually is a bit east of PEENK, the IF/IAF at the center of the TAA. So, we only have to drop from 7600 down to 5900 feet at the 14 nm mark, and we don’t need to descend again until we’re inbound and stepping down towards the FAF.

Whenever you’re headed towards an unfamiliar destination, it pays to look at the approaches available and all of their peculiarities. “Oh good, it’s got an LPV,” isn’t very preparatory. Whenever you see something unusual, like perhaps a TAA that doesn’t match the standard profile, it’s time to dig a little deeper into why the differences are there and how you’re going to handle them. The time to start digging is not after your approach clearance has been received.

Evan Cushing had a long career at a regional airline, but is now a full-time educator. He thought he’d write about technically advanced aircraft, but got distracted reading the TPP.