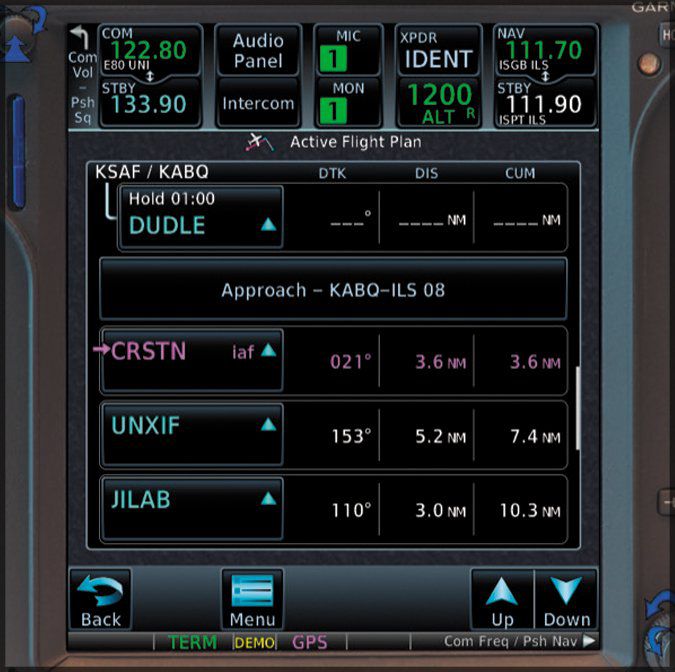 I fly behind a Garmin G1000 and found Frank Bowlin’s October article, “Multiple Approaches” to be of interest.

Although he wrote the article about the GTN navigators, I found that most of what he offered does work in a G1000. However, one statement left me confused.

“…I’ll just go to the flight plan and touch KABQ to select the approach.” Uh, what do you mean, “touch”?

Garmin does use similar operating logic across most of their products, so that a user accomplished with a G1000 can likely get the job done if suddenly behind a GTN and a G500. However, there are major differences that the accomplished user must recognize.“Touch” refers to the GTN series of navigators being touch-screen operated. So, in this case, “touch KABQ” might be thought of as selecting or clicking on KABQ.

I read with great interest the article “Staying Afloat” in the November issue. I earned my private pilot certificate four years ago; I’m female and in my fifties, instrument rated, with my own C182. I frequently fly from my busy airport at Dekalb-Peachtree, KPDK, in Atlanta to my island home on Amelia Island KFHB.

The tower at Peachtree is also a training tower, and with over 600 flights daily you can imagine the variety of traffic, from trainers to corporate jets. Of course, with all that traffic, pilot experience ranges from student to seasoned pro.

From the ATC voices I hear, I know who are the experienced, “Trust me I’ve got this” controllers, versus the newer ones who may have a few “ums” or have to correct a tail number readout a time or two.

I’ve taken a few tower tours to get to know the operations, and they have been incredibly insightful. I had an emergency once, en route with TRACON, and the controllers were outstanding in their helpful guidance. I’ve found that if you work as a team, helping each other, the system works at its best. Occasionally I’ve heard a pilot berating someone in the tower, i.e. “You turned me into the parallel very close to that guy on base!” and it sets everyone on edge. A better way to handle that example would be for the pilot to simply say, “I’m a bit too close to that guy on final and I’m going to space it out a little more.”

The solution is to help each other get better at our jobs, enhance safety, and calmly communicate if something doesn’t seem right. Personally, I love the ATC folks in my home-base tower and TRACON.

Recently, a friend asked me for some suggestions on what she could do as a birthday gift for her father, who’s an aviation geek but not a pilot. I suggested a tower tour at KPDK, and told her I’d see if I could arrange it. The front-line manager was more than accommodating, and when I told him my friend and her father would be thrilled, he said “We’re air traffic controllers; we’re not happy until you’re happy.” Keep up the good work.

Be Nice to Your Passengers

I recently flew in the back of a BE-58. I was in one of the back two seats going out. On the return flight, I sat behind the copilot seat, facing backwards. I am used to the front-left seat, so this was an interesting experience for me.

It was a stormy night, especially coming back. The pilot was very good. I don’t think he realized that I was an IFR-rated pilot with 2400 hours. I probably should have put on a headset and sat up front, if nothing else, to work the radios.

It struck me that most pilots have no idea what the passengers in the back of a small single or twin are experiencing. I had no idea there would be so much yawing, tail wagging, and bouncing around in such a big plane. I was not phazed by it, but it was impressive.

Toward the end, I turned on my iPhone and watched the approach on ForeFlight. He did a good job, but it was like watching a really great movie when you know the outcome and all the camera, director, and editing tricks.

Nonetheless, it was an eye-opening ride even while the pilot did such a good job. I don’t think he had any idea what his passengers go through. Most passengers would be freaked out by all the yaw, tail wagging and the moderate turbulence.

It was certainly an awakening for me. Most of my flights are alone or with only my wife up front. I’ve heard the occasional passengers in the back complaining about getting bumped around, and now I believe it.

Your November Remarks “BasicMed’s Other Side” was interesting and provocative. One item that’s often overlooked, perhaps little known, is that a pilot flying under BasicMed certification cannot legally serve as a 91.109(c)(1) safety pilot, because BasicMed’s coverage applies only to pilots flying as PIC. The FARs are not specific and clear on this matter; thus, a Safety Specialist from the Birmingham (Alabama) FSDO provided this interpretation.

While true on a strict interpretation of the existing regs, even the FAA realizes that it’s silly to allow a PIC under BasicMed, but not allow someone in the right seat to watch for traffic without an actual FAA medical certificate.Until that gets changed, though, there is a work around that’s covered both in this month’s quiz (page 17) and the article, “BasicMed Status Report” (page 15). The workaround isn’t perfect and can bump up against some insurance requirements, but it’s better than, “No.”

In October’s IFR Clinic, “Driving All Night” you examine the KLNK ILS or LOC approach to Runway 18. It appears that the JUSAM IAF can’t be identified without at least DME or better yet, GPS. You certainly can’t use timing, although that and a little pilotage might get you close. Yet, neither GPS nor DME is listed as a requirement for the approach. What’s up?

Good question, Donn. The simple answer is that you do indeed require DME or GPS to identify JUSAM.To find out why there’s no note listing DME or GPS as a requirement for the approach we must more thoroughly examine the rest of the approach. You’ll notice that HUSKR is another IAF, and itcanbe identified with the minimum equipment, not requiring DME or GPS.