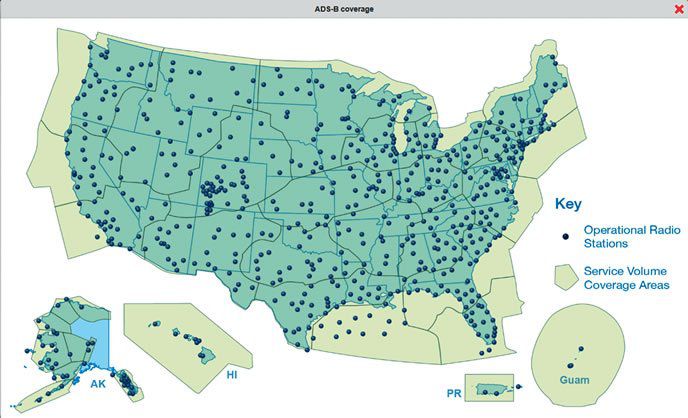 Yes, we’ve done a couple updates on ATC moderization recently. But the negative responses to editor Bowlin’s recent comments in favor of ADS-B suggest yet more information is needed. Plus, if you still think the 2020 deadline will get extended, well, the FAA is completing its tasks with an unfamiliar but refreshingly high speed and efficiency.

Since resident controller, Tarrance Kramer’s update in March 2014, the FAA has closed the mid-continent gap in ADS-B coverage by completing the installation of 663 ADS-B ground stations according to Exelis, the contractor. Under their contract, Exelis had to provide the same or better coverage than satellite with the stations installed. Full coverage now makes TIS-B traffic and FIS-B weather services available nationwide.

Tarrance said that the ADS-B transition for controllers was pretty seamless. Instead of seeing targets every six seconds, they now see them every second, making “catch-up” with fast-movers a thing of the past. The ADS-B six-antenna array allows seeing traffic 360-degrees around, searching for transponders in every direction. That data is paired with radar data in what’s called Fusion mode. Traffic updates occur by the second, from all directions. Both ADS-B and legacy transponders are painted.

Tarrance says that’s starting to change. Occasionally he turns it on and sees more and more ADS-B-equipped aircraft.

ADS-B is essential to every level of higher software that depends on knowing where aircraft are all the time, for separation, safety and flow control at a minimum. NextGen’s core computer system, En Route Automation or ERAM, and its core application, System-Wide Information Management or SWIM are useless without ADS-B.

The Beginning of the End

In another move toward NextGen, the FAA announced in the Federal Register on June 27, 2015 its intention to decommission over 700 NDB and VOR approaches, basing its decision on the fact that the number of procedures has nearly doubled in the past decade, and noting that some of those procedures are redundant or obsolete and all cost money to maintain. Read this important statement at: https://federalregister.gov/a/2014-14913.

The obvious question is whose ox gets gored. That is also answered in the Federal Register. I noticed immediately that the VOR 8R at my home airport in West Palm Beach, FL (F45) will be decommissioned. No loss. It is so dangerous that no matter how precisely it’s flown, you always wind up on approach for 8L, which is grass, or miss the airport altogether to the north. See https://federalregister.gov/a/2015-08098.

More positively, the FAA has now published 3404 LPV approaches, of which 2321 were to runways with no ILS capability. FAA policy calls for any new Category I precision approach to be an LPV. By FAA estimate, over 100,000 WAAS receivers have been sold. Nearly 80 percent have WAAS-LPV capability.

GA is taking advantage of ADS-B in two ways. First, the use of an ADS-B-In receiver such as a Stratus or Garmin GDL-39 feeding a tablet computer with a suitable app has become quite popular in the GA community. I had a recent experience where the G1000 NEXRAD link failed, which might have been precipitated by the moderately heavy weather since the link is satellite-based. However, the NEXRAD imagery from the ground stations on the iPad remained solid.

I attribute this to ground stations being less susceptible to weather than a satellite link. As if in confirmation, the G1000 NEXRAD woke up again once we were out of the worst weather. A little redundancy can mean a lot.

GA pilots who have not yet experienced the tremendous situational awareness that graphic ADS-B weather and traffic offer will feel like someone has taken their blinders off. This extra awareness is certainly adding to our safety of flight, a key NextGen objective.

The FAA says that as of December 2014, only 7,500+ GA aircraft had equipped with ADS-B Out. This is a pittance compared to the FAA estimate that more than 150,000 aircraft lack ADS-B Out less than five years from the magic date. There remains a great deal of resistance to ADS-B Out for various real (“prices will come down”) and imagined (“they’ll move the date back”) reasons.

Since equipage will be mandatory, it’s a matter of when, not if, for IFR pilots. While avionics shops are not overly busy now, there will be a giant crunch as procrastinators desperately try to equip before January 1, 2020. The ideal time would be to equip before that knee on the curve when installations start saturating shops and tightening equipment inventory begins limiting your options. My guess is two years prior. By then further waiting will offer no advantage, and the need to equip will become an itch needing a scratch.

The above completely neglects all the advantages one would have with a full ADS-B complement now. Equipping now would amortize the cost over a longer term and give you all the benefits of ADS-B sooner.

The FAA also set a new avionics TSO standard in 2014 for ADS-B-In capabilities such as an ADS-B Traffic Awareness System. Products with this low-cost traffic awareness capability will sound an audio alert to warn pilots that other aircraft are flying close to them.

The FAA published a TSO in October 2014 for battery-powered ADS-B Out transmitters for gliders and GA aircraft certificated without electrical systems. As many aircraft as possible must be ADS-B Out capable in order for the system to work best.

LPV approaches with comparable minimums are an improvement over ILS Cat I approaches since distortion of the GPS signal is impossible. (OK, distortion due to local causes is far less likely.) The FAA has been increasing the number of LPVs for years, with the objective of providing an LPV approach for some 2500 runways that are at least 3200-feet long (some exceptions) and meet other TERPS requirements.If obstacles intrude, an LP approach, the equivalent of a localizer approach but with much better lateral accuracy, is commissioned. LPVs and LP approaches require WAAS, but the FAA always publishes LNAV minima to serve non-WAAS aircraft.

ATC has taken to advertising RNAV approaches for all runways except those with an ILS, thanks to LPV minimums being much lower than other approach types. ATC is required to advertise the approach with the lowest minimums; increasingly that’s the LPVs.

Beyond approaches, we now have 133 Q-Routes (in Class A airspace) and 101 low-altitude T-Routes. And let’s note that the number of conventional and RNAV SIDs are near-equal at about 530 each. The same goes for STARs: 320 conventional and 355 RNAV. Optimal Profile Descents, a new philosophy for STARs, will permit smoother, more fuel-efficient descents with fewer level-offs.

All the above is what we pilots can see. What we don’t see is all the back-office stuff that helps us fly safely and efficiently. No discussion of NextGen 2015 would be complete without mentioning some of the upgrades and advances that have occurred inside the ATC “cloud” in the last year.

More than 120 of the FAA’s 230 ATC facilities can use ADS-B to separate traffic. ADS-B is now integrated into existing automation in 22 of 24 enroute ATC facilities. All ATC facilities will be using ADS-B along with legacy radar prior to the mandate taking effect.

A computer system named “En Route Automation” (ERAM), is the heart of NextGen. ERAM permits more flexible routing around traffic congestion, weather and other constrictions. Operating in real-time, reduced vectoring and increased traffic coverage will lead to smoother, faster and more cost-efficient flights. Part of ERAM’s power stems from being able to track 1900 aircraft at once, as opposed to the 40-year-old HOST system’s limit of 1100.

For the first time, ERAM will permit coverage beyond facility boundaries because it will process data from up to 64 sensors instead of HOST’s 24-radar limit, making more accurate tracking possible. Greater coverage means controllers can more efficiently transition traffic from one sector to another. Further benefits include automating conflict alerts, minimum safe altitude warnings and recording air traffic events. Importantly, routine maintenance will not interrupt ATC services, eliminating planned outages.

All 20 ERAM sites achieved initial operating capability in 2014 and 11 have declared Operational Readiness Dates, which means full commissioning of ERAM into the National Airspace System. Centers, TRACONs and towers all use ERAM, eliminating the disparate computer systems for each facility. EARM also provides hooks into the FAA Command Center, FSS, DHS, DoD and Customs and Border Protection.

NVS is a modern telephone and radio system that eliminates geographic limitations. For instance, with NVS a controller in one Center will be able to talk to an aircraft in another Center. NVS allows quick reassignment of ATC workload from one facility to another, a process that today takes days of physical rewiring. Had ADS-B and NVS been in place when the fire occurred in Chicago Center, that center’s tasks could have been redistributed in hours, not weeks.

NVS will foster better communication with UAS operators on the ground wherever they are. This has been a chronic problem that has caused potentially serious conflicts with other UASes, high-altitude balloons and aircraft.

On a larger scale, the FAA Telecommunications Infrastructure (FTI) replaced the FAA’s old telecom system in 2008, partly because the old system couldn’t meet NextGen’s bandwidth needs. FTI is the physical component of NextGen, providing consolidated telecom services for a staggering 5000 facilities and 30,000 circuits in the NAS. FTI is high-bandwidth, and meets Federal standards for information security including encryption. FTI and the Internet never touch.

The FAA characterizes System-Wide Information Management (SWIM) as providing “The Right Information, Right Now.” SWIM is a single point of information access to users of the NAS. A principal goal of SWIM is to assure that the FAA, airlines, airports and ATC service companies like Lockheed Martin see the exact same information so that sound collaborative decisions, say for flow control, can be made. It will also distribute weather (METAR/SPECI), NOTAMs, and aircraft tracking in ICAO format in an effort to prevent losing track of an aircraft as happened with Malaysia Airlines Flight 370.

SWIM has a GA component in that TRACON controllers can detect building congestion and anticipate things like runway changes due to weather. SWIM is implemented at the busy NorCal and SoCal TRACONs. Parts of SWIM have been working since 2010, but installations will continue through late 2020. Once equipped, TRACONs and potentially aircraft operators will be able to see what’s happening on the airport surface as if they were in the tower. For airline operators, this visibility will allow them to improve their surface operations.

ADS-B and NextGen are coming, whether we like it or not. The FAA is progressing at an unfamiliar quickened pace. We here at IFR think that’s a good thing and hope you do, too.

Fred Simonds, an active CFII in Florida, is an unabashed fan of ADS-B and everything aviation high-tech. He expresses his special thanks to Tarrance Kramer, who reviewed this article and offered several constructive changes. See Fred’s web page at www.fredonflying.com.