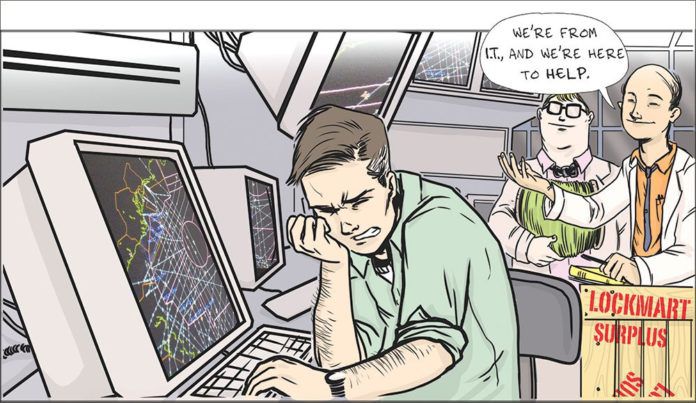 The FAA’s track record on revamping air traffic control is not exactly stellar. Now some of the lessons learned are being ignored. Will we ever learn?
For an industry where speed is measured in hundreds of knots, changes in technology do not arrive quickly or easily to aviation.

The FAA has a bold plan to upgrade air traffic technology with what it calls “NextGen.” It promises, amongst many things, better fuel and time efficiency through direct routing, more weather and traffic information, more precise tracking for controllers, a means for aircraft to separate each other, and even reducing aviation’s environmental impact.

Noble ideas are one thing. Executing them is another. This isn’t as simple as upgrading from last year’s iPhone.

Our Gracious Host
Spread throughout the USA’s 20 Air Route Traffic Control Centers (ARTCCs) is a 1980s-era network of 20 Host mainframe computers. Host supports the National Airspace System but does not provide separation and sequencing. Human controllers handle those tasks. Each computer’s primary role is enabling radar tracking of aircraft and communicating flight plan information.
When you create an IFR flight plan, your ARTCC’s Host processes it, assigns you a squawk code, and passes your flight plan to your departure Tower and any overlying Approach control.

On your departure, Host kicks your flight plan down to other facilities along your route. When a Center controller working you hands you off to another facility, that facility’s Host computer talking to the sending facility’s computer makes it possible. If you request a different cruising altitude, a reroute, or another flight plan change, controllers manually input them. Host passes them down the line.

There’s a lot more to it than just chatty computers. The point is that without these computerized engines, the National Airspace System doesn’t work.
Ferris Bueller’s Day Off was fresh out of theatres when Host was originally installed. The system has seen incremental upgrades, with the last major one (Rehost) in 1999. However, like a 1973 Cessna Skyhawk, spare parts and maintenance can keep the old bird going, but no simple upgrade can make it fly faster or carry more load. According to the FAA, Host has hit its limit for the number of aircraft it can handle and its compatibility with future technologies.

The Future: Take One
Attempts at a Host successor began in the mid-’80s—when Host was still new—with the Advanced Automation System. This revolutionary effort sought to completely rebuild the entire air traffic system. The FAA went all-in with computer juggernaut IBM to create new software, radar processing and scopes.

It wasn’t just the technology the FAA wanted to replace. In the wake of the 1981 air traffic controllers’ strike—and sudden dearth of controllers when Reagan fired them all—AAS was partially intended to replace human controllers with computerized decision making. Its AERA component (Automated En Route Air Traffic Control) would constantly monitor flights to detect and, most importantly, resolve potential conflicts.

AAS started a year behind schedule and continued devolving as both partners tried to force unstable software and underpowered hardware out the door. Code was being written by programmers with little understanding of air traffic. Controllers were not included in the development process.

The greatest problem was the FAA’s constantly changing requirements. It’s common sense that one shouldn’t decide to change the number of doors and windows in a house after the walls have been built. That didn’t stop the FAA from doing just that—up to 500 times in a single year for a single component.

For example, one aim of AAS was the ultimate consolidation of hundreds of Approach controls into those 20 ARTCCs. This move required an advanced radar processing system that could accomplish very different styles of radar control at those two levels. Somewhere along the way, the FAA dropped the consolidation notion and the dual-use requirement for the software developers, yet still required it for the engineers building the physical scopes.
By the time the program was canned in 1994, $2.5 billion was spent. Some of the technology was cannibalized and incorporated into updates for ARTCC radar scopes. The rest—over $1 billion worth—was just written off.

The whole thing was so catastrophic that chapters have been dedicated to it in books with subtitles like “Monumental Software Disasters.” To this day, AAS stands as a shining example to software engineers of how not to run an ambitious project.

Kick to the AAS
After AAS’s expensive, floundering death, the FAA regrouped and learned from at least some of its mistakes. Future attempts at ATC upgrades would be evolutionary as opposed to revolutionary.

Free Flight, as the new agency directive would come to be called, was initiated in 1996. There are two key aspects to it. First, break air traffic away from the traditional victor- and jet-route airway system and allow aircraft to fly more direct routes. It would also do away with traditional ground-based radar and navaids in favor of satellite tracking and navigation. Both would allow the benefits mentioned in the first section of this piece. NextGen is the technology in development to execute it, and it’s built around ADS-B.

ADS-B Out broadcasts the aircraft’s location to ATC and other surrounding aircraft. ADS-B In allows the aircraft to see traffic in its vicinity and—when the services become available—view terrain, weather, and relevant flight information such as NOTAMs. It is expected to become the global standard for ATC.

The FAA is requiring that all aircraft desiring to fly in Class A, B, C and certain Class E airspace be fitted with at least an ADS-B Out-capable transponder by 2020. It is also halfway through installing a network of supporting ground stations throughout the United States.

Like AAS, the Free Flight concept aims to remove some responsibility for aircraft separation from controllers and place it on technology. Contrary to AERA, where a ground-based computer made the big decisions, aircraft will potentially separate themselves from surrounding traffic.

This process has been a slow haul. According to a 1996 Wired magazine article, by 2010 pilots would be separating each other and making their own route changes without ATC involvement. Right. Just go ahead and try making a self-initiated route adjustment without ATC involvement—and get ready to copy down a phone number, or worse. TCAS and TIS are last-ditch situational-awareness tools, not en route separation systems.

Nonetheless, many of the incremental components of Free Flight were already in place as of the late ’90s and early ’00s. Modern flow control throttles traffic to busy airports. Every ARTCC now has User Request Evaluation Tool (URET), which allows quick route amendments at the scope and alerts controllers of potential traffic conflicts.

Unfortunately, there’s one cornerstone project that has fallen behind in its promise.

Rats in the Maze
Ever wanted to be a guinea pig? If you’ve flown through the airspace controlled by Seattle and Salt Lake Centers since 2009, you may already have been one. Both facilities are the FAA’s testing ground for the latest effort to replace Host: Lockheed Martin’s En Route Automation Modernization system, or ERAM.

ERAM is NextGen’s brain and backbone. As of late 2011, it’s also behind schedule, $330 million over budget, and significantly flawed. As DOT Inspector General Calvin Scovel testified before Congress in April 2010, ERAM’s issues “include radar processor failures, problems in handing off traffic between controllers, and critical flight information being paired to the wrong aircraft.”

Not much had changed by October 2011 when he again testified, “Testing at initial sites revealed significant software problems with the system’s core capabilities for safely managing and separating aircraft. These problems include errors that display flight data to the wrong aircraft and hand-off problems between controllers at other facilities.”

Tracking, handing off, and identifying aircraft are basic ATC functions. And ERAM cannot perform them reliably. Yet the FAA has been testing ERAM on live traffic for nearly three years.

Controllers have been directed by the FAA to rely on this unproven technology to keep their traffic flowing. The blogger at ATCFreqs.com put it best: “If a controller is distracted by his defective equipment and he fails to keep airplanes apart, it’s his fault; not the fault of the faulty equipment. The FAA tells controllers of known bugs and problems and simply says, work around them and don’t get distracted by them. That’s because it’s a lot easier (and cheaper) than actually fixing the problem.”

Now I understand that technology fails. Like pilots, we controllers work aware that our gear can quit on us at any time. Last year our Tower suffered a lightning strike that blew a hole above our radio racks. As the rain poured in, our local, ground, and ATIS transmitters shorted out one by one. For most of the day we worked traffic with just our clearance delivery freq and a portable transmitter. But ERAM is different. It’s a known problem, like taking off in an airplane whose engine ran poorly during runup.

Seattle and Salt Lake are lower traffic areas. Serious doubts have arisen about ERAM’s abilities to handle far more complex airspace like New York and Atlanta. Both an Independent Operational Assessment and NATCA, the air traffic controllers’ union, have adamantly recommended the FAA fall back to Host until ERAM’s issues are fixed. Lockheed is squashing bugs, but for every one corrected another rears its head.

In spite of growing national concern, five more ARTCCs are receiving the latest ERAM software builds. The hardware has already been installed in all 20.
Speaking as a controller, I want pilots to trust my judgment. As a pilot, I want to know the judgment of any controller working me is supported by accurate, reliable equipment. I also know that a distracted controller who is dealing with equipment failure is far more prone to making a critical mistake.

Has the system improved? Certainly. Earlier builds of ERAM couldn’t run 24 hours without crashing. However, there have been reports of serious failures—most recently in November 2011—that have sent controllers scrambling for backup equipment. Inspector General Scovel put it best: “NextGen has a log jam,” he testified, “and ERAM is the key log.”

Meanwhile, a country of pilots and controllers await the future of their system, their wallets and their safety. Cynicism is easily justified given the FAA track record. Sixteen years after AAS, the FAA is again forcing premature tech out into the field. It is hesitant to listen to the concerned workforce who must live with this technology. While many of NextGen’s pieces have fallen into place, will the remainder come in on time and budget? History and the current state of things argue otherwise.

Tarrance Kramer is a pilot and controller. He’s not sure which side of the scope he’d rather (not) be on come 2020.