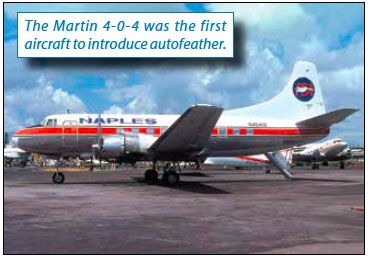 Okay, what is engine-out automation? It includes automatic propeller feathering and rudder boost. New innovations are being introduced that extend this automation into more twin-engine aircraft (see sidebar Latest Trends). While engine-out automation is usually provided only as an aid, the automation may be required to meet the aircraft certification requirements. As with other cockpit automation, it is a large benefit in most cases. However, in certain circumstances, the automation might add to the surprise factor and cause confusion. Let’s dig into the background of these systems and their potential benefits, then explore a case when it could add confusion.

Aircraft propellers that could be feathered in flight go back to the 1930s. Hamilton Standard and Curtis Wright both produced full-feathering propellers. Hamilton Standard’s “Hydromatic” was as the name implies a hydraulically activated system. Electric motors drove Curtis Wright’s feathering system. While the flight crew could feather the propeller from the cockpit, it was not until the early 1950s that manufacturers incorporated systems that automatically feathered the propeller with an engine failure. This feature was first introduced on the Martin 4-0-4.

Automatic feathering helps the aircraft manufacturer establish a low minimum control airspeed. The minimum control airspeed, airborne (VMCA) must be established with a windmilling propeller (think high drag) unless an autofeathering propeller is standard and operational. The feathered propeller is worth several knots lower VMCA. From FAA Advisory Circular 23-8C: “VMC is normally measured with propeller windmilling unless the propeller is automatically feathered or otherwise driven to a minimum drag position … without requiring pilot action.”

For the rudder boost, FAA aircraft certification requirements stipulate that in establishing the VMC, no more than 150 pounds of rudder force can be required before tr imming. With high horsepower engines placed further out on the wing, the 150-pound limit was exceeded in certain aircraft. Rather than writing a regulation that only NFL linebackers could fly these aircraft, a rudder boost system was developed to assist the pilot. For example, if 180 pounds were required to fully deflect the rudder during Vmc flight testing, a servo would be added to automatically add force (say 35 pounds) to the rudder cable to bring down the pilot’s effort to under 150 lbs. One of the first rudder boost applications was on the B-50 bomber.

There are many designs for constantspeed feathering propellers. There are single acting designs where the piston is driven by high-pressure engine oil from only one side of the piston. A spring provides force in the opposite direction. There are double acting designs where high pressure oil drives the piston both forward and aft to change the propeller pitch. The propeller governor produces and controls the high-pressure engine oil.

Autofeathering is quick but not instantaneous. It takes time for the oil to be forced back into the reservoir. McCauley states this can take from 3 to 10 seconds. While it is feathering, you have a high-drag windmilling propeller.

As a safeguard, the autofeathering system uses both the power lever position and the actual power (torque) developed to determine if the propeller should be feathered. In other words, just low power will not result in the prop automatically feathering. How is the power lever position determined? Either angle position sensors (resolvers) or microswitch pickoffs are built into the throttle quadrant. A torque sensor can be used to detect when the airstream starts to drive the propeller rather than the engine. Alternately using an engine setting that approximates that point can be used. There are also interlocks to prevent autofeathering both left and right sides.

Rudder boost can also be done in different ways. On just the Beech King Air series, there have been three different implementations of rudder boost. Interestingly, the rudder boost was not required to satisfy the regulatory requirements except on the 300 series. The rudder boost looks at the difference in torque (or an approximation of torque) between the two engines. When a differential threshold is reached, the rudder is deflected. In some systems, the amount of rudder deflection is proportional to the torque differential between the two engines. In others, it is all or nothing.

What started the “investigation” for this article was two relatively recent King Air Accidents. The King Airs involved had both autofeathering and rudder boost capability. The NTSB’s reports stated that the pilots applied the wrong rudder in the engine-out situation. My interest was piqued when I discovered that they were both experienced pilots with ATP ratings. Both made a basic but tragic mistake of applying the wrong rudder to counter the asymmetric thrust. The first accident was in Wichita, KS, on October 30, 2014. The NTSB Docket is CEN15FA034. The pilot had over 3000 hours total and over 2800 hours in multi-engine airplanes. This King Air 200 accident occurred on takeoff in good weather.

The second accident was at Addison, TX, on June 30, 2019. The NTSB Docket is CEN19MA190. This pilot had over 16,000 hours of multi-engine time. This King Air 350 accident occurred on takeoff with 10 miles visibility and scattered clouds at 1,400 feet. The NTSB’s systems group factual report states: “There was no evidence of a malfunction in either engine or the propeller control systems thus it is probable that migration of a power lever(s) occurred due to insufficient friction being set on the power lever friction control…. With his level of experience the pilot should have controlled the resultant asymmetric thrust.… The transition from visual to instrument flight in the low visibility conditions existing at the time of departure was considered to be a major contributory factor in this accident. ”

It is easy to say that pushing on the wrong rudder pedal is a dumb mistake and “I would never make that mistake.” While it’s true that they did not follow “The Drill” (See Sidebar.), simulator training centers report that this is a common mistake. Also, in the Addison accident, if they pushed both power levers up, it would have likely prevented their deaths. But, might there have been something else at play? The following discussion is not a definitive conclusion, but rather is speculation and “food for thought.”

Somatogravic Illusions have been implicated in many accidents, including the recent Atlas Air 767 crash in Houston. This accident is especially tragic because the First Officer who was flying let his inner ear control him. He made the most basic mistake of instrument flying—ignoring the instruments. The NTSB report on the accident has a good description of this inner ear/brain phenomena. There have been other similar accidents in the past, but usually not to 5000-hour ATP-rated pilots flying in Part 121 service.

In short, acceleration makes the body think the aircraft is moving when it is not or fakes the body into thinking it is stable when it is not. However, the subliminal effects only occur when the pilot is ignoring the instruments and the horizon is not visible, i.e., IMC. Would this also be true of a nose-high attitude on takeoff where you need to use the instruments or the side window to orient yourself to the horizon?

So far so good. Now what happens when automation is added? If the “failed” engine was due to throttle or power lever creep instead of a sudden failure, then you might not notice the slow yaw rate as the throttle/power lever creeps back on one side. Even if it was an actual engine failure, some turbine engines will wind down slowly without inducing a sharp change in yaw. To eliminate throttle/power lever creep, you should block the levers (palm behind the levers) on takeoff. If you do not and one lever creeps back far enough to trigger the rudder boost logic you can get a wakeup call. However, in that situation, the instantaneous yaw you feel is from the rudder boost. The yaw sensation from the rudder boost is opposite what an engine failure would induce.

The same is true for autofeathering, but only if it is an actual failure. The drag reduction sensation will be yaw in the opposite direction as what the engine failure induces. A windmilling prop causes a lot of drag but when the prop feathers much of that drag goes away and the momentary (instantaneous) sensation is yaw toward the good engine. However, the autofeathering system uses both the power lever position and the actual power developed to determine if the propeller should be feathered. If the Addison accident had been initiated by power lever creep, then the autofeather would not be activated. Evidence showed it was not feathered. If he had an actual engine failure and pushed both power levers forward, as mandated by “The Drill” then the autofeathering mechanism would have been activated.

The somatogravic or somatogyral illusion could apply to the second accident more than the first. At Wichita there was 10 miles visibility and few clouds at 15,000 feet. The only thing that could indicate that the illusion was a factor is if the deck angle blocked the forward view of the horizon and stress induced tunnel vision restricted his peripheral vision. In the second accident, the aircraft was close to entering IMC.

Always do the Drill. Pitch (usually down), all levers forward, flaps and gear then identify, verify and feather. The startle factor might make you jump to conclusions, but you must use all available sources of information to “identify,” not just the seat of your pants. Double check your rudder input. Left engine problem? No left rudder.

THE DRILL AND VMC & LATEST TRENDS

THE DRILL AND VMC

There are excellent YouTube videos on “Multi-Engine Training — Part 1 – The Drill and Part 2 – VMC (Minimum Control Speed)” by Martin Pauly and Doug Rozendaal. These videos are not just for the multi-engine student; they are useful for any multi-engine pilot. Tom Clements’ “Power Loss Versus Engine Failure” article for the King Air Magazine was incorporated into the NTSB Docket on the Addison accident. In that article Tom said, “Take time to view it [Martin Pauly’s video]. It will be time very well spent”. Tom has also said that “For every true engine failure in the PT-6 powered world, I believe there have been at least 10 times as many power rollbacks. Heck maybe it’s 100 times as many.” Tom points out that Power Lever Migration is the cause of many of these power loss situations.

Control of twin-engine aircraft with an engine failure has received attention of avionics manufactures. Within the past year, both Garmin and Innovative Solutions and Support have introduced automatic systems to aid the pilot with engine-out operations. Garmin’s system “Smart Rudder Bias” is a rudder boost type system using the autopilot yaw servo. It is aimed primarily at piston twins. IS&S system is part of their “Auto Sense” feature of their autothrottle on King Airs. “Auto Sense” will, if required, reduce the thrust on the good engine side to help prevent VMC rollovers.