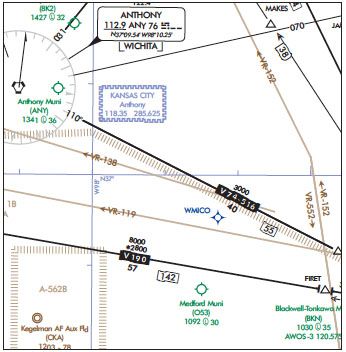 After a three-day trip to the Denver area mixing business and recreation, you’re heading eastbound for home with a stop in Medford, Oklahoma, to visit a friend. Medford Muni (Oscar-53) doesn’t seem to have much to it, though, so you review the logistics to confirm it’ll work for an overnight. One runway at 3007 feet? No problem. Plenty long for your personal aircraft in mild spring weather. One RNAV approach for each end? No problem. Flying in from the west? Of course the direction you’re coming from shouldn’t matter. But both IAPs are laid out with initial fixes on the east side of Medford and you’re coming from the other side. So you’ll need to plan out any potential maneuvering required to fly the full procedure, just in case…

Mostly, though, it’s a straightforward flight. Routing in the second half picks up V74 to get in the vicinity of Medford and remain outside of the military operations area as long as possible. Approaches to Medford’s Runway 17/35 consist of one LNAV procedure per side, each with a single base-to-final leg from the east. The plan views, when compared, are nearly mirror images, both with a missed approach/hold at FIRET. The approaches even have the same minimums: LNAV MDA is 1680 and circling is 1740. Plan on Runway 17 for southerly winds in the forecast.

The approach starts at LIBEY. How would you get onto the intermediate leg from the northwest? There are no course reversals; the profile view says “Procedure Turn NA.” No problem; just get cleared to leave the airway well west of Medford and get situated to the northwest of the destination. Then get cleared direct to the IF, INACE, for a straight-in from there. According to the Instrument Procedures Handbook, that’s with vectors from ATC as long as the intercept to final is 90 degrees or less via vectoring or a cleared-direct-to.

That all looks okay, so off you go to the airport, looking forward to flying a 400-mile base leg into Medford. Your ETA is 7 p.m. local, when your friend arrives for a ride into town. But when you get to your aircraft for a preflight inspection, there’s a problem—dead battery. Good news is, you can get a recharge. But between finding the proper power source and a couple of tools to access the never used aircraft plug-in, the engine startup happens well after 6 p.m. Medford time, and you have just over two hours en route. Arriving after dark won’t bother you much; there’s an easy RNAV approach, a runway PAPI and 1000-foot ceilings in good visibility. So you press on.

But as you start the descent from 7000 feet, ATC tells you the radar just went down. Expect a fix-to-fix approach to Medford, with position reports, starting with your heading direct FIRET. That’s the transitional/holding fix for both approaches at Medford. Another aircraft’s inbound, so taking you past buys everyone some time and spacing. No big deal, fly past the airport to FIRET, which has a transitional leg published for the RNAV 17. It’s a 318-degree course to LIBEY. But wait. From your en-route heading southeast bound, there’s a sharp course change at FIRET to pick up that leg. 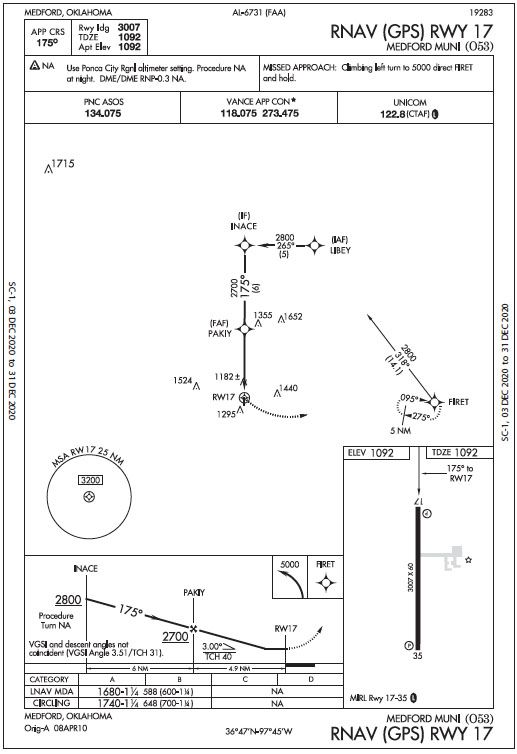 You decide to fly the published holding pattern there to sort this out. In any case, the hold also would be a good time to descend to 3200 feet, the Minimum Sector Altitude for the area and a good altitude from which to commence the next leg. You make sure to get cleared for the hold and desired altitude ahead of time. It’s a direct entry to the right turn in the hold, so that part’s simple enough. With stiff south winds and a holding course of 095 degrees, you decide the best way would be to turn north from the outbound holding leg (course 275 degrees and a heading of 265) and intercept the transitional segment with a comfortable angle of about 45 degrees. Meanwhile, Approach gives you a heads-up that it’ll be a couple of minutes to hear back from the other aircraft, which needs to cancel IFR in order for you to continue inbound. And if they go missed, the published instructions would have them climbing to 5000 feet towards FIRET. By then, you’d be cleared to LIBEY. Fuel check: Two hours remaining is plenty of time.

Actually, there isn’t plenty of time. Here you are holding at FIRET and from what’s discernible between cloud layers, it’s getting dark. The approach chart says: “Procedure NA at night.” What time is that? Sunset? That’s probably around now, close to 8 p.m. You think there’s time; after all, the regs in §1.1 say “Night” is “the time between the end of evening civil twilight and the beginning of morning civil twilight, as published in the Air Almanac, converted to local time.” You’ve yet to order one from the U.S. Government Bookstore and can’t just look it up from 3200 feet, so use your scout training. It’s roughly 30-60 minutes after sunset for civil twilight in most U.S. cities, so for now just deal with the fact that you need to land here pretty much now, or go further east to an alternate. And turn on the nav lights; that you know is a sunset reg.

In hindsight, you should have checked this stuff before flying. There are lots of web sites to find sunrise/sunset by city and even some apps to use on the go. Airnav.com lists sunrise, sunset and civil twilight by airport; to search by town, I used the Farmer’s Almanac. On March 29, Medford’s sunset was 7:51 p.m. local; the end of civil twilight, 8:17 p.m.

Civil twilight is defined as the time when the sun disk’s center is six degrees below the horizon. For most of the U.S., looking at several examples, twilight timing varies mostly in the 30-60-minute range. So at Medford, the IAPs are off limits after 8:17 p.m. Why? Obstacles. See the IPH, Page 4-39: “If there is penetration of the 20:1 surface, the published visibility can be no lower than 1 SM with a note prohibiting approaches to the affected runway at night (both straight- in and circling).” For every 2000 feet from the runway, obstacles of 100 feet will penetrate. The most relevant obstacles appear on the plan view of the chart; here, find three near the final approach course ranging from 1200 to nearly 1700 feet elevation.

All this doesn’t necessarily prevent you from reaching a place like Oscar-53 at night if it can be done visually. Staying IFR and getting a visual approach would be the best option, requiring conditions of at least 3 SM, ceiling at least 1000 feet, having the field in sight, and flying clear of clouds. But under the current conditions at O53 (elevation 1092), you’d have to fly most of the approach anyway until breaking out at some point after PAKIY, the final approach fix. What’s the minimum ceiling you want to consider a visual approach, then, assuming visibility is fine? In round numbers, probably 2000 feet, allowing you to fly just below that at about 3000 feet indicated; this puts you a bit above the starting approach altitude of 2800 feet and just below the MSA 3200 feet, which assures 1000 feet of obstacle clearance over a 25-mile radius from the runway.

Can ATC give you vectors for a visual, assuming radar’s operating? According to the IPH, yes, if the ceiling at the airport is 500 feet above the Minimum Vectoring or Minimum IFR Altitude. Using an MVA overlay on a digital chart, it’s 3100 feet MSL at Medford, confirming a 2000-foot ceiling mini‑ SC-1, 03 DEC 2020 to 31 DEC 2020 SC-1, 03 DEC 2020 to 31 DEC 2020 mum for this procedure. The handbook goes on to state that when there’s no weather report at said airport, “there must be reasonable assurance through area weather reports and PIREPs that descent and approach to the airport can be made visually, and the pilot must be informed that weather information is not available.” Medford’s weather reporting source is 31 NM to the east at Ponca City’s ASOS; there’s also the Blackwell-Tonkawa Muni AWOS, 19 NM to the east. With no other information, it’s a judgement call as to the “reasonable assurance.”

For this evening, with the weather at a barely-marginal VFR and the dark conditions, you decide to fly the approach as soon as the preceding traffic reports down, which fortunately it does. By all your best estimates, you’re just barely going to get in legally after the approach. But, you certainly don’t expect another go at it if you miss; the procedure becomes NA in just a few minutes. So, you’d just head to Ponca City. It has services and RNAV approaches are permitted at night, so long as the ASOS is working. It’ll be about 10 hours until the end of morning civil twilight (6:53 a.m. local) to make the initial fix and head on in. Better late than illegal, or unsafe.