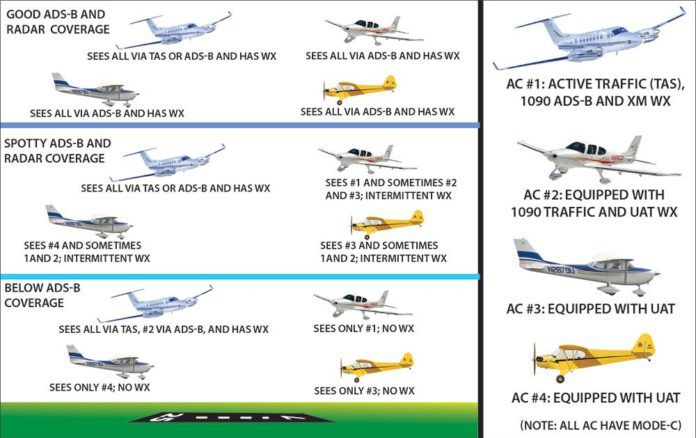 Like an oil tanker approaching a field of icebergs, GA owners are plotting a course into the ADS-B world of tomorrow. Here’s an update and our two cents.

Recently an FAA-sponsored committee recommended the FAA not require equipage for ADS-B In, saying there’s no good business case. Is this great, money-saving news for you?

Sort of, or maybe not. You still have a commitment to equip for ADS-B Out by Jan. 1, 2020. That’s going to set you back a minimum of about $3000, no matter who you are. The question is: What’s the benefit for spending a bit more and getting some of the ADS-B In goodies, and which goodies can I get? The plus of the committee finding not to mandate equipage is that your options here are a bit more open.

A Quick Review
From the point of view of anyone other than airliners and serious biz jets, ADS-B is really three components: ADS-B Out, ADS-B In for traffic (which we’ll just call ADS-B Traffic) and ADS-B In weather (ADS-B Weather). The only part that will be mandatory by 2020 as it stands right now is ADS-B Out. That’s the part of the system that takes your GPS position and an ID unique to your aircraft and broadcasts it to ATC. Think of ADS-B Out as the NextGen version of a transponder.

Not that you can get rid of your current transponder after 2020. The Mode-C system we know and love will remain as a backup. So you’ll essentially have two transponders.

ATC gets a perfect picture of the locations and vectors of all ADS-B aircraft through ADS-B Out. You can get your own copy of this traffic picture if you have the optional ADS-B In for traffic. To do that, you need both a receiver and a display to put for that traffic information. The display could be anything from an MFD or moving-map GPS to an iPhone.

You also need to have ADS-B Out, because the way ADS-B Traffic works is that the ground stations receive your ADS-B Out signal and builds a custom data packet showing the traffic around your specific aircraft. If you have ADS-B In, you can also receive ADS-B Traffic directly from other aircraft if they are on your same frequency (more on that in a minute). Your ADS-B receiver then creates a complete picture without your own aircraft or any duplicates.
ADS-B Weather is simpler. The FAA broadcasts it and anyone can receive it, provided they are on the right frequency. There’s that frequency thing again, so we’d better add that part of the equation.

The problem with 1090 MHz is its bandwidth is limited (for several reasons) so it can’t broadcast the weather. So weather is only broadcast on 978 MHz. If you want ADS-B Weather, you need a 978 MHz receiver. These are usually combined with a transmitter to create a Universal Access Transceiver (UAT).

Further complicating the picture is that for 1090 MHz and 978 MHz aircraft to see each other, they have to be within reception range of a ground station. No problem up high. But down in the traffic pattern—you know, where you might encounter, say, another airplane—they are blind to each other. To get a better idea of who can see who and where, see the graphic on page below.

Picking Hardware
So how does this all figure into picking hardware? It’s really a bit of a decision-making tree. The first split is whether you care about ADS-B traffic and weather at all. If you don’t, the cheap-and-easy solution is an ADS-B transponder. For $2500-$5000, you can get Mode-S transponders that also do ADS-B on 1090 MHz and cover you for the Mode C requirement all in one box. The catch is that they must have a WAAS GPS position source—which could be a certified GPS already in your panel—connected to do ADS-B.

We don’t have space to lay out all the options here, but you can find them in the November 2011 issue of our sister publication Aviation Consumer. Note to the wise: don’t forget that a slide-in replacement ADS-B transponder will still need a GPS position source. Adding that cable could nullify any savings of using the old transponder rack.

For those who fly under 18,000 and want to spend a bit more to also get ADS-B In, you may want to go on 978. The benefit here is that the 978-MHz UATs are one box giving you both ADS-B Out and ADS-B In (Traffic and Weather). You’ll still have to keep a working transponder in addition to the UAT. You’ll also need a display, but at least one company, FreeFlight systems, will offer a WiFi option to send the data to an iPad or Android device. So that’s a cheap(er) way to go.

We’ve seen UAT hardware costs anywhere from $9995 to a promise of under $3000. But we’re wary of those low-ball systems. FreeFlight has its act together and promises a UAT for under $5000 if you have a WAAS GPS to connect ($7000 if not).

The UAT gives you weather if you’re within reception range. This means you’re unlikely to get it on the ground, but you’ll have subscription-free weather above 2000 feet for much of the U.S. The downside of going UAT is that when you get below ADS-B reception range, you won’t see any traffic except other UAT-equipped aircraft. That King Air on approach while you’re on the downwind won’t paint on your display. Better hope he uses the old-fashion radio.

The decision tree for those broadcasting on 1090 is even more complex. There are terrific ADS-B Traffic solutions that combine active traffic with ADS-B traffic. These systems see all ADS-B targets up high and see 1090 MHz or transponder-equipped aircraft down low. Basically they see everybody. They also start at almost $10,000, not including the transponder upgrade to do ADS-B Out. So the complete package is more like $15,000. And that’s without weather.

Weather can be added for under $1000, however, if it’s displaying on an iPad or similar by getting a portable receiver that just listens on 978 MHz. Could you have a 1090 MHz ADS-B Out system and install a UAT to get traffic and weather in? Yes, you could, and that weather and traffic could play on a certified MFD. You would be blind to all aircraft below ADS-B coverage, however, because your broadcast will be answered by other 1090 aircraft on 1090 MHz but you’ll only be listening on 978 MHz. You could combine this with an existing active traffic system, but you would see double targets when you were in ADS-B reception range.

Reasons to Wait
As you can see, it’s not that simple a call today or down the road. It won’t matter which system you have in terms of ATC services. The real decision is what kind of traffic awareness you’d rather have down low and whether you want ADS-B Weather. What equipment you already have is a bit of a factor as well.

There is still time to wait and see how the market shakes out. New options will be coming online in the next couple years, but they are unlikely to change much of the situation. There are some rogue elements, too. For instance, Canada might require the 1090 solution. So if you fly across a border, 1090 for ADS-B Out at least is likely in your future.

Right now, STCs are required for many of the installations. This drives up cost. But there’s pressure to get AMLs and field approvals allowed for systems. That will make installation cheaper. So you can wait a bit while you make your plan. But don’t wait too long. By June of 2019 we expect the waiting list at just about every avionics shop in the country will stretch well past the pumpkin date of January 1, 2020.