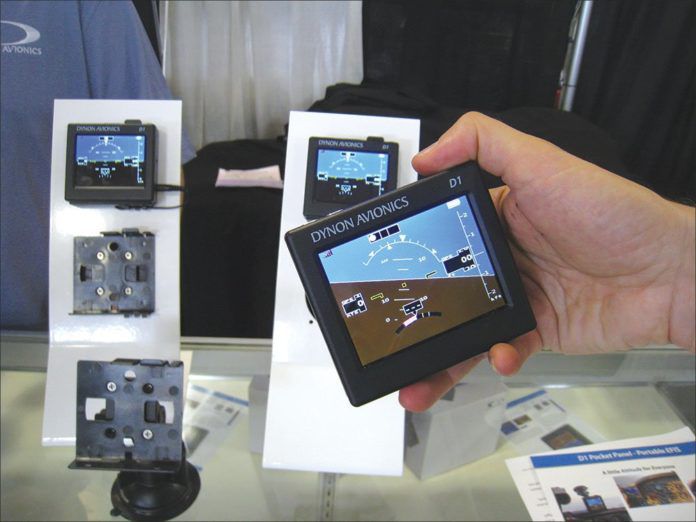 Every day avionics get smarter and smaller (and occasionally cheaper). This year’s Oshkosh revealed three devices that push that envelope and might save lives in IMC.

Even though glass panels dominate the pages of aviation magazines and seem almost required to get flight training students in the door of a flight school, there are plenty of pilots and aircraft trolling the skies with conventional instruments. Retrofitting electronic flight information systems (EFIS) often exceeds the hull value of the aircraft. Even adding a simple electronic attitude indicator ends up being over $5000 in investment.

This means there’s a ready market for some cheaper alternatives. People have tried —and, in my opinion, failed—to harness the basic accelerometers in iPhones and the like for backup flight displays. These systems simply aren’t up to the task. But walking the halls of Airventure at Oshkosh this year, I found two systems with real AHRS and GPS that could do the trick of keeping you upright and on course in the clouds even if everything else on the panel was dead.

I also found a system that wasn’t cheap, but contained both a backup EFIS and a function that might be a life saver if your trouble wasn’t a lack of flowing electrons, but a failure of the aircraft’s only engine to keep spinning the prop.
The best part is that at least the first two of these options are affordable for almost any cockpit.

Dynon’s Pocket Panel
If you’ve spent any time in the LSA or experimental aircraft market, you know Dynon Avionics. For the rest of you, Dynon is probably the biggest name in non-certified avionics, with systems whose features easily rival what you’d find in a tripped-out Garmin G1000. The D1 Pocket Panel isn’t feature rich at all—and that’s part of the point. It’s an all-in-one backup EFIS whose true power is in its simplicity.

The box is small (6.6 x 3.3 x 1.2 inches) and is mostly display. On that display is attitude, rate of turn, slip/skid, groundspeed, GPS altitude and groundtrack (in lieu of heading). All the mems (digital gyros) and accelerometers to make this work are contained inside the box. The GPS is also built in, but Dynon wisely put an option for an external antenna in case you mount the D1 such that the built-in GPS doesn’t have a clean view of the sky.

Ed Lansinger of Dynon told me it works fine if you just Velcro the unit to your panel, but the D1 comes with two mounting systems included. One is a RAM suction-cup mount and the other is a clip-in that fits into any empty 3 -1/8-inch instrument hole. The internal battery will run it for four hours after everything else on board goes dark.

There are few options. Obviously, you can dim the display for night use. But you can also reset the pitch angle so you don’t have to mount the unit exactly perpendicular to gravity. This is handy if it’s on a RAM mount or a sloped part of your panel. Lansinger told me it can even be turned on in the air and establish a good baseline, so long as you’re still in level flight.

I didn’t get to fly it, but the display seemed fluid, responsive and accurate on the ground. It will be reviewed in Aviation Consumer next month, so you can take a look there to see how it stands up to aircraft trials. But given Dynon’s history and how well their other products perform, I expect it will do everything they claim. The price tag is $1425—not shabby at all for a complete set of backup flight instruments.

Sagetech’s ADS-B with Vision
This has been the summer of portable ADS-B receivers. SkyRadar was the first to market a couple years ago, but the marketing engines of Sporty’s Pilot Shop and ForeFlight made the concept a hanger-hold name with their well-engineered Stratus receiver. Now Garmin, Dual and a couple others have swung back with their own units.

Sagetech made a debut appearance as a company with their own ADS-B receiver. The company has been building tiny avionics for 30-pound drone aircraft for over a decade, so it’s no surprise their box was the smallest we’ve seen so far. What was a surprise was the option to include a real AHRS in the same space.

There are four Clarity models, ranging from the basic Clarity Core for $699 (weather and some traffic) to the weather, traffic and AHRS Clarity Dual SV for $1117. The SV stands for “synthetic vision” because the Clarity connects via WiFi with an iPad running WingX Pro. WingX Pro is one of the better iPad apps for charts and in-flight weather, but it also does synthetic vision. Clarity has a bonus feature that if it loses contact with the iPad, it will store datalink data itself and then push all of it out to the iPad when it reconnects.

This solution isn’t nearly as robust as the Dynon D1, especially considering the iPad isn’t always on a screen with synthetic vision or even connected via WiFi. But it’s also cheaper and comes with the weather and traffic. Note that traffic is of minimal use unless you have an ADS-B-Out transponder yourself, but we’ll all need one of those by 2020.

I couldn’t test the Clarity in the air, but, like the Dynon, it’s response and fluidity was impressive on the ground. To be fair, this isn’t the first combined weather and attitude system. WingX Pro can also accept ADS-B from a SkyRadar box and attitude from a Levil portable AHRS. But that solution is more cumbersome to set up and costs $500 more, all told. I have flown it one, and I found it good enough for an unusual attitude recovery and gingerly flying down through the (simulated) clouds using nothing but the iPad.

One of the benefits of this solution is the iPad could double as an emergency navigation system as well as flight instrumentation. WingX Pro can run in split-screen mode so you can keep the synthetic vision visible at all times.

Vertical Power’s Runway Seeker
The $8000 Vertical Power VP-400 doesn’t fit in your pocket and it doesn’t do weather. It’s also for the experimental (or LSA) market. So what’s it doing in this review? It’s here because it’s a glimpse of what our avionics future could entail—and it’s just plain cool.

First a bit of background: Vertical Power has been in the business of electronic circuit breakers and smart systems for experimental aircraft. These put control all electrical systems and devices, such as flaps and gear, in one place and controlled by one screen. The new VP-400 can be that screen (touchscreen control, no less) but it also works as a backup EFIS complete with synthetic vision.

That would be a nice piece of equipment in itself, but the addition of Runway Seeker is the real slick part. If you were to lose your (only) engine, you could push the Runway Seeker button and get three-dimensional guidance for a glide to the runway.

This isn’t just vectors to the nearest airport. The system evaluates, distance, winds, obstructions, runway length and the glide characteristics of the aircraft. Then it calculates a curving path—complete with spirals if necessary—to have the airplane roll out on final at 500 feet at 1.3 Vso. Throughout the descent, the VP-400 provides flight-director guidance to stay on that path. You could fly that by hand or engage the autopilot to do it while you run emergency checklists.

To ensure you hit that target for both position and speed, the system monitors your total potential and kinetic energy throughout the descent and displays it on a meter on the right of the display. The system will pitch up or down accordingly and even raise and lower flaps and gear as needed to bleed off energy or squeak out more glide. It also prompts you for items it can’t control, such as flattening the prop pitch.

The 3D path to the target airport is calculated steeper than best glide so there’s a buffer in case changing conditions, like a low-altitude headwind, require a bit more energy at the end of the descent.
You can see throughout the process which airport the system thinks is best, but also what alternatives are option. It’s a touch screen, so picking a different airport and landing runway only takes a couple taps.

The guidance is to 500 feet and short final. But if the pilot doesn’t take over at that point, the system will ensure the gear is down, the flaps are full and then trim for the slowest descent it can muster. It’s not quite “autoland,” but it’s likely all the occupants will live to fly another day even if the aircraft takes some damage as it meets the ground.

Tomorrow’s Avionics, Today
These gadgets are handy and practical, but I think they also give us insight into the panel of tomorrow.

Vertical Power’s system is a great example of what smart avionics could do: constant awareness and complex calculations behind the scenes that stand ready to help a pilot in trouble, or prevent the trouble from even starting. But they can do it without being obtrusive. They can do the job themselves—flying the aircraft to the runway in this case—or give the pilot the tools to do the job well with options to adjust on the fly.

That kind of cockpit will always be big bucks, but Sagetech and Dynon show how the rest of us might reap the benefits of cutting-edge gear. This non-certified, portable stuff is so much cheaper than certified gear, yet seriously capable. It opens the door to squeaking by with the minimum certified gear installed, but supplementing with plenty of non-certified extras. The result could be a cockpit with 85 percent of glass capability at, maybe, 20 percent the cost.