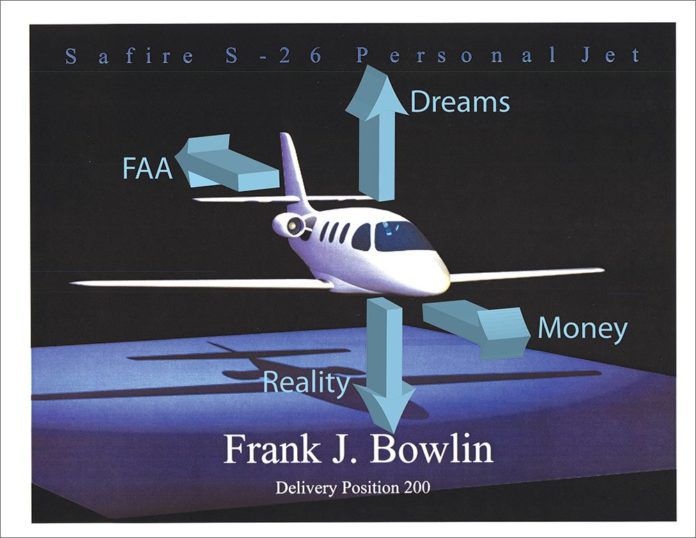 Drawings like this have been “out there” for years, although I’d not seen one until a contributor recently forwarded one to me. This resonates mostly because the humor stems from a truth that is a disconcertingly sober one. Let’s explore these four forces.

I grew up in aviation in the era of Jim Bede. Bede was many things, including a superb aircraft designer and quixotic aviation visionary. His designs set new standards for speed, efficiency and, often, unrealized claims for the same. Yet, the name Jim Bede still inspires visions of futuristic, fast, efficient aircraft with an almost visceral appeal.

Of course, Bede wasn’t alone. Fast forward to about a 15 years ago when dreamers predicted the design, manufacture, certification and delivery of very light jets or personal jets with—you guessed it—unrealistic goals of speed, altitude, load and most of all, low price, initially around $1M. Of course, none achieved the original dreams and the few that were produced fell short of their initial promises until Cessna doused the market with realism.

These dreamers shared not just the ability to see beyond normal limits, but they also shared the delusion of visions that reality could not achieve. Inevitably, realization of their dreams was stymied by physical or engineering limitations and almost always by financial ones. But their dreams have extended the envelope for all of us and led to significantly improved designs, just as excess lift overcomes gravity to allow flight in the first place.
Of course, everybody knows that it takes a lot of money to achieve flight.

With hangar, insurance, annual, taxes, etc., ownership of even a modest aircraft quickly exceeds $5,000 a year without flying. Add gas near $6 a gallon or more and, well, it ain’t cheap to fly.

And don’t even get me started on parts prices. I recently broke the vacuum gauge in my plane. A replacement from the airframe manufacturer was a staggering $5,000—for a vacuum gauge.

And that brings us to the FAA. Let me start by saying some of the most gifted, knowledgeable and helpful people I’ve encountered in this industry work for the FAA. Unfortunately, they don’t seem to be the folks who set strategic policy and we increasingly suffer under a bureaucracy that’s far too bulky. Yes, our FAA provides us with one of the best general aviation environments in the entire world. But when you get to the local level, you’re as likely to run into petty politics and job preservation activities as you are a person who’s genuinely supportive within the constraints of the regulations.
Nonetheless, given enough thrust from money you can overcome the drag of bureaucracy and actually achieve flight. As with the real forces, the trick is in balancing all four to be able to sustain useful flight. Yet, we find that these four forces do balance to produce the flight we enjoy, and it probably couldn’t work any other way.

By the way, does anybody want to buy my Safire Jet delivery position?
— Frank Bowlin