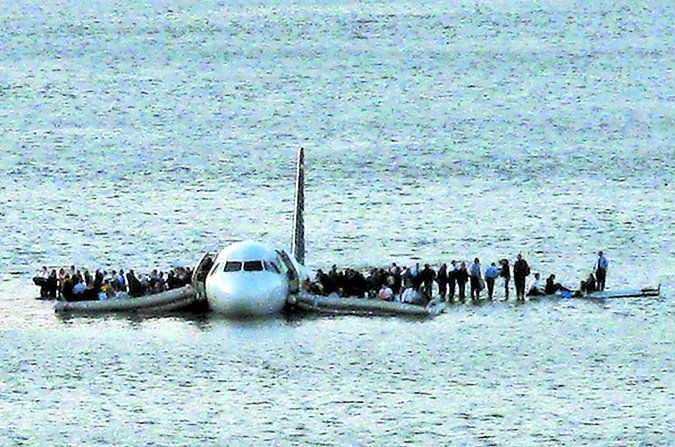 I am sick of hearing about Sully and being asked what I, a retired airline pilot, think. Now, the movie. Argh!

It’s been a long time since I provided any primary flight training. But as I recall, once it appears that the student will, in fact, stick with the training long enough to attempt solo flight and hopefully go on to obtain their private pilot certification, we start teaching them in earnest how to handle a power failure. Then, power failures remain an important part of our training for most of the rest of our flying careers.

In case you might need a quick refresher (Really?), three of the top considerations in a total power failure are: 1) immediately pitch and configure for best glide, 2) head towards a suitable spot within gliding distance for “landing,” and 3) time permitting, try to figure out and fix what when wrong.

I was flying the line when Chesley Sullenberger and Jeff Skiles piloted their Airbus glider to a successful ditching in the Hudson River. Most of my colleagues and I scoffed at how the popular media immediately labeled Sully and Skiles as heroes. Our reaction was that they didn’t do anything more than a competent crew was expected to do. The talk around our crew room and others I checked was bewilderment over public reaction to a crew that really just did pretty much what they were supposed to do under admittedly difficult circumstances.

Sully and Skiles did little more than what we expect from a student pilot with less than 10 hours in his/her logbook—gently hit the soft spot. Looking around the man-made terrain in the vicinity where they lost both engines, the river provided the only suitable “landing” site. So, that’s where they went. It was a no brainer. (“Okay, should we hit the buildings, try for a narrow busy street, or perhaps that big, wide, gentle river?”)

In their expected demonstration of competence, they ditched the ‘bus into the river softly enough that everybody survived. Would you have done any less?

Sadly, the answer is “possibly.” A review of NTSB power-failure accident reports shows an alarming number in which the pilot didn’t do as well. In many cases, the pilot botched speed management by either stalling shortly after the power failure, or hitting the ground way too fast. In those instances the outcome was, um, less than ideal. Other pilots simply didn’t hit the best soft spot they could, instead hitting buildings, trees or other immovable objects—again with suboptimal results.

So—actually reinforced somewhat by the movie—instead of hero worship, the lesson we should take away from the mishap of USAir 1549 is simply not to panic, but to use your best judgment to manage the aircraft while aiming it toward the soft spot. Sully and Skiles dramatically demonstrated that if you do those things—things you were taught before you soloed your first aircraft—everyone can indeed survive, even if you’re flying a transport-category aircraft with over 150 folks on board—a good lesson.

Yes, if you lose all power, hit the soft spot. Gently. You’ll at least be a hero to your family and passengers.