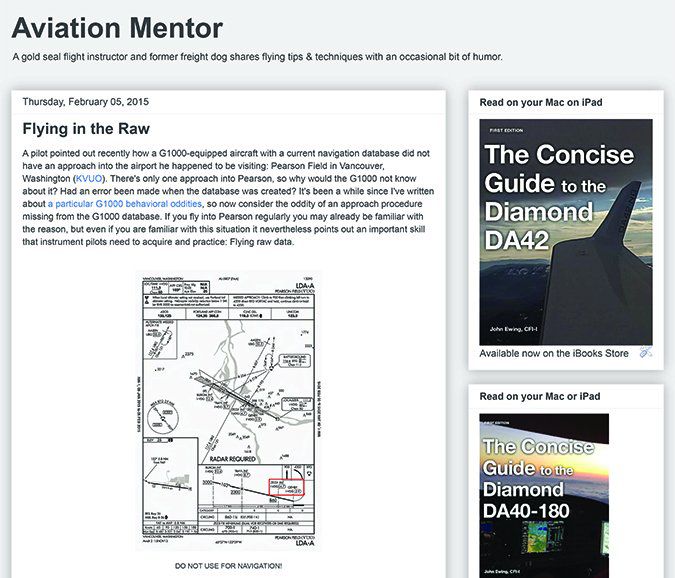 Our article was the April IFR Clinic, “Flyin’ in the Raw” by Jeff Van West. In 10 years of knowing Jeff and calling him a friend, I’ve always found him to be a professional aviation journalist of the highest caliber with a strong moral center. So, the accusation was a challenge to believe, but on finding Mr. Ewing’s original article, well, something didn’t quite smell right. I needed to look into it.

I contacted Jeff with the details. He was embarrassed and chagrined. It seems he carries a little notebook with him and jots down interesting approaches, ideas he has for articles, and other seeds for his creative endeavors. He’d read John’s web article about an unusual approach and noted it so that he might also write about that approach someday: “Gee, that’s an interesting approach. I should write about it…”

Now, the approach in question is unique—it’s the only one of its type. So, any article analyzing that approach type is going to cover the same approach and go over much the same ground. Jeff’s version did that using original prose. The kicker, though, is that the title was the same. We attributed this to it being a catchy title that simply stuck in the back of Jeff’s brain and surfaced when he wrote about that same approach.

Plagiarism? Not quite, but uncomfortably close. We reached out to John Ewing to confess and make nice. John accepted our apologies and has even agreed to write for us occasionally.

Aviation is a small world; there are a limited number of topics on which one can write. Additionally, journalism is a specific enough trade that when you combine it with aviation, you have a very small world indeed. Thus, it’s inevitable that there occur certain overlaps and (gasp!) even certain duplications. Granted, this one innocently went too far, but just how many unique articles can be written about a single, odd approach without covering the same ground?

It’s been said that truly original thought is rare; most of the ideas we get are triggered by something related. That’s been illustrated to me repeatedly as I occasionally scan other aviation press. Our sister publication, IFR Refresher, is edited by Ted Spitzmiller. I met Ted when he took the helm of IFRR and found that we live near each other. We each work from a home office, so our efforts could take place thousands of miles apart rather than a couple dozen. We don’t collaborate, but it’s amazing how often we publish articles on similar topics in a similar time frame.

It’s for this reason that I don’t generally read other aviation publications; I simply don’t want to risk getting an idea planted in my brain from any of the other excellent mags. Nonetheless, overlap happens.

Rest assured; that overlap isn’t deliberate, but is topical—just as two newspapers cover much of the same news. And if you occasionally see an article that reminds you of another, take the replication as a sign that it’s good, important stuff—and maybe even read it twice.