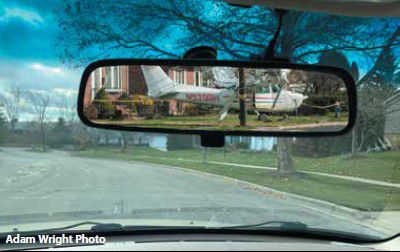 Sometimes we stretch the regulations, or worse, common sense. Some examples include VFR weather minimums (scud running), night currency, or even logging.

Don’t get me wrong; I’m not advocating that. But who among us hasn’t occasionally stretched the speed limit on a lonely country highway or even a busy urban commute, or committed some equally innocent-seeming infraction of the FARs we generally try to follow? We’re human; it happens to us all, even though our self-image might say otherwise. Ask pilots featured in this issue’s annual “Stupid Pilot Tricks;” most probably didn’t see anything wrong until, well, it went way wrong.

A reader’s teenaged son wanted to learn to fly, so Dad was teaching him. Son was handily accomplishing all of the flight details from planning, preflight, engine start and taxi, take off, climb, cruise, and descent. Approach and landing were certainly next. To give his son the maximum realism, our reader sat in the right seat as his son was learning from the left seat.

Our reader wanted his son to be able to log this time. Makes sense, except Dad was not a CFI. He asked me the best way to log that time, saying he’d only been logging it as total time, not dual received, PIC, or anything else.

I’m not a regs guru, but I can usually fumble around to find what I need. The gentleman’s son couldn’t log the time because it didn’t meet the type-of-experience requirements (§61.51(b)(2)) of solo, PIC, SIC, or instruction received from a qualified instructor. The reader went on to say that even if the time couldn’t be logged, there was no restriction on which seat people occupied. Besides, who’d know?

That’s true. But this brings me to my long-overdue point. Whenever I find myself thinking about the legality or appropriateness of my actions, I ask myself, “What would a reasonable person conclude from the accident report if something went awry?”

Try this hypothetical report: “The private, instrument-rated pilot was sitting in the right seat. His son was in the left seat. His son was excited to be learning to fly with his father as he explained to his friends. The plane was on short final to land on a good VMC day, when, according to observers, a wing suddenly dropped and the plane impacted the ground nose low.”

Obviously, Dad was teaching his son to fly, even though Dad wasn’t a CFI. Sure, the regulations don’t dictate where we sit, but the circumstances make the instruction obvious, regardless of logging or exchanging funds. Note also that most insurance preclude using the plane to give instruction.

I’m not picking on this reader; the pleasant dialog we had about this merely triggered me pointing out that the best judge of whether or not to do something might indeed be how it looks in the rear-view mirror of life if something goes wrong. How’s the view in your mirror?