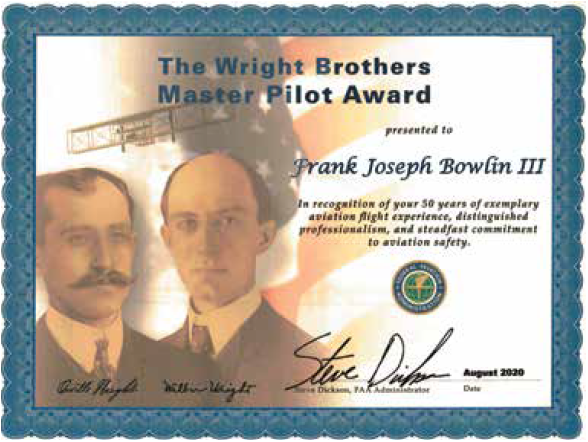 Perhaps you know of the FAA’s Wright Brothers Master Pilot award recognizing 50 years of safe flying. I looked into it but the documentation requirement put me off.

But, my wife fulfilled the documentation requirement as a gift to me for a recent milestone birthday. We were visiting my 97-year-old mother with extended family and my wife announced her accomplishment at a dinner. Everyone was impressed and congratulated me. My mother died a month later, so that was the last family gathering with her and it seems somehow fitting that she should see her first born honored.

Of course, my wife is proud of her husband and thinks this is a big deal. She quotes the FAA: “The Wright Brothers Master Pilot Award is the most prestigious award the FAA issues to pilots … This award is named after the Wright Brothers, the first U.S. pilots, to recognize individuals who have exhibited professionalism, skill, and aviation expertise for at least 50 years while piloting aircraft as ‘Master Pilots.’”

Me? Not so much. The biggest requirement is to fly for 50 years without incident, accident, violation, etc. I don’t think that’s possible. For anyone.

A cynic might say the award is for not getting caught. Is there any pilot who, in even just a couple years much less 50, hasn’t busted a reg, scraped a wing tip, wandered off the runway, or otherwise had one of those sinking feeling, oh $%^& moments? I doubt it. So, to me, this is more of a feat of endurance, of survival with a dash of good luck, not a singular accomplishment.

Nonetheless, it is something. That I’ve never failed a test or any of my nine (so far) checkrides, at least suggests I pay attention and try to fly safely and correctly, just like the over-6200 other Master Pilot award recipients. Surely, there are thousands more pilots who qualify but haven’t applied.

Some recipients think this is a major accomplishment to be celebrated. Clearly, the FAA does, so maybe it is. I’d like to think that this award recognizes superior skills or knowledge. Instead, it honors 50 years of coloring between the lines, so to speak. But, doesn’t that require a certain level of skill and knowledge? So, perhaps the most notable accomplishment of all is indeed having led a boring life as an active pilot with enough skill and judgment to avoid many—and safely survive the remaining—inevitable oh $%^& moments.

While some of us Master Pilots (I do like the sound of that.) choose to be self-deprecating about it, our families probably make a big deal of it as my wife has. After all, it’s their accomplishment too because they allowed us the freedom to pursue a goal, a career or hobby, that takes so much of our time.

So, if you qualify and even if you’re not inclined to seek the award for yourself, consider doing it to recognize your family. They’ll think it’s a big deal, too.