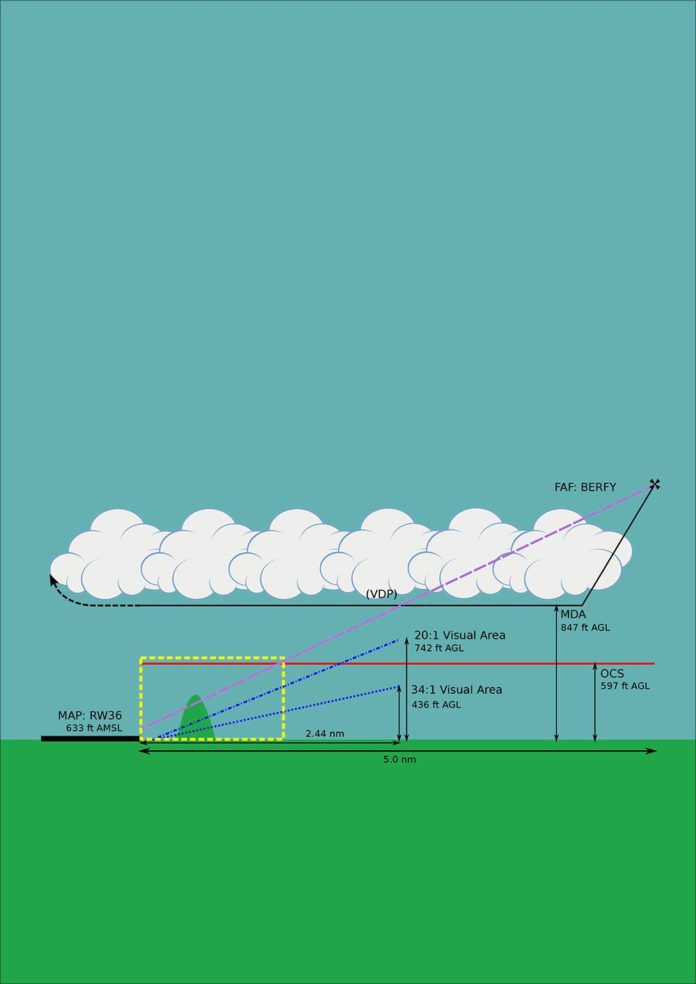 Last month we published an excellent article by Lee Smith, “Danger Below MDA.” In it, Lee points out that for many non-precision approaches you can’t tell from the approach chart, no matter whether you’re using AeroNav or Jeppesen charts, what level of obstruction clearance you have—or don’t have—below the MDA on your way to the runway.

As we researched this topic, we realized that this was just the tip of the iceberg. The vertical descent angle is surveyed in the US, but the results of that survey aren’t readily depicted on the approach chart. Consequently, the burden is on the pilot to see and avoid obstacles once you leave the relative protection of the MDA.

This is especially true if you’re using derived or even published vertical guidance from your GPS navigator. Sure, vertical guidance above the MDA is typically safe. You can follow it with little more concern than monitoring stepdown altitudes along the way. In fact, depicted vertical guidance should even provide clearance for those stepdowns, but it’s best to monitor and make sure the cartographer was good at geometry.

However, GPS vertical guidance doesn’t stop at the MDA. Instead, it usually continues all the way to your threshold crossing altitude or even to the runway. Lee Smith is busy writing a follow-on article that will explain exactly what to expect from your navigator’s non-precision vertical guidance.
I once had a primary student who particularly struggled with landings. After working with him for what seemed like an eternity, I finally got him to the point where he could get the airplane on the ground safely most of the time. But, he usually had to work so hard to get those wheels on the ground that once he finally landed, he let out a giant sigh of relief and pretty much disengaged, as if to say, “Whew. Glad that’s over.”

He essentially became little more than a passenger as soon as he heard the last thump. One day in a crosswind… Well, you know the rest, and you active CFIs out there probably face this daily.

We instrument pilots tend to do something similar at MDA. Once we get there and see the runway, we pretty much relax. We let out a sigh of relief as we “go visual” and head through the mist to the faint image of the runway. All the while, though, we’re still keeping at least one eye on the vertical guidance, just like we learned to do on an ILS. (Remember being told, “Don’t dive…”?)

This non-sequitur can get us into trouble. We feel safe because we’re “visual” but we stay on the gauges to some extent. While this is generally good, you should be aware that it’s still possible to tragically hit some obstacle while the glideslope needle is centered. Watch for the detail in a future article, but for now let me leave you with a warning: On a non-precision approach with vertical GPS guidance below the MDA, get your head outside and fly visually.

Being on glideslope on the GPS does not assure you’re clear of obstacles.
— Frank Bowlin