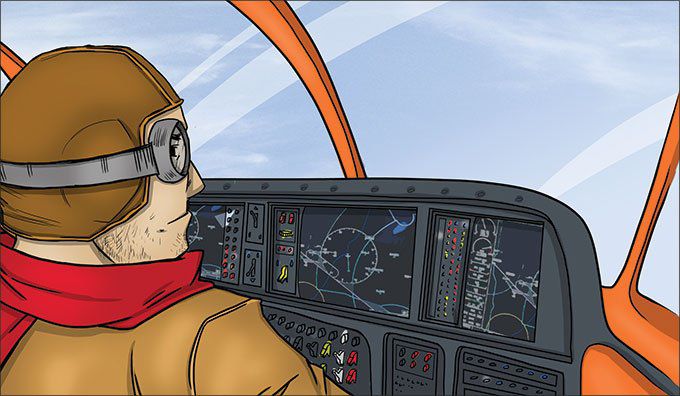 I just attended the insurance-mandated recurrent training for my C340A that I haven’t flown in years. I made my share of mistakes, most of which the scenarios are designed to uncover. A few of ‘em really made me think about things.

And that’s really what IFR flight is all about. Anybody with even modest hand-eye coordination can operate a fixed-wing aircraft in instrument conditions. Adding all the fancy gadgets we have these days just makes it even easier yet. “Here—keep this little airplane symbol between those crosshairs to follow the line on the map.” Even if you haven’t got much acumen for video games, chances are you can at least do that.

Sure, not everybody has a flight director, so managing an approach can require a bit more effort. But once you get the attitude basics down with pitch, power, airspeed and altitude, you can handle all the normal IFR flying tasks. Until…the…procedures…start. That’s where it gets messy for most of us.

Assuring a safe outcome to an IFR flight isn’t so much about controlling the airplane. It’s about thinking, briefing, considering alternatives, understanding processes and procedures and exceptions, planning ahead and knowing what to do next. It’s a head game. And if your head’s not in the game, bad things can and do happen.

Like when I was in the sim flying an unfamiliar approach. I started a descent to the next fix as prescribed on the chart. I’d descended about 400 feet before I realized that the descent to the next fix that I was performing to handily was to the fix after the next fix. I’d been at the proper altitude for the current leg and started descending as if I were on the next leg. Oops. I hope there are no rocks in the way.

There were other mistakes, of course, and I won’t parade the list across these pages. As I later reviewed each mistake, each exercise, each approach, the takeaway for me was the realization that all of the mistakes were failures to think and pay attention. And considering that I fly jets for my day job, that’s a sobering thought indeed.

One of the best ways to address these mental errors is recent proficiency and familiarity. In this case, I was suffering in both areas. Yes, I fly most every week, but the flying I do is in a totally different airplane with different avionics and in a different environment. This training was all about a GA piston twin with a bunch of unfamiliar GPS approaches.

The old saw about train like you fly and fly like you train was in full effect for me. Since I was well outside the zone in which I regularly fly and train, it was about the same as if I hadn’t flown in years.

So, the pilot’s sweat lodge was the perfect place for me to reestablish this train-fly/fly-train cycle. Of course recurrent training is just the first step and to make that training count, you have to follow it with enough of the real thing. But, after a couple days of intensity in the sim, I can now say that, once again, I’m familiar enough to have the time to think…about…it.
— Frank Bowlin