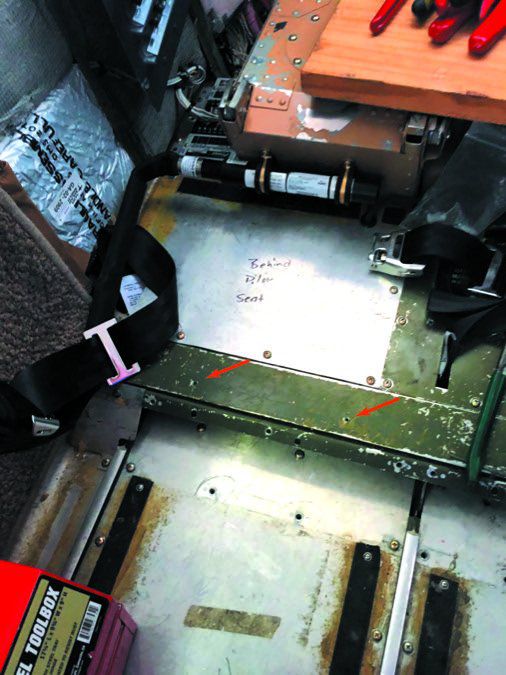 We’ve all lamented the frequent difference between legal, safe, and even occasionally right. I just got slapped with a many-thousand dollar reminder of that whole concept.

A small custom book case for charts and stuff was long ago installed just behind the pilot’s seat of my Cessna 340A. I used it for years, but eventually with three sources of e-charts on the panel plus an iPad on my lap, I stopped carrying paper and removed the bookcase.

The airplane is in annual inspection at a shop that was convenient for other reasons, and was recommended, but unfamiliar to me. I prefer to know a shop before engaging them but, given the other factors, I went with the recommendation. I have no regrets.

I got a call from the inspector asking me about the bookcase. The installation was done by drilling and tapping two #6 holes into the forward fuselage carry-through spar cap. Drilling holes there is a giant no-no according to Cessna. So, the inspector asked when it was installed and if there was any documentation to cover drilling those holes.

As much as I dreaded the thought of pouring through 37 years of logbook entries, I undertook the task figuring it was hidden somewhere in the otherwise excellent records. It wasn’t. I looked again. It wasn’t.

However, I did find an entry repairing that bookcase 21 years and over 1500 hours ago. So, I know the bookcase was installed at least that long ago.

While I owned the airplane, it was inactive for about 10 years. Subtract that from the 21 years since that bookcase repair, and that leaves at least 11 annual inspections that failed to note these holes lacked any approval. Oy!

Nobody is claiming the holes are unsafe. But, without any documentation approving those holes, the airplane is not legally airworthy.

The eagle-eyed inspector gave me a couple choices. He could close it up and document the work he’d done with no mention of the holes (assuming I’d have somebody else do the annual, someone likely to overlook those holes).

The extreme option was simply to replace the offended parts. I didn’t bother asking for a quote; I knew that was the break-the-bank option.

The intermediateand most practicaloption was to engage an FAA designated engineering representative (DER) to see if there might be some way to get the holes approved.

I considered the first option, at least casually. But, I figured it was just a ticking time bomb, waiting for another inspector to notice the holes and repeat the whole exercise. Besides, the cost of walking away from an annual in progress would largely offset the cost of the DER, or so I figured.

A wise man once said, When in doubt, do the right thing. I try to follow that advice, so I engaged the DER.

We’re not done yet, but the anticipated fix is simple and cheap. All in, if the proposed repair is satisfactory, the whole thing will probably hit $5000.

Am I upset thinking the inspector unnecessarily picked nits? No. He was just extremely thorough and that’s what I claim I want. I am a bit frustrated with the situation and that it wasn’t caught before now, but the whole thought exercise has been enlightening, and a good test of my resolution to maintain my aircraft as thoroughly as possible.