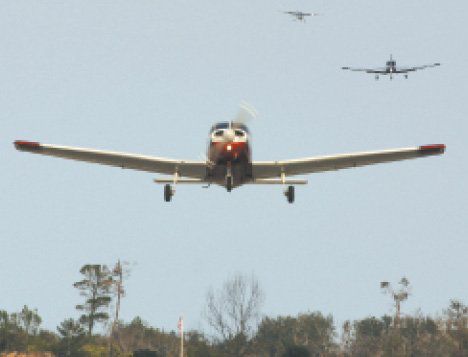 Most often, I fly for purposeful travel—not pure pleasure—and some of those trips are rather long. I plan from end to end, seeking optimum routing that minimizes distance, provides reasonable navigation fixes, and avoids special use airspace. Then, if the distance demands, I’ll look along that route for a suitable fuel stop.

For me, “suitable fuel stop” means an airport with some approaches, a long enough runway, and the cheapest fuel I can find. Airports meeting those criteria are usually small, rural airports because that’s where the cheap gas is.

On a recent trip, my stop was nontowered and obviously had a lot of training. I ignored that during planning. Mistake #1. Nearing the airport, listening to CTAF, I heard a steady stream of traffic calls, suggesting it might be challenging to fit into the pattern.

I made a standard 45-degree entry to downwind and fit right in. There seemed to be—mistake #2—a nice opening that I took, while staying outside the close-in pattern work of all the trainers that was too tight for me.

When one enters an unfamiliar pattern full of primary training, one’s assumption might be that one of those aircraft will do something incorrect. That wasn’t the case. All the students and instructors in the pattern did exactly what they were supposed to do. So, I concluded this training facility was well run and well disciplined. I was impressed.

Except the interloper (me) didn’t do as well. I failed to recognize and adjust to the main factor in this busy pattern—they were flying trainers that were on downwind at perhaps 80 knots or less and I entered downwind going half again as fast. Mistake #3.

So I was overtaking the trainer in front of me, but I was flying a larger pattern, so I simply stayed outside of him and let him turn base while I extended my downwind. By then I should have fully assimilated the speed difference. I didn’t. Mistake #4.

After what seemed like enough distance, I turned base then final, still flying at my normal pattern speeds, now about 100 knots. Mistake #5. I was still too close to the final traffic in front of me, so I made an S turn, a meaningless attempt that resulted in steep turns and losing sight of the (closely) preceding traffic. Okay, mistake #6.

I finally wised up, broke off into a parallel upwind and tried again, this time properly slowing early and making sure I accommodated the speed differences. Probably at the same time, the instructors and students in the pattern saw me as the jerk I was in the fast twin and gave me more space than I deserved.

Clearly, this was a humbling experience. I’m left wondering how many of us who are more than a few decades and a few thousand hours past flying trainers at 60 knots would do better. Your takeaway from this self-deprecating story is that no matter what you fly, you’ve got to play well with all the others, be they fast or slow, pro or student. I’m glad I relearned that lesson with no worse than some personal embarrassment. And, the students probably learned to watch out for fast twins with inattentive pilots.