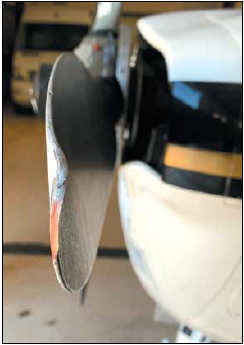 I feel the need to share my recent screwup with other pilots because I firmly believe that we can all benefit from the experience of another.

I’m stewing in my disgust and embarrassment for a recent mistake. I make every effort to be a conscientious pilot who’s constantly learning. My recent mistake has produced embarrassment, frustration, exasperation and finally, doubt in my ability to fly safely. Nonetheless, I must accept that I’m a fallible human.

I recently had a new panel installed in my 2001 Beechcraft B36 TC. Fuel flow was 2 to 3 gallons low, causing CHT issues. I rushed out of work early to fly to a nearby town for repairs. Arriving at my hangar a little rushed and harried, I noticed a continuous leak from my right sump. I was able to get the leak to stop with a little finessing.

It is normal for me to leave my cowlings open between flights for trickle charging and inspection. The wind was blowing. So once I pulled the plane out with the tug, I was concerned about the cowlings and closed them. I did my walkaround conscientiously, yet in a hurry, going through my preflight. I walked back around to the right side of the plane and climbed into the cockpit. Checklist complete, I started the engine and heard a strange and unusual sound. With terror I realized I’d left the tug attached.

A cursory glance at the tug showed no damage. The prop showed no damage. Where the sound came from I was unsure, but everything seemed fine. I was rushing to get to the mechanic, so I climbed back in and made the short flight uneventfully.

The next morning my mechanic called to ask if I have a red nosewheel puller. My heart sunk. My propeller showed damage on the tips. Obviously now, the sound I’d heard was the propeller striking the nose-wheel puller. How I missed that is beyond me.

At this point, I’m facing at the very least, a new or refurbished propeller, an engine inspection and likely rebuild. I just lost my plane for
a couple months and am facing a monumental repair bill … simply because I became distracted and missed something so incredibly basic.

Aviation can be extremely safe—unless we do something really dumb.

Name provided but not published to avoid adding humiliation to embarrassment.

Thanks for sharing your “True Confessions” story. Hopefully, by now you’ve forgiven yourself … or at least gotten a few good nights of sleep.

This is a surprisingly common oversight. I once saw a Cessna in the pattern with an entire tug, gas motor and all, still attached to the nose wheel. I can’t imagine what kind of abnormal trim settings that required!

I knew a guy in Alaska who flew Twin Otters for a local airline. The Twin Otter has no APU, so to keep the lights on with the engines shut down, they used a GPU. He once taxied nearly all the way to the runway before realizing it just didn’t steer correctly, dragging that GPU along. About the same time Ground suggested the station might want their GPU.

I’ve done exactly the same tow bar trick on a Mooney. After hearing/feeling the jarring bump as the tow bar handle caught the seams in the concrete as I taxied, I realized something was amiss.

The next time that happened, I recognized the bump and sound right away. Hmmm… “Maybe a procedure change is in order.” I thought to myself. So, I changed my preflight procedure and added an item to my Before Start Checklist: Towbar—Removed.

At least now you can put a checkmark in the “Things I’ll Never Do Again” list, by the line, “Forgot to remove tow bar.” After about 8000 hours, I have many such entries in my list. We all do.

One last thought: The mark of a good pilot isn’t the mistakes he avoids, but how he handles the ones he inevitably makes. I’m going to suspect that you learned your lesson and took steps to never do that again. That makes you a good pilot. —FB

May I suggest your writer of “Remarks” get some sunshine and fresh air?

As a new subscriber, the first issue I received details your editor’s amazement that a stranger can be so nice and in the second issue I am told he hopes he knows when he gets too old to keep flying. Geez Louise—how depressing!

Frank, the definition of old is dead. So enjoy your life and start writing something upbeat.

I think you might have missed the point of “You Meet the Nicest People” in May. In general, I was complementing our aviation community while also making the additional point in the last paragraph, “In an age where hate is in vogue,
my wife and I were reminded that such kind and generous people like Eric still form the backbone of our aviation community.” Of course, I was also railing against the divisiveness that’s becoming more common and more acceptable in society today.

“… the definition of old is dead.” Sorry, in the context of aviation, I have to disagree. I’ve seen too many examples of pilots who should have stopped flying years ago, but ego, pride, or simple ignorance of their own incapacities kept them in the air. And, I don’t point these out lightly, but only after some boneheaded mistake they made came close to a disastrous outcome.

One last point: Opinion pieces are just that—an opinion. Most editorials are intended to provoke thought, either in agreement or even in vigorous objection. If they’ve produced that thought, regardless of it being in agreement or opposition, they’ve been effective. That these two pieces inspired you to take a moment to express your opinion suggests that they were successful.

Thanks, Bill, for your note and for reading IFR. Hopefully, you’ll find my future Remarks more pleasing. —FB

In the July 2020 issue Killer Quiz, “Slo- Town Wines,” the answer to #3 essentially says that you can’t substitute GPS for a localizer. I disagree.

Receivers certified under TSOC145/ 146 are certified as sole nav, they are not supplemental nav, they therefore do not require any ground-based facilities to be operational or panel-mounted avionics installed or operational. So, a modern WAAS GPS should be able to substitute for a localizer, especially when the loc is inop.

Thanks for any insight you can shed on this issue,

I agree that with our current crop of navigators, there’d be nothing unsafe about using properly installed GPS to fly a LOC-based procedure. But, as we well know, there is often a big difference between “safe” and “legal” inside the FAA regs and other operational guidance. Thus, until AC 90-108 gets modified to permit, not prohibit, substitution of GPS for a localizer, we can’t legally do it. But, if I were flying this for real in serious weather, if the procedure is in the database, I’d definitely use GPS as primary nav for the ease it offers. But to be legal, I’d also need to have the localizer dialed up somewhere.—FB