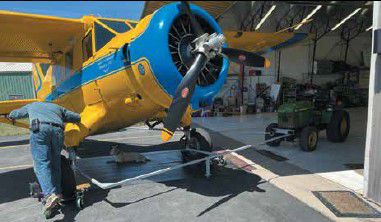 I’m curious about your comment in “It’s Raining Regs” IFR Clinic back in August 2018, where no alternate is required per §91.167 even though the ceiling is only 1800 feet.

We assume you’re referring to the statement in the article, “You needn’t file an alternate airport per exceptions in 91.167, and its 1-2-3 rule. The terminal forecast for Allentown’s Class C airport a few miles away says it’ll be scattered clouds at 1800 feet with rain and 5 miles visibility at your ETA.”

Scattered clouds do not constitute a ceiling. A ceiling requires broken or more. Hopefully, that clarifies things for you. Thanks for the note and for reading IFR.

But, Complexity Can Be Easier

Liked your editorial about consistency. However, having sold my Cessna 340, I’ve discovered a reverse to the complexity issue.

With the 340, I had weather, climb capability, deice equipment, pressurization, and speed. Now that I fly a Cessna185, a Norseman, and animal rescue missions in a Caravan, flight planning is totally different.

A few clouds over the mountains in the Caravan can be a real hassle if there is the slightest amount of icing. Density altitude in the 185 is critical in the Idaho back country making many departures limited to cool mornings. The Norseman requires extra planning just to get it out of the hangar and then back in. (51.5 foot wing span and a 46 foot hangar door)!

Now I have many more canceled flights where with the 340, I rarely worried about no-go situations.

Sure complexity can be daunting but it sure can make life easier!

You make good points, Brent. And, thanks for the photo of the Norseman. With that custom jig, the need for dollies under the wheels, and even a dog to supervise, what could possibly go wrong?

Don’t Be Afraid To Be the PIC

I just read the “When You Gotta Go … Around” sidebar in “Unpleasant Surprises” in June. At my airline, our flight ops department has made it clear that while the reg states that all passengers must be seated when we are moving, as pilot in command we have full discretion to use common sense on that rule.

So we are now able to move with someone standing if it’s in the broader interests of safety and, yes, also if we’re impeding the flow of traffic at a major airport. So in the cases in your article, I would absolutely have taxied clear of the runway to prevent another aircraft having to go-around, and I would also keep taxiing (slowly and gently) to keep the operation going at a place like ORD or LAX.

(Although, in that same sense of safety, I too would have canceled the takeoff in your 600/600/600 situation.
Choosing to take off with someone standing up is probably not going to hold up at the hearing.)

The take-away of all of this for a GA pilot: don’t be afraid to be the PIC. Rules are there for a purpose, but one of those rules is §91.3, which gives the PIC broad discretion to do what’s necessary in the name of safety. Helping prevent a go-around is just common sense, and surely falls under that description.

Keep up the great work; still loving the publication.

Are “no-transition” SIDs and STARs accepted by ATC?

I recently compared my iPad Fore‑ Flight app with my Garmin GTN 750Xi app and discovered that ForeFlight provides “no-transition” SID and STAR options but the Garmin 750Xi simulation app does not. Is Garmin missing a potentially useful option or is Fore‑ Flight providing an unusable option?

No-transition SIDs and STARs are absolutely accepted and frequently even assigned by ATC. You might even say that the namesake fix for the procedure is yet another “transition.” Yet, Garmin’s GTNs do not recognize or permit them.

We’ve had this discussion with Garmin in the past and hit a brick wall. Oddly, Garmin Pilot is happy with no transition, but when you try to load that directly into your GTN (or Xi), that flight plan segment causes the GTN to puke.

The workaround, of course, is to load the procedure with a legal transition and simply delete the unneeded waypoints. Cumbersome, but it works.

But, thanks to your inquiry, we’ve heard through unofficial channels that support for no transitions is planned for a future GTN Xi software update. We hope that’s true, but they will probably leave the “bug” in “legacy” GTNs.

Which Way Do You Turn When?

The other day we were departing KTPA (Tampa) south on Runway 19R and the SID was the ENDED 9. Must have not been a busy day, because after flying the initial SID heading of 203 degrees, ATC just gave us direct LACEN.

Now, we tried to avoid some buildups and started a rather slow turn toward the right (shortest distance toward LACEN), but it was clear toward the left (the long way around). 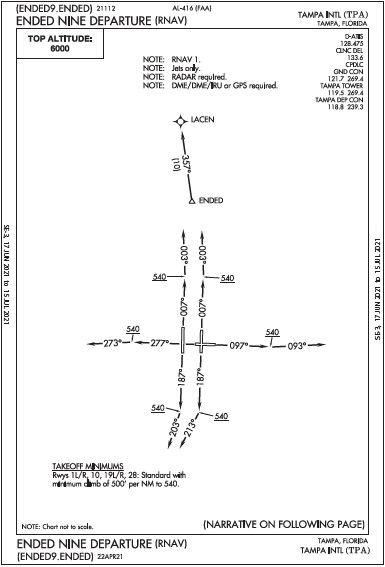 If given a heading or direct to a fix, are we to turn the shortest distance or is it up to us? I would say ATC assumes and expects that, what I am wondering from a pure regulatory standpoint here.

When given an instruction by ATC, you’re expected to promptly comply (per language in AIM 5-5-2 and 5-5-6). So, no, you couldn’t have turned the long way around, nor could you have taken a circuitous route to LACEN. Now, that leads to a question of what “promptly” means, but if your definition is slower than that particular controller’s, you’ll almost certainly get an “immediate” or “without delay” a bit later. Of course, you could always request what you wanted, adding, “To avoid some buildups.” You’d almost certainly get what you wanted, or at least some variation that works for both of you.