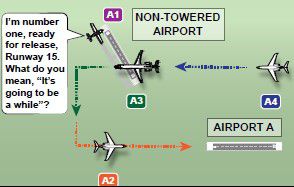 It’s not fun trying to make a left turn out of my neighborhood. It exits onto a busy, six-lane road. There’s no traffic light, just a gap in the median.

Cutting across steady traffic demands patience, timing, and good judgment. Mistakes can be costly. The asphalt is littered with shrapnel from cars whose owners tried to hit a gap and failed violently.

And, the “shooting the gap” fun doesn’t end there. As an air traffic controller, I’m often required to sequence aircraft in and out of adjacent airports with crossing finals or departure paths. Like crossing that road, it can be tricky.

What combination of techniques, procedures, and rules do controllers use to ensure aircraft in such close proximity stay legally and safely separated?

The first rule when sequencing aircraft to adjacent airports is ensuring the pilot locates the correct one. Landing at the wrong airport—“wrong surface landings”— can be dangerous, yet happens to pilots of any experience level.

In 2013, an enormous Boeing 747 Dreamlifter cargo aircraft landed at Col. James Jabara Airport (KAAO) in
Kansas when it intended to land at McConnell Air Force Base (KIAB), eight miles away. That same year, a Boeing
C-17 inbound to MacDill Air Force Base (KMCF) put its wheels down on Peter O. Knight Airport (KTPF), five miles away with much shorter runways. Both incidents made the national news.

As a countermeasure, when there’s a nearby, possibly confusing airport, ATC must point out both airports. In the ATC rulebook, FAA Order 7110.65, Section 7-4-3 (g) says, “In those instances where airports are located in close proximity, also provide the location of the airport that may cause the confusion.”

Imagine I have a Beech King Air on a 10-mile left base for Runway 27 at Airport A. The flight path lines him straight up for Runway 36 at Airport B. “Airport A, 10 o’clock, one zero miles. Airport B, 12 o’clock, one-two miles. Report Airport A in sight.” This is especially critical when the airports also have similar layouts. I’ve often had pilots report “airport in sight” and they have sighted the wrong one. When I outlined both fields, you could hear the hesitation in their voice. “Oh. Uh, yeah. We’ve got Airport A in sight now. Thanks.” “No problem,” I’ve said in the past. “We’re not winding up on the news today!”

Divergence is a common-sense way to make sure aircraft can’t get too close. Basically, if an aircraft’s course diverges by more than 15 degrees from conflicting traffic, and that course has it passing behind said traffic, those two aircraft won’t be a danger to each other.

Imagine two aircraft on 090-degree headings at 2000 feet. A1 is first, and five miles directly behind is A2, 100 knots faster. Normally, two IFR aircraft at the same altitude must be at least three miles horizontally or 1000 feet vertically. With the speed difference and same altitude, A2 will catch up to A1 losing separation.

Now let’s turn A2 to a 105-degree heading. They are already behind A1. Can A2 ever meet up with A1? No. They might pass closer than the three-mile minimum, but because of A2’s new assigned heading, they are guaranteed not to hit. Terminal controllers use this rule constantly. Centers can’t use divergence because their longer-range radars have a slower update time.

So, if the finals for each airport intersect at an angle of at least 15 degrees, ATC can use divergence to thread aircraft between each other. Imagine a Citation X straight-in to Runway 27 at Airport A. Meanwhile, Approach lines up a Cirrus SR22 for Airport B’s Run way 36. If the Cirrus passes behind the Citation, he can pass inside three miles with 90 degrees of divergence.

There’s certainly a measure of risk involved here. We try to keep an “out” available if things don’t go as planned, perhaps keeping one aircraft 1000 feet higher until we know for certain they’ll cross out legally.

If that sounds like fun, what if, instead of two intersecting arrivals, Airport B was departing into the final of Airport A? At least with intersecting finals, the radar controller can see all the players. With a departure, the conflicting traffic hasn’t started moving yet. So how can they plan for it?

First, the departing airport isn’t allowed to launch aircraft willy-nilly into crossing arrivals. Approach will put them on a “call for release” requirement—Tower must coordinate each departure individually. Approach will then build a gap in their final for the departure to get out.

If I were in Airport B’s Tower, I’d look at Approach’s arrival stream. Imagine they have a Citation X on final for Airport A’s Runway 27 and an Embraer 145 still on the downwind. I usually considered any aircraft on final or base already “committed,” as there’s not much room to maneuver. Aircraft on the downwind, though, can be extended to create gaps. With this picture in mind, I’d call Approach. “Request release N456CD, Runway 18.”

Depending on Approach’s comfort level or standard procedures, different things can happen. They might say, “Traffic, Citation 123AB, five miles southeast.” That’s the aircraft already on final. I’ll say, “Traffic observed.” “Behind them, N456CD is released.” Now, he’s trusting me to gauge speed and spacing and launch my departure, to pass behind the Citation. Meanwhile, he’ll extend his downwind Embraer traffic for me, building space. I’ll do my best to hit that gap, knowing Approach is working hard to create it.

Perhaps Approach’s procedures don’t permit such conditional releases. Instead, they can only authorize release at the moment the gap is open. In that case, they’ll tell me, “I’ll call you back.” Then they’ll extend their downwind traffic, wait until that N123AB is in a good spot, and tell me, “N456CD released.”

Either way, we’re working together to get N456CD underway. N456CD departs heading 180, passing behind N123AB, who’s on final heading 270. Meanwhile, Approach turns in the Embraer 145 towards Runway 27. They’ll join final passing behind N456CD. It’s a merry-go-round of applied divergence.

After arrival-arrival and arrival-departure problems, crossing departures is next. There are several ways this can be worked. Both airports could be placed on “call for release” by Approach and have to call Radar individually for releases. This involves a lot of coordination with Approach, which can add to the radar controller’s workload.

An alternative would be allowing the towers to coordinate between themselves. Here, one airport—typically the one with more or heavier traffic—could be designated the “master” airport.

Of course, adjacent airport issues can also affect a non-towered airport. After receiving your clearance while parked at the FBO, you were told to hold for release and advise when ready. Now you taxi out, hold short, and report, “Number one, ready to go, Runway 15.”

Approach responds, “Hold for release. It’s going to be a while due to traffic inbound Airport A.” Your airport is only six miles northwest of Airport A. The Approach controller is currently running a multi-aircraft left downwind sequence right over the top of you, vectoring for Runway 9.

When an IFR aircraft gets released from a non-towered field, the lowest altitude Approach can assign it is the MVA. That altitude is already occupied by descending arrivals. Also, Runway 15 departures are aimed directly at short final for Airport A’s Runway 9. There is nowhere for you to go, legally.

Approach knows you’re ready. They can keep subsequent arrivals higher so you can depart underneath or extend them out to build a gap. Either way, it takes time to comfortably protect for your departure.

You could taxi to Runway 33, winds permitting, and request release from there, flying away from the conflicts. Or, instead of waiting for a release, you can choose to depart VFR. Doing so voids your original clearance, and you’ll need to pick it up again in the air. Otherwise … just wait it out.

If departing VFR, please squawk 1200. If you depart on the discrete code you were assigned for your (now voided) clearance, our radar will detect you and think you are IFR. If you then come within three miles or 1000 feet of another IFR aircraft, our computer “snitch” will think we’ve had a loss of separation, requiring lots of investigations, paperwork, and general headaches.

Second, if possible, fly away from the conflicting airport. Think about it logically: if you couldn’t get your release on the ground, why would flying into a cloud of IFR aircraft make it any easier for ATC to give you a clearance?

Yet, I’ve lost count of how many times I’ve been running a dense final at 2000-3000 feet, and a pilot departs and calls for an IFR clearance at 2500 feet in the middle of my pattern. Then he gets snippy when I am “unable” to issue it right then because doing so would give me multiple separation losses. Flying just a few miles in a safer direction could have made all the difference for him. Alas, some pilots forget to pack their flight bags with common sense and patience. —TK

Now, say I’m working the tower at Airport A, the master, with two aircraft ready to depart my Runway 9. Airport B’s tower calls me on the landline. “Tower A, Tower B, I’ve got one ready to go on Runway 18.” I’ll tell him, “I’ve got two to go. I’ll call you back.” Using my notepad or another memory aid, I’ll note that I’m holding a spot for Airport B’s departure. If anyone else taxis out now, I’ll be sequencing them after Airport B’s aircraft. I promised him that gap.

I launch my two departures. Now, as with arrival-departure problems, I can address this in different ways. Maybe, if my procedures allow it, I can point out my airborne second departure to him and tell him, “Follow Citation 123AB.” Or I can call him back when the spacing’s good and tell him, “You’re number one.” If I have any more departures, I must wait until Tower B’s aircraft is airborne and in a good spot before I can launch.

This tower-tower technique factors into traffic management initiatives as well. For instance, a Center may require they be fed all departures with 20 miles between them. If Airport A and B are located only a few miles apart and launch aircraft simultaneously, it’ll be difficult for Approach to achieve the spacing.

Approach then considers A and B as one airport. Even if they’re not departing intersecting runways, Airport B’s tower will need to call Airport A’s tower for their sequence slot. This significantly reduces the workload, increases the safety margin for radar, and guarantees Center will get the miles-in-trail they need.

Working intersecting runways at two airports is a strange form of geometric basket weaving. You’re threading aircraft between each other, running them as tightly as possible while ensuring you’ve got diverging angles. Doing it successfully and safely requires some keen situational awareness and teamwork.