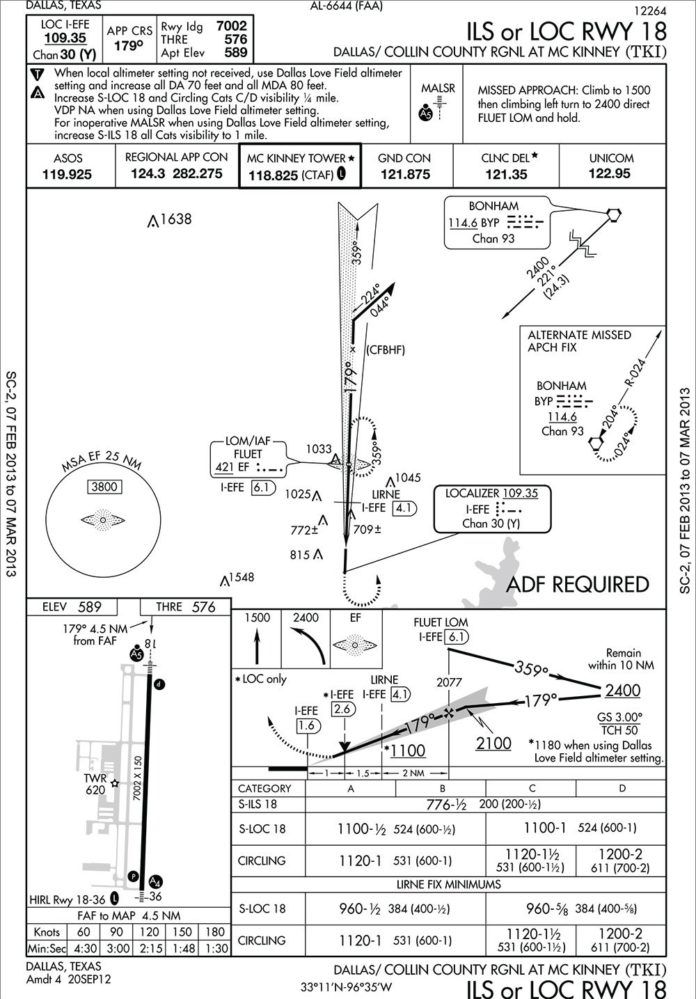 Where’s the Runway?
In December’s Readback, reader Mark Spencer asked about localizer offsets. In the answer, you said the offset value is not published for LDA approaches. That’s true for now. However a change to policy for the FAA will require charting the amount of offset for any ILS, LOC, MLS, LDA, LDA w/GS, RNP, LPV, LNAV and LNAV/VNAV approach.

…an inside source at the FAA
Oklahoma City, Oklahoma

Directory Assistance?
I thought I was out of surprises when I tried to get my IFR clearance on the ground at Osceola (KOEO). I called Clearance Delivery. When I got a live person I said I wanted to get my IFR clearance. He proceeded to give me Minneapolis Approach Control’s direct line. I asked if he could give me the clearance and he replied, “Yes. But I would have to call Minneapolis Approach anyway so you can call them directly.”

We asked Lockheed Martin and got this response:

“In most instances Lockheed Martin Flight Services specialists will obtain and relay clearances. However, air traffic controllers in some facilities may request that pilots call them directly for clearances.

“We encourage the pilot affected to contact us directly so that we may research the matter. Flight Services welcomes all pilot inquiries and feedback. Pilots may provide detailed feedback at www.afss.com via the Feedback and Contact Us pages.

“Flight Services also requests that pilots provide a date, tail number and contact information so that we may follow up on their inquiries individually.”

WAAS or Not
Tracy (TCY) and Byron (C83) are about 12 miles apart in Northern California. Both airports have 12/30 runways, and the Tracy GPS 12 approach follows the exact same path over the ground as the Byron GPS Rwy 30 approach, they just take you in opposite directions down to earth. Both are LPV approaches.

While flying the Tracy approach the GNS 430 gave me the LPV annunciation and displayed a glide slope on the HSI—as expected. But when I flew the Byron approach 15 minutes later, I only got an LNAV annunciation with no glide slope.

The Byron approach has the note about WAAS unavailability, but the Tracy approach doesn’t. How can one approach provide the LPV, while another approach over the exact same ground path suffers a WAAS VNAV outage?

As you note, the approach into C83 has the WAAS unreliable symbol and TCY does not. What is peculiar is that both approaches show revision dates in 2012, at which point WAAS covered just about the whole continental US, minus some of the far corners.

Charted WAAS unreliability is unknown to the GNS 430; instead it constantly calculates accuracy and integrity to fly the best approach available for the location and time. In the period that elapsed between approaches the satellites had moved, resulting in different geometry. Also the second approach was flown on a reciprocal course so any obstructions to satellite signals had also changed, including any that might have been caused by aircraft structure. The best guess from the available information is that the box behaved as designed and that WAAS simply was not sufficiently available for vertical guidance.

Quizzing the Quiz
A couple items from your February Quiz puzzle me. In question 4 about the IFR procedure to depart from a runway with no ODP, you said the answer was (c) but I think it should be (d), straight to 400 AGL then on course. The explanation to question 6 about the obstacles listed in the specific runway takeoff minimums leaves me confused about the “200 feet” qualifier. If the obstructions are in that flight path, wouldn’t that require a higher, safe, climb gradient?

Yeah, we goofed in layout on #4, whose correct answer is (d). We got the letter wrong; the explanation stands. Thanks for catching that.
In question #6, the Low Close In Obstacles (within 1 NM) that could require a higher than normal climb gradient but only within 200 AGL are listed but do not factor into the required climb gradient for the departure.

In March’s quiz about runway lighting, question 5 said, “DA/MDA adjustments from the inoperative lighting component table only apply to approaches flown between sunset and sunrise.” Your answer says this is false, which it is, but for the wrong reasoning.

Only visibility requirements are adjusted for inoperative systems, never the DA/MDA.

…an inside source at the FAA
Oklahoma City, Oklahoma

Thanks for catching that. You’re right, of course.

The Ol’ Switcheroo. Again.
In the March issue, in response to Steve Wagner’s letter, you talk about the VMC requirements needed to terminate an IAP into one airport and switch over to a nearby one. I have never done this, but it could be handy. My airplane is based at privately owned AeroCountry (T31), west of McKinney TX. We have no approaches. The nearest approach is to Collin County Regional (KTKI), 8 miles east.

I think it would be legal to fly an approach to KTKI, and request a Special VFR to transition out of the class D once below the ceiling. The clearance requirements for SVFR are simply 1 mile visibility and clear of clouds—the same as in class G. Once clear of the KTKI class D, as long as I stay at or below 700 feet AGL class G limit, and well away from the 2000 foot tower, I can get to T31 while VFR. The margin is slim, but as far as I can tell, it’s legal.

Legal? Yes. Smart? Well, only you can decide. If the visibility under the overcast is unlimited and if you know the terrain well, it may be an acceptable risk. If not one or the other, well, taxis are cheaper than funerals. Also consider, though, that this whole setup sounds a lot like the links in a chain leading up to an accident.

If you’ve got something to say to us, we want to hear it. Send your letters, hopes, fears, complaints and questions to IFR@BelvoirPubs.com. Please include your full name and location.