During my time as a controller, I’ve had a lot of pilots ask about what’s involved with ATC training and how it compares to pilot training. Unlike for some pilots, it’s not one and done, nor should it be.

ATC has many different functions and jobs. Most pilots know of the main facilities like Tower, Radar, and Center, but included in those are a variety of different tasks. A center can have as many as 20 different sectors, with 10-20 controllers working each. A slow tower can be staffed by only one person.

The skills needed vary by workload and complexity, and are not skills you can pick up overnight. Every position has its own rules based in the 7110.65, which then follow regional rules, and finally local rules, regs, and agreements. Controllers don’t just memorize the rules, but learn the application of them, and the good decision making required for safe operations.

Getting In the Door

Like pilot training, ATC training has several different paths. Your ability to solve problems, math, and spatial orientation plays a big role in your success in ATC. Each path requires a lot of sacrifice, study, and practice. The two main ways to get on the path are through the FAA Air Traffic Academy or through the military. Some other paths include Collegiate Training Initiative (CTI) programs through collages. I took the military path.

Getting hired with zero experience is possible and involves having a good record, having at least two years of previous employment, no bad run-ins with the law, and being at least 18 years old, while applying to a bid before reaching 31. That’s just to apply. Assuming you survive the 6-12 month hiring process and get accepted, you head to the FAA academy for a few months of ATC school.

The military route involves little more than just applying for the job. One must have served at least four to six years active duty, depending on in which branch they served. After the usual initial military training, you are sent to “Tech School” or “A-School” or whatever your branch calls it.

This training is generally two to three months and is approved by the FAA. It covers a lot of what is taught in the FAA academy. My military ATC training was about three and a half months of basic fundamentals and Tower and Radar training using simulators.

Once in their ATC training, either directly to the FAA academy or the military tech school, trainees can “wash out.” Trainees are constantly tested and after a certain number of failures, they are removed. Getting in the door and staying in the door are two separate things. Those who wash out in the military generally do not have another chance to reapply to the Air Traffic career field (in the military). On the civilian side, you can re-apply and potentially get another chance. If the trainee survives the equivalent of drinking from a fire hose, they go to their first facility.

When controllers get to their first facility, they are absorbed into the ranks as a “developmental” in the FAA and “trainee” in the military. The FAA will sort who goes where based on the applicant’s scores at the academy. Those with higher scores sometimes get to pick their facility.

In the military, trainees are generally sent to fill a need first, then spread out after that. Trainees are also sorted at locations with a Tower and Radar. My first facility had Tower and RAPCON (radar approach control) and I was sent to Tower. At the facility, trainees start “front-load training.” This training is specific to that facility with local-area knowledge that the applicant must learn before even going into live training. That can take a couple months in a Tower and up to a year for Radar/ARTCC.

Upon passing all required knowledge tests, applicants enter simulator training (at most facilities) to introduce them to the more live environment while having complete control of it. Simulator training can be a good tool if used correctly. Applicants go through a series of scenarios to see how they will react to an air traffic environment, and just like before, it’s test after test.

If one fails several scenarios, they are placed in some form of skill training to focus on deficiencies, then try those scenarios again. If they fail a second time, it will be determined by those in charge whether the trainee continues with a third chance or is removed. After a passing grade, trainees are then placed into live on-the-job Training (OJT).

Facilities have multiple control positions. In Tower, we have Ground, Clearance/Flight Data, Local (Tower), Local 2 (busier places), and Controller in Charge (CIC). In a Radar or ARTCC, positions for each of up to 15-20 sectors are D-side (data controller who coordinates with surrounding facilities for the R-side), and R-side who is working the live traffic in close coordination with the D-side.

These two controllers sit side by side. There is also clearance delivery in those facilities that handle many non-towered airports within their airspace. Suffice it to say, there are plenty of jobs in one room. A trainee (or developmental) must train a specified time in each position, one at a time. The trainee should be certified within a specified max time, but those are often extended a bit to help those who need it.

Every training session ends with a detailed assessment. Trainees are graded on many things. Trainers and management look for trends. Is the trainee getting better or worse? What kind of specialized help can be offered? Are there systemic weaknesses? This data helps determine if additional training could help.

Of course, too many poor reports and the trainee is out. Normally after enough good reports, the trainee is observed for certification by the equivalent of a DPE. There isn’t a separate oral, but they can ask you questions while you work. Assuming all goes well, trainees will certify on one position after another. Obtain all certifications for an area or sector and you are facility qualified. It’s far from over though. 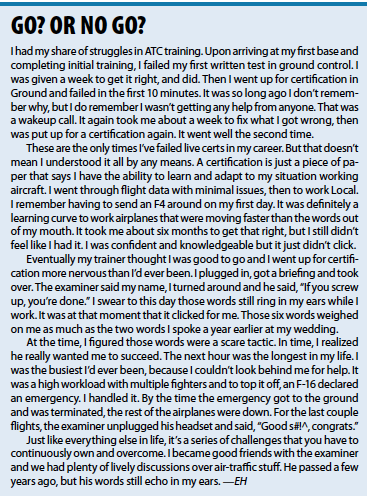 Once trainees become facility certified, they are “certified professional controllers” or CPC in the FAA, or “rated” in the military. CPCs will work any needed position. Of course, they’re never done; there’s always more hard work and refresher training. After a few months, CPCs go to trainer school so they can start training others. This is where “keeping your ratings” comes most into play. Sometimes, you have no idea of a trainee’s background or skills. Significant uncorrected trainee mistakes are the trainer’s fault and could cost the trainer their certification.

CPCs are also evaluated annually to make sure skills aren’t slipping. They usually just watch you for an hour or so. After the session they’ll give you feedback on what they saw. Lacking a serious error, it’s just little things here and there. In addition to working a control position, controllers have endless CBTs (Computer Based Training). They range from facility security to refreshers on the 7110.65 and local procedures.

As one progresses through their ATC career, they are given more responsibilities like Controller in Charge (CIC) or Watch Supervisor (WS). These positions don’t work live traffic but are supervisory, answering phone calls, running the operation, monitoring the facility or area of operation, and are most important during emergencies. It is a great responsibility. If something goes wrong, they are generally the first to take a disciplinary punch. Within certain areas, this is the highest a controller can progress without entering management.

A CPC might have an opportunity to transfer to a different location at their request. In both the civilian and military side, it’s simply a matter of paperwork to make the request. Actually getting there quickly can be a different story. It could take years to actually get “picked up” at your requested facility. You could put in for several different facilities to hopefully get picked up sooner, but it can still take a long time.

After a controller gets the desired transfer, they start from the beginning in facility training. Of course, a controller working in the same type of facility should have the needed basics. For example, the same principles apply to a Tower controller moving to another Tower, but with different rules for a different location. On another hand, if a Tower controller went to a Radar or ARTCC with no radar experience, it truly is starting from square one.

Radar and ARTCC facility controllers generally don’t really transfer to Tower in the civilian world because of pay. It’s not uncommon, though, for a controller from a Radar/ARTCC to return to their previous facility if they wash out at the new one. Sometimes, the work to learn a new facility is more than people are willing to devote. Thus, they remove themselves from training—or are removed—and sent back to their previous facility.

Starting from zero experience can be quite challenging but isn’t impossible. Of course, in human nature you always find someone who does the least possible to get by, and this profession is no exception. But, the best thing for anyone in ATC training is to learn the job and do it the best they can with a humble attitude—and this is most trainees and controllers. Having people’s lives in one’s hands means paying attention and wanting to do a good job. Otherwise, aircraft get too close to one another.

Believe it or not, I know several pilots who love flying, but ended up taking the path to ATC for a better quality of life, and to be home most nights. Most of them are good controllers. Just like controllers who are pilots and fly when they are not working, pilots who become controllers bring a very different perspective to the control room. That perspective has saved many lives. Hypothetically speaking, think you could do it?