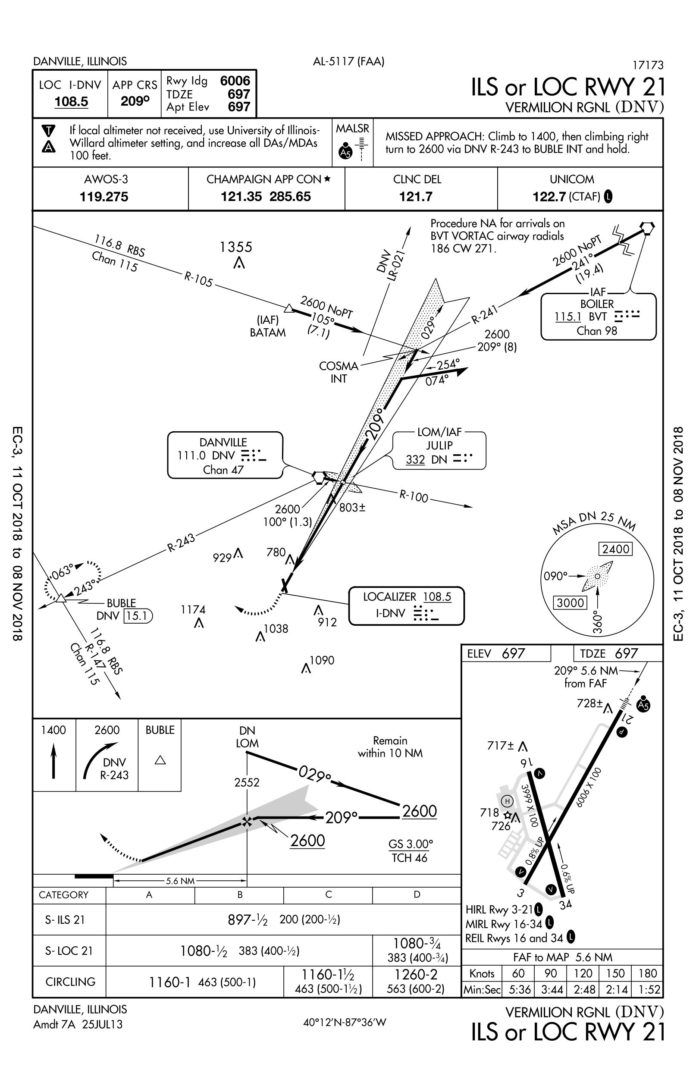 Some years ago, I was flying with a pilot in his Cessna. He was instrument rated, while I was working on mine. I watched him enjoying the two perfectly centered needles (old-style CDIs) accompanying the six-pack panel while flying to a VOR at 6000 feet. He remarked with a sigh of contentment, “Now this is the way to fly.” It sure was, especially for me, when I was building time in budget-friendly trainers where dual (working) CDIs was a luxury.

A couple years later, I was flying with this same pilot in his newer, faster Mooney, equipped with a nice HSI coupled to a Garmin GNS 430. While en route to an RNAV fix, he remarked with that same sigh of contentment, “Now this is the way to fly.” Funny how our likes and dislikes can swap ends. This brings us to our latest Clinic: Which approach are you gonna fly?

Danville, Illinois, is 400-1 today, which happens to be the day you’re due there to pick up a colleague who’s delivering a six-pack-only Skylane with dual nav indicators to a new owner. You’re flying your own six-pack Cirrus SR22, but you’ve also got two certified GPS units feeding dual nav heads. Since you’re both equipped for precision approaches, today’s weather should be enough.

You’re both a “go” since the gray, misty clouds lie beneath a calm weather system and the tops are around 6000 feet with temps comfortably above freezing. The only thing to really think about is wind, blowing from the southwest at 12 knots, gusting to nearly 20, so everyone agrees to use the longest and most suitable runway—that’ll be KDNV’s Runway 21 at 6006 feet long.

Skylane One, we’ll call it, with legacy equipment, will get vectors to the ILS 21. You, flying Cirrus Two, are all set for the RNAV 21. In fact, your flight planning is so quick that you depart 20 minutes ahead of Skylane One. Off you go with a laptop and a candy bar, reminding your friend with a grin that you’ll be sitting at the airport waiting. You always fly LPV procedures and just get direct to the straight-in initial fix. No vectoring for you!

Now for the approaches. The ILS 21 is quite the jumble at first glance. The pilot first looks for the initial approach fixes to get started untangling the busy plan view. There’s BATAM to the northwest, but he’d rather avoid that due to the 104-degree turn at COSMA that will require some careful planning to make the turn. (The 021-degree lead radial from DNV is designed to give six-pack pilots a two-mile alert of the sharp turn ahead.)

Further northeast is the Boiler VOR, from which you also go direct to COSMA but at a much friendlier angle. This is one way in for Skylane One, although a bit out of the way for an arrival from the northwest. The only other way in is the transition from the DNV VOR to the IAF at the outer marker/final fix JULIP, which requires him to fly the course reversal that he’d like to avoid.

In any case, vectors from Champaign Approach are likely, but Skylane One should keep the relevant fixes ready in case of problems. And as backups, the pilot must keep those CDIs tuned and ready if he wants to identify JULIP or the missed approach fix, BUBLE. After all that familiarization, it comes down to a typical ILS down to 200-1/2.

Meanwhile, Cirrus Two’s RNAV 21 is way simpler. It does away with vectors and offers a Y-shaped initial approach from two fixes. It’s unlikely you’ll need the holding course reversal at COSMA and from any northerly heading that’ll be a straight-in anyway. The missed approach procedure is a no-brainer: Fly runway heading, then “climb to 2300 direct ATULE and hold.” Your GPS will even fly the entry and hold for you.

This is what you look forward to while basking in the sun at 9000 feet, enjoying your perfectly centered needles. You’ve throttled back, yet speeding along at 160 knots (a lot faster than Skylane One). You’re cleared direct COSMA and the GPS is making life on the LPV grand. This is the life, isn’t it … isn’t it?

Well, the one catch to this LPV is that minimums are 100 feet higher than the ILS, and with the Danville ceiling still at 400 feet, you have to admit you have a better chance of going missed than Skylane One. Will that ceiling hold steady? If not, do you give it one attempt and switch to the ILS if you miss? Or maybe you keep heading for COSMA and just plan on using the ILS approach right off?

The last weather check bursts the bubble five minutes from COSMA. It’s deteriorated to 300 feet broken. The DA is 990 feet (293 AGL), so the math says you can still get in, but the odds of success are down to seven feet. You’re cleared for the RNAV approach, it’s 30 seconds to COSMA and you’re programmed to make the turn, intercept final, and descend to 2600 feet.

At 1000 feet you’re missing. The lead-in lights were in view, but nothing else—no PAPI, no threshold lights, nothing that meets landing requirements in 91.175. Sure, with those lead-in lights in view you could descend to 100 feet above the touchdown zone, but you didn’t feel you should push things to the absolute limit today.

Climbing on runway heading, you buy some time to reprogram for the ILS by asking Champaign to point you towards COSMA. Sure thing. Approach is more than willing to swing you back around, after Cessna traffic on the ILS lands and closes. Skylane One will be waiting for you, which just goes to show that procedures, not panels, can make the difference between getting there fast or getting there eventually.

Elaine Kauh is a CFII in eastern Wisconsin. She suspects she holds the state speed record for slowest ILS approach, flown in a Cessna 152 at a groundspeed of 50 knots.