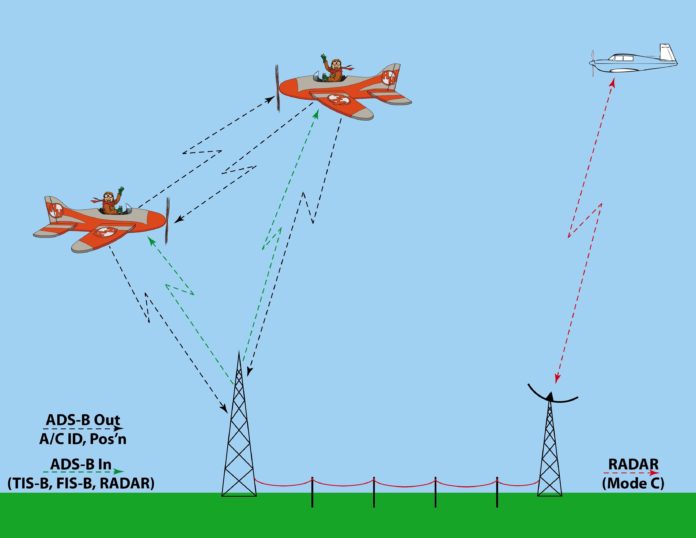 Recently I attended an AOPA Safety Foundation seminar about weather accidents. One big take-away for me was that a large number of the attendees, perhaps the majority, don’t understand ADS-B (which came up, but had nothing to do with the seminar). So, although we’ve run countless articles on various aspects of ADS-B, I felt a responsibility to go over the basics.

I’m going to gloss over some of the details, but this general discussion should prove helpful if you don’t yet quite understand ADS-B.

Alaska remains a vast land where one can still go hundreds of miles without encountering any sign of civilization. ATC radar coverage is lacking. When GPS was in its infancy, engineers reasoned that they could skip radar’s massive infrastructure but know precisely where aircraft were—each aircraft could individually know that from GPS and just communicate that with others and with ATC. ADS-B was born.

Today, ADS-B encompasses a number of individual capabilities, both originated by the aircraft themselves, and others that come from the ground. Confusingly, we name all that “ADS-B” but also name some of the pieces individually. I’ll be precise in using names.

All the nuances notwithstanding, with ADS-B an aircraft simply transmits its GPS-determined position and ATC and other aircraft can receive that position. In an all-ADS-B world, ATC wouldn’t even need radar. The rest of what we call ADS-B is simply a couple enhancements.

Okay, you have basic ADS-B position-reporting as described above. That’s come to be known as ADS-B Out and is all that’s mandated for the 2020 deadline. Let’s take a shallow dive into how that works.

You already have a transponder that transmits a dumb and blind signal in response to interrogation from other sources. Well, it’s not entirely “dumb” in that you can enter a four-digit base-eight (no 8s or 9s) code on the instrument and when the transponder responds to an interrogation, it puts that code and even your present altitude (to the nearest 100 feet) onto its outgoing signal. ADS-B Out keeps that but takes it a bit further.

ADS-B Out adds a unique ID or serial number for your aircraft, and your GPS-determined position. Now, if you’re following along, you might think that the ATC-assigned transponder code is somewhat redundant if you’ve got a unique identifier that’s always transmitted anyway. You’d be right. But for now, they’re both in use.

I’ll come back to this in more detail, but let’s for now say that ADS-B aircraft can also receive and display the position-reporting data from other ADS-B aircraft.

Here’s an over-simplified example of how ADS-B position reporting works. Say you’re landing at an airport that is at the confluence of two mountain valleys. You, in your ADS-B-equipped aircraft, are coming down one valley, and another ADS-B-equipped aircraft is coming down the other valley. You’re both approaching the same airport, but you can’t see each other and the mountain in between blocks all radio signals between you.

But, the FAA has anticipated this and wisely installed a ground station at the airport. That ground station is positioned such that it can send and receive radio signals to/from both aircraft, in both valleys. That ground station has multiple purposes. First, it receives all the ADS-B position reports from aircraft and sends them to the controllers. Thus, ATC gets accurate position information without the expense of radar.

A couple paragraphs back I asked you to assume that each aircraft could also receive position-reporting data from the other. That’s not a given and isn’t part of the 2020 mandate. Think of it as an optional extra feature.

The term, ADS-B In, is confusing because there are multiple disparate kinds of information that one can receive (get “In”). So I won’t use it any more. Receiving the traffic information as described above is called “Traffic Information System-Broadcast” or simply TIS-B. TIS-B allows you to receive position information from other aircraft, and even aircraft that you can’t see because ATC ground stations are retransmitting the position information. But, since we don’t all have ADS-B yet, the FAA wisely also includes in that TIS-B transmission from that ground station, data on aircraft that it has on radar, but not via ADS-B.

To illustrate say there’s a third aircraft that’s not ADS-B equipped. It’s above the mountains and is visible to ATC radar. You wouldn’t know about it; the second aircraft wouldn’t know about it. But, ATC sees it on radar. So, ATC translates that radar information to TIS-B and sends it out over that ground station. Now, you and the other aircraft can see the third.

That’s TIS-B. Sure, there are more technical details and nuances, like proximity where you can’t see traffic very far away, but those are all little things that you don’t really need for the big picture as you explore your need to equip for the mandate.

There’s one more piece to this system. The FAA really likes ADS-B as described here, but there’s little in it for the average Joe Pilot. Sure, it gives us more traffic information and lets us say cool (okay, dumb) things on the radio like, “Got ’em on the fish finder.” But the FAA didn’t think that would truly be enough inducement to get us to jump on the ADS-B bandwagon. So, they added one more optional, useful feature to soften the blow.

Flight Information System-Broadcast or FIS-B has absolutely nothing to do with the underlying ADS-B concepts, other than it’s a completely separate feature that they’ve added to the system technology.

We’ve long been able to subscribe to commercial in-flight satellite weather services like SiriusXM. These services provide a wide range of near-current weather information that ranges from NEXRAD radar feeds to METARs and TAFs, with a lot in between.

FIS-B, as a component of the complete ADS-B system, is a competing FAA datalink weather service, similar to what you’ve been getting from the commercial sources.

Those commercial sources will point out a big limitation of FIS-B: It’s ground based. The FIS-B data is transmitted from those same ADS-B ground stations we discussed above. Thus, it’s unlikely you can receive that information on the ground. The FAA counters, however, that once airborne at a few thousand feet AGL, you’ll be able to receive FIS-B in most parts of the country. This is real and you’ll have to decide for yourself if it matters. See the sidebar.

The commercial datalink weather sources also point out that they have some products the FAA doesn’t, and in some cases shorter delays in transmission. I consider these just normal competitive claims and that none is a clear leader, given the subscription cost of the commercial services versus the zero cost of FIS-B data (once you’re equipped, of course).

Probably the biggest argument that commercial weather services use to compete with free FIS-B is that they are satellite-based and you should be able to receive it virtually anywhere on the ground or in flight. This compares with FIS-B from the FAA that is broadcast from ground stations, meaning you seldom receive the information when on the ground and usually must be at least a few thousand feet above the ground. Does that matter?

Right off the bat, I’ll grant that getting weather on the ground is desirable. But, is it a meaningfully practical difference? I’ll say it’s not; here’s why.

When you’re on the ground, you need access to weather when you’re flight planning, but that’ll usually come over the Internet. In-aircraft weather is most useful in monitoring your progress and looking ahead for any developing troubles—all done when airborne. The only time updated weather on the ground seems critical is if there’s a storm on departure.

I’ve been in that situation exactly once in over 7500 hours of flight. I was preparing for departure, and a large cell was ominously moving right through our intended path. With on-board weather radar I could see that the bulk of the cell had moved on, and a 15-degree further turn for my initial heading would avoid it. I asked for that, got it, and it worked fine.

Could I have used data link? Sure. But this was a rapidly-moving (and rapidly developing) system, and by the time uplinked NEXRAD showed it to be safe, it might have been long enough for another cell to have developed. So, data-link delays make that on-the-ground scenario a non-starter. I’ll say the same for the departure phase until I was high enough to get FIS-B, at which point the advantage is lost.

It’s the same thing on descent. If you’re low enough on final approach that you can’t get FIS-B, should you really be relying on delayed data from any source? I’d argue that you should have already made those decisions based on information you had earlier and high enough to get FIS-B.

So, while it would be nice to have data-link weather on the ground, I don’t believe not having it is a meaningful shortcoming. So, for me, the free data-link service more than makes up for the possible slight disadvantage of a lack of coverage down low. —FB

This article is appearing in the February 2019 issue. Say you’re reading it on February 1. You have only 11 months to comply with the mandate for ADS-B. Given that most good shops are now scheduling installation work many months in advance, it might be already too late for some shops.

As I’ve discussed, all you’re required to have is ADS-B Out. This can be obtained by a new transponder that offers ADS-B Out (at any altitude), or by a separate box (typically, below 18,000 feet only). ADS-B Out requires a WAAS GPS source, so if you don’t have a WAAS navigator already, you might consider that as a coincident upgrade, or simply get one of the ADS-B boxes that include a WAAS GPS position source. Whatever you put in must be permanent and approved—portables don’t meet the requirement.

For the in-for-a-penny-in-for-a-pound crowd, the two additional optional pieces of ADS-B are worth considering. While they’re two separate services, if you have the equipment to get one, you almost always get the other along for the ride.

TIS-B and FIS-B require a receiver and a means to display the information. Cheapest, of course, is a portable solution, which you can use since these are optional services. The two receiver functions are usually combined in the same box and you can use your tablet as the display. For an all-in panel-mount solution, you’ll need that receiver, often part of an ADS-B transponder you might choose, and some means of display, such as an MFD or even the display on your navigator.

Whatever solution you choose, you need to get started right now. Take this article as a starting point, visit a shop you trust, and further discuss the options with them. You might be able to get away with only spending a thousand or two, or, like many of us, you might opt for a whole panel upgrade costing many tens of thousands. Either way, 2020 is close. Start now.

Frank Bowlin, thinking he was ahead of the curve, equipped with ADS-B Out many years ago. Instead, he missed being able to get the developing FIS-B. So, now, he’s got to do it all over again to include FIS-B this time.