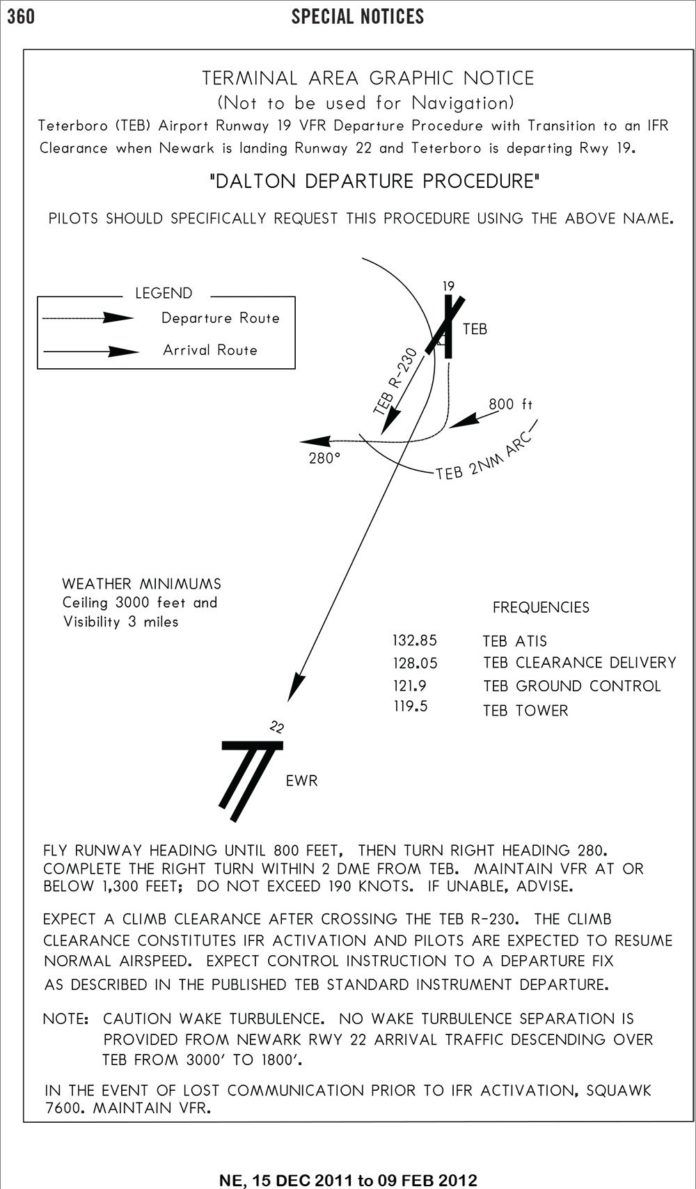 An item recently crossed our desks that has caused some head scratching: Teterboro had a revised charted visual departure procedure for IFR clearances. Of course, everyone knows about SIDs—we’ve analyzed bunches of ’em in these pages over the years. And most of us will occasionally ask for a VFR departure. Visual approaches (charted or not) are common.

But the FAA also has formal, charted procedures that are part of an IFR clearance but must be flown in visual conditions, just like there are charted visual approach procedures. Makes sense.

VFR Procedure Review
Before we dig into this procedure, let’s do a quick, general review of a few common visual procedures we get in IFR flying. We’ll start with a VFR departure. ATC usually won’t offer it to you, but you can request it typically to either allow you to get out of a busy airport ahead of IFR departures, or just to avoid a wonky obstacle or charted departure procedure.

Once you think a VFR departure might be helpful, be sure you can maintain

VMC before you ask for it. Then, just request your clearance, adding something clever like, “Requesting a VFR departure.” Your IFR clearance will be the same you’re used to, but there will be a VFR clearance limit included. It might go something like this: “Cleared to HomeDrome as filed. Climb VFR to 9000. Climb and maintain 11,000,” or “Cleared to HomeDrome as filed. Maintain VFR until crossing SAAFE. Climb and maintain 11,000.” Note that unless the controller gives you specific route changes, the routing clearance is unchanged by the VFR clearance segment.

Just like the VFR departure that you have to request, you can request a visual approach. ATC can only assign you a visual approach if the field is VFR and bases are high enough above their MVAs (so the exact requirement varies airport-to-airport). Either way, you can prompt them once you’re within about 30 miles of the airport by simply telling ATC you have the airport in sight and you’ll typically get a visual approach. Again, it’s your responsibility to maintain VMC and, once cleared, terrain and traffic separation as well.

Once cleared, you’re expected to proceed directly to the airport and land on the assigned runway, if designated, or the wind-suitable runway if none is assigned. (No 45-degree entry to downwind required; just set yourself up to directly enter the traffic-pattern leg that is most appropriate for your location. If it’s a busy GA airport with a lot of VFR traffic and you think it best to use that 45 entry, just tell the controller or even cancel IFR.) You may be given speed or altitude assignments that you must follow: “Maintain 120 knots or more until joining final. Join final at or above 3000 feet. Cleared visual approach Runway 27.”

Charted Visual Departures
Where do you find charted visual approach procedures? Good question. The FAA has decided to hide them in the Special Notices section at the back of A/FDs. This is an unfortunate choice, as not many folks using FAA publications are likely to dig that far to find these useful procedures. Plus, the FAA depiction of these is somewhat crude, not up to the quality of other IFR charting products, and can be difficult to follow. Jepp wisely puts them at the front of the 10-3 departure procedures and uses all the standard chart symbology, making them much easier to follow.

Just like charted visual approaches, these charted departures exist to serve a specific purpose—usually routing to avoid certain terrain, sensitive areas or busy traffic corridors. The close proximity of the busy Teterboro GA airport to the absurdly high volume of airline service into Newark is the reason for the Dalton Departure. TEB lies 11 miles northeast of EWR, so things can get interesting trying to thread southwest departures from TEB between southwest arrivals into EWR. This procedure offers a tested plan to thread that needle.

First, like most VFR procedures on instrument clearances, the pilot must request these visual departures. They also carry their own weather minima, in this case 3000-3. If you request and are cleared to fly the procedure, be sure to meet all the restrictions or inform ATC that you cannot.

Note that in addition to rather strict routing requirements (“Fly runway heading until 800 feet then turn RIGHT heading 280. Complete the RIGHT turn within TEB 2 DME”), the Dalton specifies a low 1300-foot altitude restriction plus a 190-knot speed limit. A lost comm procedure is also specified.

Full-Route VFR?
With all these visual procedures for instrument clearances, it’s theoretically possible to fly from your departure to your destination while expected to maintain VMC for the entire flight.

Whether you’d want to or not, or whether you’d even bother filing IFR for such a potential flight, is up to you. But it’s nice to know that charted visual departure procedures are included in that toolbox.