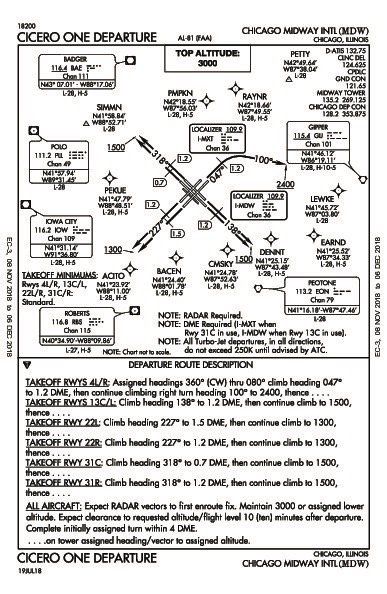 Our February 2018 clinic (“Chicago’s Scenic Route”) discussing a particular procedure at Chicago Midway International led to some reader mail about what should happen. The Midway Three departure for Runways 4L and 4R, if interpreted on its face, would have indeed involved extra maneuvering just after takeoff, as we discussed. It has since been noted that this DP calls for a more logical sequence of steps to make it work. So we went back to take another look at the Midway Three along with the other DPs published there. The charts have since been updated a little to clarify when, where, and how high to go.

Let’s go back to the west-side GA ramp at Midway in a single-engine aircraft with RNAV. We’ll get a departure clearance from Runway 4L. The desired course is to head northwest to the Polo VORTAC and the filed altitude is 10,000 feet, with the final destination of Cedar Rapids, Iowa. We know that due to the runway assignment, we’ll be heading away from Polo initially. The southern boundary of O’Hare’s inner airspace lies minutes away, so the mission is to fly the proper headings and altitudes to avoid traffic, avoid the Class B, and clear the obstacles until getting cleared to proceed on course.

The DP in use is the Midway Three, which said if you’re taking off from Runways 4L/4R, those “assigned headings of 360˚ (CW) thru 80˚” will have a “climbing right turn to 2400 heading 100˚ before proceeding on course” and getting your next heading. If we were to follow this in the sequence as written, we’d take a left turn to a north/northeast heading after takeoff, followed by that “climbing right turn” to 100˚ to 2400 feet. This would indeed head toward O’Hare, and unnecessarily at that. So to follow the procedure, we’ll first follow the instructions to turn right to 100 degrees and climb to 2400 feet, then turn to the heading assigned by ATC.

We can confirm this by looking at a couple of additional elements in the published notes. The furthest north you can go is marked on the plan view by a boundary defined by the 96-degree radial of the DuPage VOR. This is for aircraft without DME, as noted in the text. For those with DME, or the RNAV equivalent, as in our example, the text says to turn within 4 DME of the appropriate ILS localizer.

The plan view depicts a right turn from Runway 4L and 4R to 100 degrees. Also, the notes for takeoff minimums and departure procedures simply state that this is how it would be flown for Runways 4L and 4R: “Climbing right turn to 2400 heading 100˚ before proceeding on course.” That’s it. In fact, the other runways listed there also have instructions to climb on runway heading to a given altitude prior to turning.

MDW Four vs. Cicero One

Over the summer the Midway Three got an update and new title, Midway Four. It’s similar to the previous version but with a couple of minor wording changes. For takeoffs using 4L or 4R, the instructions are the same, except the words “Northbound departures” are removed. They added 100 feet to the initial altitude for Runways 13C/13L (it’s now 1500 feet) and the note “Top altitude: 3000” now appears on the chart, prominently displayed.

The departure instructions from 4L/4R remain the same, and when we get an ATC clearance on the ramp, we’ll be told to fly the Midway Four departure followed by our assigned heading, followed by “expect 10,000 10 minutes after departure.” This gives us the actual steps to follow and further clarifies the textual description.

Midway has another departure procedure available from Runways 4L and 4R that achieves the same result. Take a look at the Cicero One and the instructions are similar except that you essentially fly runway heading to 1.2 DME, “then continue climbing right turn heading 100˚ to 2400…” and then to the assigned heading. The pictorial view of this chart more clearly shows the point at which to start the turn eastbound, while the Midway Four does not.

This is a key point. Getting past the departure ends of the runways before making any turns isn’t an issue for jets that dominate the traffic at Midway, but it could be a big deal in our piston. Imagine taking off from Runway 4L, a 5500-foot runway. Given your short takeoff run (say 800 feet on a good day), slow groundspeed (surely less than 130 knots) and a good climb rate (1500 fpm on a good day), you could very well be high enough to begin your first turn while still over the runway. That could put you dangerously close to 31R, or traffic using the downwind leg for that runway, or someplace you’re not expected to be.

Now we’ve got a departure route that achieves all the requirements: obstacle clearance, airspace clearance, and traffic separation. These two clinics amply illustrate that having the big picture before zooming in on a particular detail is the safest way to prepare for a complex situation. Fixation isn’t a good thing, whether flying an armchair or flying for real.

Elaine Kauh is a CFII in eastern Wisconsin, where she has enjoyed the winter flying approaches in non-DME-equipped aircraft.