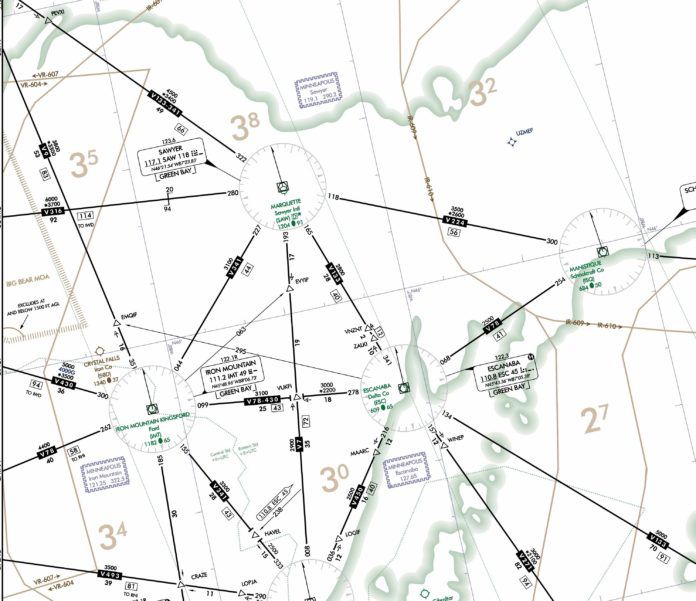 For those unfamiliar, the Upper Peninsula of Michigan boasts generous lengths of shoreline off Lake Superior, scenic byways, and lots of trees. While it can be a winter wonderland during the off-season, it’s not unusual to have many days of dreary gray skies and fog that wears away the most sanguine spirit. It’s the kind of weather that gets us burning through a whole morning figuring out how to get out, around and back without getting stuck who-knows-where. Welcome to the UP.

All In the Timing

Today’s flight plan starts from home base at Sawyer, Michigan (KSAW) with a quick turn at Iron Mountain, Michigan (KIMT) to pick up a passenger and take her to Appleton, Wisconsin. This flight is a short one, just 43 NM for the first leg down V341 to KIMT, then 95 NM (under an hour in your glass-pack piston) to go from there direct to KATW. Since it would take twice as long to drive from Iron Mountain to Appleton, flying is the first choice.

From Appleton you’re going to fly straight home to Sawyer, another hour. Your goal is to start the whole trip by 10 a.m. and be in Appleton two hours later, then head back after a nice lunch. You awoke at dawn to an overcast morning, so you know there’s some weather to analyze, plus a chance you’ll not make the flight as you need to return on time. Whether you launch or not, you’ll end up spending a good hour-plus just on the planning—not including the drive to the hangar, the preflight, and so on. It’s nearly 8 a.m., so time to brief, starting with KSAW’s METAR.

That’s one big red flag. Still wanna go? First consider what you need for takeoff. Your longtime default has been to use published approach minimums, because you want to be able to get back in if there’s a problem. There’s an ILS Rwy 01 and LPVs to both 01 and your planned departure runway, 19, all with suitable ceiling and visibility minimums.

To be comfortable you want a notch higher for both vis and ceilings. The airport’s terminal forecast calls for this to improve as the day goes on, so it looks like this will all work. From 18Z (1 p.m. local), it warms up and the winds will remain southwest around 10 knots, shifting more to the south as it goes to 1/2SM in fog, ceiling broken at 200 feet. An hour later, it goes to 4SM in mist and 800 overcast, then breaking up to 2000 scattered after 5 p.m. It should be good coming back mid-afternoon.

Why not just wait to depart? Well, you’re on a schedule. But you know it’s best not to launch simply due to time pressure, so you also tell yourself it’s best to be back before it gets dark. You don’t like flying over nuthin’ but trees at night, in winter, in weather. And there comes a point in the day at which your passenger could be driving, with a limited window to make that work. Anyway, your convenience aside, the second question is: Which is safer—night VMC back to Sawyer, or day IMC?

While you ponder that as you pour yourself another cup of coffee, you check the weather at Iron Mountain, and find that the conditions are better:

So the LNAV to Runway 19 will work, and you prefer it to the LOC/DME BC 19. Appleton has similar conditions and even more precision approaches. Still, alternates are required for both airports, so you check around for some. There’s Escanaba, Michigan, just 20 minutes to the east of KIMT. Weather there is currently at 1500-5, with conditions holding steady for a few hours—way more than you need. For Appleton, you can use Oshkosh just to the south, with 800-foot ceilings and precision approaches.

That was the easy part. Before you make the departure decision, the third big consideration lies in the en-route conditions. There are AIRMETs over upper Michigan for IFR in mist/fog and icing below 5000 feet, but none in Wisconsin. You’ll need, at the least, low tops to get out of the UP and get back in. Pilot reports from Escanaba indicate cloud layers from 800 to 2200 feet, and 6000 feet and above. Want to squeeze between layers en route and file for 4000 and 5000 feet? That should work.

Now back to Sawyer. If the common wisdom is to use approach minimums in case of a problem, what is a “problem?” There’s mechanical stuff like an engine gauge indicating a temperature or pressure problem, or a single instrument failure. There is, you figure for your bird, a low risk of engine failure or engine fire; you’re more leery of multiple instrument failures, with pitot-static and vacuum topping the list. The biggest risk today is ice in the climb. It might be best to keep climbing toward colder air or the lower tops, but there’s also risk of inability to climb quickly enough to escape.

Decision time. You can’t feasibly turn back to KSAW after takeoff, so you need what those in the know call a takeoff alternate. The closest field with good runways, approaches and decent weather is Escanaba, a few miles closer than Iron Mountain. If you do encounter ice, you can aim for the field, stay high, communicate intentions, and fly towards the VMC while having a very good shot at a visual approach. That marginal VFR you thought was way more than you need suddenly became just good enough.

At least for today, with one takeoff below minimums and one red flag for icing, you’re good enough to go. It’s great when a plan comes together.

Elaine Kauh is a CFII in eastern Wisconsin, where she often flies around to meet clients when it’s only 30 minutes longer than driving.