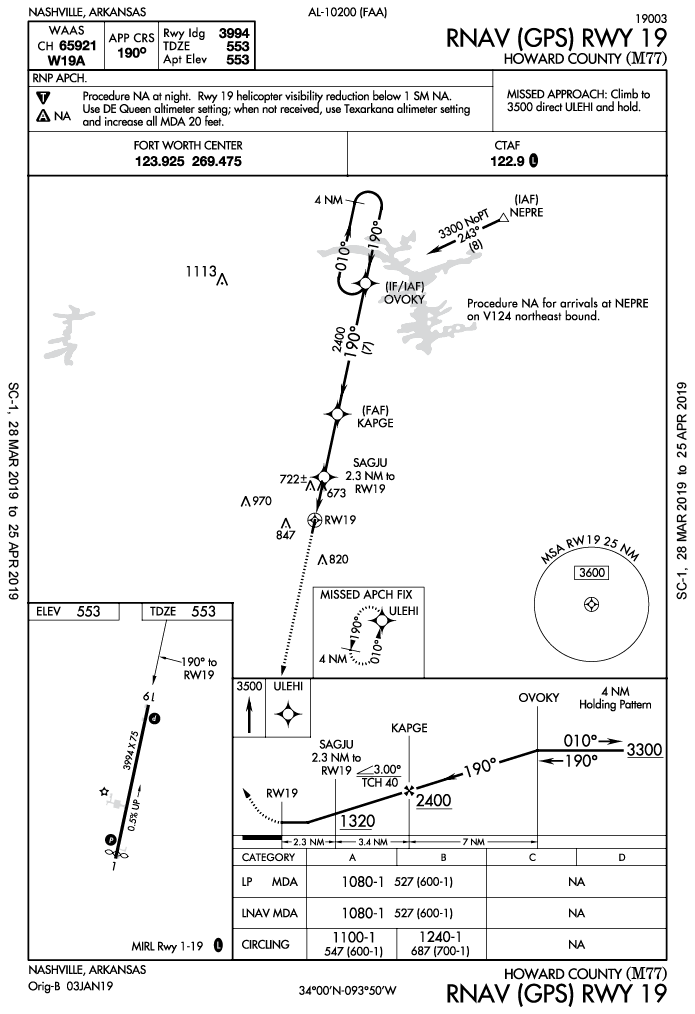 There are a few things in flying life we might take for granted. In fact, some of us are downright spoiled. For instance, flatlanders (like me) get 99.9 percent radar coverage in our mountain-free region, all taken for granted. Southerners take for granted their three seasons of comfortable flying. Those who fly to larger cities all the time definitely take for granted the big runways, ATC help, and all the information they need at their fingertips.

So if we were to plan a flight from Nashville to Atlanta, it would surely be southeastbound a couple hours from Tennessee to Georgia, with all the amenities from point A to B, right? Not this time. Our flight is from Nashville, Arkansas to Atlanta, Texas, and it’s only a 56-mile leg at that. We depart tomorrow morning, so let’s start planning.

The day’s rounds visiting new business clients start by departing Shreveport, Louisiana with legs to Nashville, Arkansas (M77) and then southwest to Atlanta, Texas (KATA) in your personal single-engine chariot. Since both destinations are new to you, a little research is required. The plan is to spend a couple hours each in Nashville and Atlanta, then head to Ada, Oklahoma for the night. Three states in a day. That’s why you prefer to travel via Cessna 182T.

That’s also why you’re capable of getting into and out of smaller airports like M77—a small facility compared to your home field. There, you’ve come to take stuff for granted, like runways over a mile long and ramp services. Nashville, AR, by contrast, is unattended; it says so right there in your EFB’s chart supplement data. The single runway, 01/19, though, is plenty good, just short of 4000 feet with standard-looking RNAV procedures to both ends.

So far you’re getting the details you need. You can pick up some 100LL at the next stop, Atlanta’s Hall-Miller Muni (which, by comparison, offers more with its “irregular” attendance and self-serve fuel.) There, the 3800-foot runway is still plenty long for the Skylane; even the 2262-foot turf strip would be just fine. Really, the biggest consideration will be procedures, or lack thereof. The two approaches listed, an NDB and RNAV, are both for Runway 5; there’s nothin’ for 23. Now that’s a new one.

You set that aside to get a handle on the full picture in case there’s anything else to hold you back. Turning to the EFB, you realize that your database is not only a couple of days out of date, it has Louisiana and Arkansas but not Texas or Oklahoma. Good catch.

While the additional charts are loading, you file the legs and get an outlook on weather. Typical for early summer, winds are forecast to be from the south and fairly steady at 25 knots. To make things even more sporting, there’s no weather station serving Nashville. You’ll have to glean some information from De Queen (28 NM to the west) along with the nearest TAF at Texarkana, more than 30 miles away. Winds aloft at 6000 feet will be southwesterly at 35 knots and cloud bases are forecast from 1100 to 1500 feet at KTXK through the day.

You’re so used to having at least an AWOS that you briefly reconsider the plan. Should you just land at Texarkana, right between the two airports and make the rounds by car? But your schedule requires flying to your stops. The wind patterns appear to be within five knots and five degrees for a hundred miles around, so you decide to stick to the plan.

The itinerary calls for two hours in Nashville, then direct Atlanta. How does one get that clearance from an unattended airport? What a luxury it was at home to have ATC on hand for all this. On your own, you could depart VFR and pick it up in the air. You know you’ll be back on with Fort Worth Center on 123.925, but how high do you have to be to reach them? Will 1500 feet work? Probably safer to call the Flight Service Clearance Delivery line and deal with a void time.

Still on plan. Now, it just so happens that Atlanta also has no weather. Its closest station is still Texarkana, and there’s not much else nearby. Oh yeah, and no approaches to the runway you want, requiring a circling approach from 5 to make Runway 23. At any rate, there will be a healthy crosswind on the intermediate approach leg and a robust tailwind on the final approach course, sending you on one heckuva left downwind for 23. Circling minimums will be 920 feet. Okay, you think you can do this—if it goes perfectly. But if you’re on a tight final to 23 and have to go around for whatever reason, what’s the plan of action? The missed approach course for Runway 5 is going the other way. We’ll see how this works out next month.

Elaine Kauh is a CFII in eastern Wisconsin. She’s been spoiled rotten by the Starbucks drive-thru on the way to the airport along with way too many cookies at the FBO.