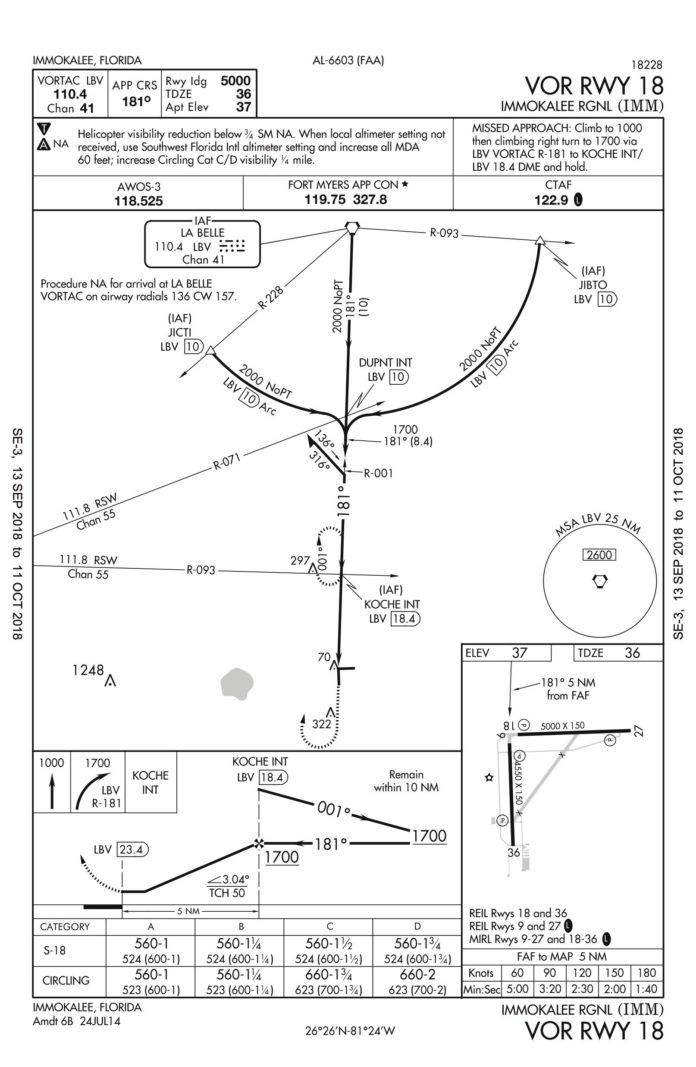 Of course, we all know the answers to the questions. Right? The title of the approach indicates what equipment is required to fly the final approach segment (FAS).

Since the late 90s, the FAA has allowed us to substitute an IFR GPS for DME or ADF (provided the fixes are in the GPS database). “ADF required” usually indicates that an ADF is required to fly a transition to an initial approach fix (IAF) or to fly the missed approach. (Got one? Does it work? Didn’t think so…) And likewise, an IFR GPS can be used in lieu of the ADF you don’t have.

Let’s connect some dots. In 1969, NARCO (now defunct) introduced the CLC-60 VORTAC Offset Control Panel that allowed navigation to a phantom fix defined as a distance and direction (“rho-theta”) from an existing VORTAC. It was touted as the first RNAV system. In the 80’s, Bendix/King’s KNS-80 Integrated Navigation System might be considered the first practical RNAV navigator (it had VOR, LOC, DME, RNAV, and GS). Like the CLC-60, it could electronically “move” a VORTAC and was IFR certified.

In the following decade, LORAN-C was adapted for aviation use and was widely adopted, albeit briefly, as an RNAV system available for general aviation VFR operations. There was even talk to allow LORAN-C for IFR operations, but that died with the emergence of GPS, which more readily lent itself to IFR operations.

Advisory Circular (AC) 90-108 “Use of Suitable Area Navigation (RNAV) Systems on Conventional Routes and Procedures” of March 3, 2011 (minor update in April 2015) clearly states on pages 5/6, “An otherwise suitable RNAV system cannot be used for the following:

“…b. Substitution on a final approach Segment (FAS). Substitution for the NAVAID (for example VOR or NDB) providing lateral guidance for the FAS.”

While the AC isn’t regulatory per se, operating contrary to its best practices might be considered violating 91.13 “Careless or Reckless Operation.”

“Use of a suitable RNAV system as a means to navigate on the final approach segment of an instrument approach procedure based on VOR, TACAN or NDB signal is allowable. The underlying NAVAID must be operational and the NAVAID monitored for the final approach course alignment.”

For our purposes, an IFR-approved GPS is a “suitable RNAV system.”

The AC says one thing but the AIM contradicts it. With the AIM being the most recent, it would seem reasonable that it supersedes the AC. But you should keep digging.

Fast forward to August 2018 at a little airshow in Oshkosh. Garmin was discussing the most recent software for its GTN navigators (Version 6.5). Since I have a GTN 750 and 650, I was looking forward to getting the new software. When it was installed, I was surprised to read new language in the Gamin GTN AFM supplement:

“When using VOR or ADF receiver to fly the final approach segment of a VOR or NDB approach, GPS may be the selected navigation source so long as the VOR or NDB station is operational and the signal is monitored for final approach segment alignment.” This says essentially the same thing as the AIM. Since the AFM Supplement is regulatory, I thought “overlay approaches are back.” But there are a few differences.

The underlying ground-based NAVAID must be operational, it must be monitored, and clearly the relevant avionics receiver must be functional. In the case of VOR, this shouldn’t be a problem; but it’s more of a problem for NDB approaches since working ADFs are uncommon.

Additionally, there is the need to “monitor” the VOR or NDB. Does that mean, listening to the audio identification? No, it’s more than that. We need to confirm final course alignment. For a VOR, there are two ways. In a glass PFD, tune the VOR and assign one of the bearing pointers to the VOR. In a round-dial panel, assign one of the VOR/LOC heads to the VOR. ADFs need a bearing pointer, either external or built in.

I’ve flown three VOR approaches using GPS on the final approach segment: Immokalee, Vero Beach, and Naples, all in Florida. I’ll discuss Immokalee airport (KIMM) in south-central Florida. Being in the middle of nowhere it gave me the flexibility to experiment.

KIMM has an RNAV (GPS) RWY 18 approach that can be flown to an LPV DA. Runway 18 also has a VOR approach using the La Belle (LBV) VORTAC. I loaded the VOR approach and used JIBTO as the IAF. I also tuned nav 1 to the VOR and assigned a bearing pointer. I kept the GPS “magenta needles” on the CDI of the G500TXi. I monitored the bearing pointer to confirm that I was on the 181-degree radial of KIMM. No problem. When I was established on the FAS, the GTN indicated that I was flying an LNAV approach. Note that flying the DME arc and the intermediate segment with GPS is already allowed.

I also flew this using the VOR as primary navigation. The distance from the LBV VOR to the MAP is over 23 NM and the precision is not as good as GPS. Some scalloping was also evident. If flying into KIMM, I would select the RNAV to RWY 18 instead of the VOR with GPS any day since with the RNAV approach I also get a glideslope. The big advantage might come at airports or runways without RNAV approaches. I think that this feature would be more advantageous internationally where VOR and NDB approaches remain more common.

But what if you don’t have a GTN, or you do but haven’t updated the software? This is a much more difficult question since it involves both capabilities and legality.

My first instinct is to try it in VMC. I understand from a friend with a G1000 that he can fly the VOR approaches with GPS. Legality is another issue. Thoroughly check the navigator’s AFM supplement. If the answer isn’t clear, see if the manufacturer will give you a clear answer. Failing all that, I’d rely on the AIM.

And On the Ride…

Assuming that one has a GTN, if you are going to do a VOR approach on an IPC or checkride, you’ll need to discuss beforehand that you plan to use GPS for primary FAS guidance. Since this seems to be a recent development, not everyone will be aware of it. You might even pull out this article.

Last, we’d be interested in hearing from anyone who’s gotten a definitive answer with other navigators.

Luca Bencini-Tibo, misses having an ADF for navigation using commercial AM radio stations in South America but he doesn’t miss NDB approaches with stiff cross winds.