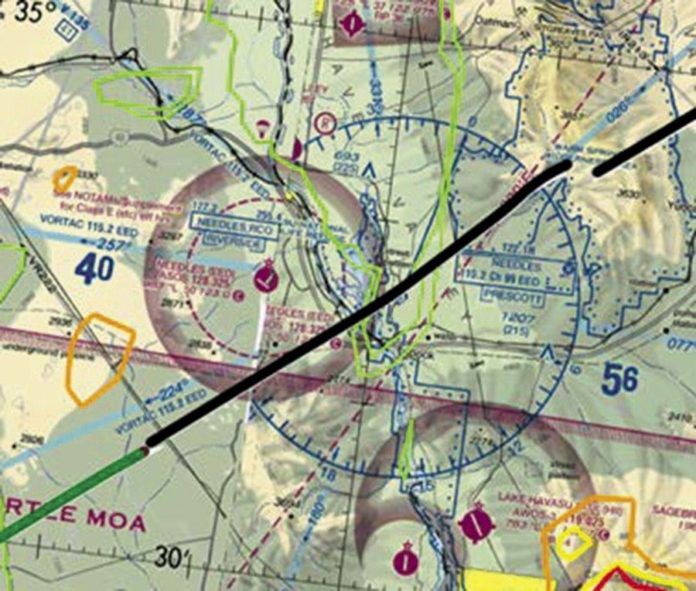 Dark clouds are looming on the horizon of our otherwise exciting GPS future. With increasing frequency, the military is jamming or spoofing GPS over huge swaths of airspace. A typical GPS NOTAM for Albuquerque center covers a radius of 237 NM at 10,000 feet, 207 NM at 400 feet and 165 NM at 50 feet daily for most of a week. Pilots in the Southwest have become accustomed to these NOTAMs, but they’re becoming more frequent and expanding to other areas of the country.

Jamming is bad enough, but there’s been little talk of spoofing. GPS spoofing occurs when the GPS signal is replicated in a manner that provides incorrect location information. For example, at the Geneva Motor Show, a spoofing attack reported show-car locations, not in Geneva, but in Buckingham, England, in the year 2036.

While that might seem cute, imagine flying the RNAV approach into Angel Fire, New Mexico. Five miles either side of center line on the initial segment from the west puts you in the mountains.

GPS spoofing is insidious and doesn’t provide user clues like jamming does. We just don’t know. A report by RTCA found that GPS interference can affect most every system of a modern aircraft; ADS-B, GPS, TAWS, AHRS, communications, PFD/MFD, and ELT.

The War on Terror

National Security Presidential Directive 39 ordered the military to train in settings as realistic as possible. Managing GPS in a war theater, either through interference or spoofing, is critical. The Center for Advance Defense reported “GNSS spoofing activities in the Russian Federation, its occupied territories, and its overseas military facilities are much larger in scope, more diverse in geography, and longer in duration than any public reporting suggests to date.”

According to a National Defense article, Russia and China already assume that any signals from space would be blocked during a military offensive.

Before 2000 the military reduced GPS accuracy with Selective Availability (SA). Selective Availability would reduce the accuracy of the civilian signal significantly. In March 2000, President Clinton issued a Presidential Directive bringing the end of SA to “make GPS more responsive to civil and commercial users worldwide.” Interestingly, the same statement noted, “we have demonstrated the capability to selectively deny GPS signals on a regional basis when our national security is threatened. This regional approach to denying navigation services is consistent with the 1996 plan to discontinue the degradation of civil and commercial GPS service globally through the SA technique.”

Where does it leave us?

When the FAA developed its Performance Based Navigation (PBN) and NextGen strategy, they recognized that “with both navigation and surveillance through ADS-B being derived from GPS, an opportunity for common mode failure is created. An aircraft can lose navigation and the FAA can lose surveillance that would normally compensate for loss of navigation. The ability to disrupt air transportation by interfering with GPS becomes more likely as aviation grows more dependent on GPS as its major source of flight information.”

One alternative to GPS is DME/DME or inertial positioning, but those systems are expensive and primarily the domain of transport aircraft.

Discussions about eLoran as a backup to GPS pop up and disappear like a prairie dog in North Dakota. As an update to the old LORAN-C, eLoran includes UTC synchronization, differential corrections like WAAS, and more data. It promises to allow instrument approaches down to non-precision minimums. Want another box in the panel?

With no additional capability few pilots can justify equipping with an RNAV alternate to GPS. Additionally, there isn’t any support where it really matters—the approach phase. Other than an RNAV approach specifically requiring GPS, there is only RNP with a whole new can of worms. Even if a magical genie made an alternative method of RNAV operational overnight, the performance probably wouldn’t allow a plug-n-play with GPS and there would be no charts to use!

Bottom line is that there is no real backup to GPS. Any discussion about backups is about triage—getting airplanes on the ground. It’s like flying non-radar in the U.S.—possible but it’s a total mess because no-one is proficient.

With the current trajectory of GPS-based RNAV, aviation is going to run into similar problems. Losing GPS navigation, and the ATC surveillance it’s predicated on, could leave both controllers and pilots quickly trying to dust off old skills.

A growing number of airports are like Angel Fire, NM—served only by RNAV(GPS) approaches, a significant distance from a VOR or airway, and frequently subject to GPS interference testing. The AIM notes that both “UNRELIABLE and MAY NOT BE AVAILABLE are advisories” only and that if GPS is available pilots may continue to use it. This appears to be a cavalier approach since the system can’t predict intentional interference events.

Before issuing a clearance for an RNAV (GPS) approach ATC must advise if GPS NOTAMs are in effect. But the RTCA found in a 2018 report that GPS “interference may be done at different power levels, terrain can have a big influence, and that interference may start and stop at any time during the approved window. In this case, a pilot who decides to fly an approach may find his signal abruptly lost or degraded.” At an airport like Angel Fire, surrounded by terrain and below radar coverage, the only option might be to climb to the 14,400-foot MSA. In my little Cessna, I’d be half way across the Texas panhandle—or embedded in a mountain—before I could reach that altitude.

A tool for pilots within an area of intentional DoD GPS interference is the phrase “stop buzzer.” Stop buzzer is an ATC term used to stop electronic attack jamming activity that’s being brought into the pilot lexicon. If experiencing GPS anomalies within an area of NOTAMed activity a pilot can tell ATC to “stop buzzer” and they will coordinate with the DoD to stop the GPS jamming activities. The request could take some time since it’s routed through ARTCC to the DoD.

Ironically, in an FAA pamphlet touting the advantages of WAAS to airport operators (undated, but still available online), the agency stated “if for some reason the WAAS service becomes unavailable, all GPS or WAAS-equipped aircraft can revert to the LNAV decision altitude and land safely using GPS-only, which is available nearly 100% of the time.” We’ve learned this just isn’t the case.

It isn’t the worst of times, as Dickens would say. The aviation community is increasingly aware of the challenges caused by intentional GPS interference and spoofing. As more events occur, additional pressure will be placed on the government and DoD to balance national security requirements with those of civil aviation. When flying into areas only served by GPS and there are GPS interference NOTAMs, caution is prudent. Regulations haven’t caught up to the opaque threats presented by intentional GPS interference. Have a plan in your pocket for when GPS goes haywire, including an alternate that uses terrestrial navigation aids, although one isn’t required for most. And keep that snazzy, cool-sounding lingo at hand: Stop Buzzer!

Jordan Miller spends as much time flying in China as in the U.S., and both countries are starting to look eerily similar to him. If only U.S. controllers would start separating traffic by course offsets…