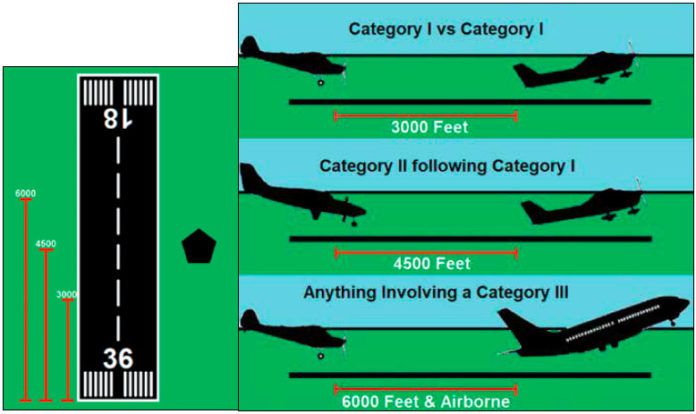 Flying is a great joy. There is plenty of airspace on the planet for all of us to go our own way and still have miles between us and another aircraft. You could probably say the same thing about driving if we didn’t have to follow the roads. But similarly, a good portion of us travel on airways or within controlled airspaces, very close to others. Of course, the busiest of that airspace is Class Bravos where so many of us seem to congregate .

In my last article, I mentioned the importance of understanding the other side of the big picture, and briefly went into separation requirements. Separation itself is its own article, but just how close can a controller allow two aircraft to get? The short answer is that it depends on where you are. Separation requirements on VFR aircraft vary with the type of airspace and radar facility, and some of those can put you pretty close. For those of us who are not part of a precision air demonstration team with 10 feet or less separation where do you draw the line?

Let’s start with a basic understanding. What is separation service? First off, when you are receiving it from ATC, it’s playing by their rules based on what airspace they are working and if you are flying IFR or VFR. Basic IFR separation is three miles laterally and/or 1000 feet vertically. Basic VFR separation means “don’t let ’em touch.” Then, if you’re not talking with ATC at all, “don’t hit anyone!” (Note that Special VFR is treated similarly to IFR, so we’ll skip a separate discussion on SVFR.)

Class G airspace is uncontrolled, thus there’s no ATC separation service for anyone. There are a couple exceptions to this rule, the main one is if there is an ATC Tower present (applies mostly to newly formed airfields/ATC Towers until a Class D can be established). Again there is no separation in Class E airspace. Yes, that includes flight following—you are afforded no separation services. ATC might issue traffic advisories (workload permitting) and maybe throw in a turn to bypass restricted airspace, but that’s about it. Anything more and you just have a nice controller who’s going above and beyond.

We’ll skip Class D for now. Class C airspace will separate VFR from IFR aircraft, and they will issue traffic advisories. Class B is one of the more interesting airspaces when it comes to VFR separation. Whenever you are cleared to fly through Class B airspace, you and all other aircraft are provided with a minimum of 500 feet separation (until/ unless visual separation can be used). It’s kind of weird getting headings and hard altitudes to fly while you are VFR. It is completely legal, and pilots are wise to play by the rules in Boeing country.

While ATC has specific separation standards, we pilots typically just don’t want to get too close to another airplane. So, why should that change when you start talking to ATC? You still don’t want to get too close, yet the controller could vector you directly at traffic. Even if you have the traffic in sight, how close will you get? And what if you don’t have the traffic in sight?

While flying, I don’t mind getting rather close to other aircraft as long as I can see them and have an out if they maneuver unexpectedly. When controlling, I like to apply the same principle, but with added space. There is no shame in maintaining larger margins as long as we can still handle the overall traffic volume. As always, if the controller’s idea of separation isn’t clear to you, or worse, leaves you uncomfortable, you should simply ask.

From the Ground, Up.

Now let’s talk about Class D surface areas. One of the main reasons I go to work is to provide runway separation. That is my main minimum requirement for separation services. Quite literally almost anything can happen in the air (not to include near misses or collisions). Of course, we don’t just sit around watching and say, “I hope airplanes don’t hit each other.”

When I train newer tower controllers, I train them to “work runway out” because that’s where all separation starts for us. Obviously, we aren’t always and only looking at the runway; we just start the scan there. Past that, VFR separation for most of us Class D controllers means, “Don’t touch.” Even when airplanes get close after calling each other in sight, we still sit there and make sure we don’t have merging targets. Our separation requirements are minimal, yet we still continue to have you extend downwind until you spot and call the aircraft you are following. We are also required to assist in separating IFR departures, only to the extent of not launching a fast departure right behind a slow one, which is kind of a general rule anyway.

So, maybe now you’re asking, “what runway separation does a Tower controller give?” I’ve illustrated that for you, but it’s actually pretty simple: 3000 feet between two Category 1 airplanes or a Category 1 following a Category 2; 4500 feet with two Category 2 airplanes, and 6000 for anything over 12,500 pounds.

Category 1 is a single engine piston under 12,500 pounds. Category 2 would be twin-engine aircraft under 12,500 pounds, and Category 3 is everything else. If you fly a piston single, I really hope this one hits home. I see a lot of small aircraft that are hesitant to cross the landing threshold because the other airplane is either not off the runway or not on the go yet. It’s mainly a trend with student pilots, and might stem from good non-towered field etiquette.

If I have a 10,000-foot runway, I could technically have 3 airplanes on the runway at once, as long as each is a Category 1 and they’re all at least 3000 feet apart when they pass the threshold. The threshold is the big white line marking the start of the runway and some of us call it “the fence.”

Unless it’s a formation flight, runway separation is based on two airplanes. At most Class D airports, controllers use this to keep efficiency at its highest, suitable landmarks are a clear requirement so we can accurately judge that distance. There is some discussion on what can be used for that, but the main thing we look at are the runway distance remaining signs.

There should be a little flexibility between a pilot’s personal minimums and what ATC provides. A pilot’s “comfort zone” might not be consistent with what the controller has in mind. Remember, depending on airspace, the VFR separation standard for ATC means not letting two airplanes touch. If pilots find themselves in a situation where they lose that comfort zone, they should act accordingly. Do not be afraid to query ATC for an update on traffic, and avoid the traffic at all costs. I am absolutely not telling pilots to break their personal minimums, but I am saying that if those rules can’t be a little flexible, you might need to take a delay. Just like flying in IMC you trust your instruments, flying VFR try to trust the controller, but if it doesn’t feel right, speak up.

Traffic in Sight? Taxi to Parking

Everyone who reads this article will interpret it differently. Very experienced pilots get the idea and will probably just roll with it. But low-time pilots might be (should probably be) more cautious, and students could be left wondering what it all means. Here’s what it means from this controller’s perspective. Controllers are seldom required to separate VFR traffic very far, but often provide greater separation, but occasionally the provided separation is “too close for comfort” for the pilot. Pilots who are able to meet us in the middle help keep the NAS fluid. Please fly safe and don’t touch anybody else.

In 2020 we didn’t exactly have steady heavy traffic, although we did have a handful of random occurrences. One of these was a pilot that was “in fear for his life” because he decided to go around. So, here’s the story…one PA28 in the pattern, a PC12 coming down final and an SR22 inbound from the northeast. The pattern traffic decides he is done and would like a full stop. I told him to continue closed traffic and that he was following a PC-12 on a three-mile final.

The SR22 called from about five miles northeast. I told him to go right downwind for 36. The PA28 uneventfully made closed traffic and shortly after called the Pilatus in sight. “Number 2; follow that traffic. Runway 36, cleared to land.” He read it back correctly. Right about that time, he was abeam the numbers and the PC12 was about ½ mile final, and he turned base. Now from a Tower perspective, this is nothing out of the ordinary. Worst case, “You can always go around!”

So, he comes in a tad fast, turns final while the PC12 is not yet off the runway, but I have my required 3000 feet. My SR22 reported turning downwind about a mile northeast and I told him he was now number two following a PA28 on final. As it’s beneficial for me when I fly, I like to issue a wind check to aircraft on short final, workload permitting—no callsign, just a wind check. “Wind 340/10.” The PA28 pilot comes back with an urgent, “Is he getting off the runway?” I replied, “Affirm, he should be exiting next taxiway.”

Well apparently, that wasn’t good enough. “We’re going around!” Okay, so that’s not the first time I’ve seen this, and honestly, I didn’t mind. It means I got to work the planes a bit longer!

Instead of going around (either on the left side or right side of runway, not to overfly the aircraft on the runway), the PA28 immediately performs what appeared to be a chandelle to the right, directly toward the SR22 in the downwind While I was slightly in shock, I immediately keyed up and yelled, “Turn back to the left. Traffic right in front of you!” That’s not exactly standard phraseology, but was my knee-jerk reaction to the urgent situation. There was no verbal response from the pilot, but he did straighten out and pass just behind the SR22. After that I had him fly out and do a left 270 back to the downwind for a full stop. With no further drama, everybody landed safely.

To no surprise, the pilot called the tower after landing to complain. He said that he was “in fear for his life.” I tried to understand why, then explained to him my separation requirements on the runway. I further explained how it was not good that he just climbed into the SR22 in the downwind. It seemed that nothing I explained was good enough, so he hung up. It seemed shortly after that, someone further up my food chain must have explained the same thing, and he understood that time. All in a day’s work. —EH