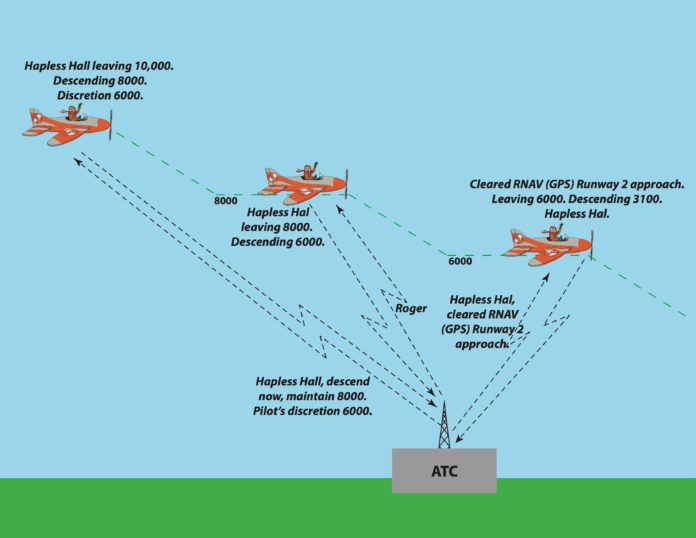 W hat if you were somewhere, say a party, and the host asks you to let him know before you leave. Do you do it? Do good manners and social protocol require you to do so? What about when you are on an IFR decent and the Controller asks you to report leaving an altitude. What then?

You’re just following what you understand to be a required call. However, you do the same thing when vectored and cleared for an approach clearance, and again it’s, “Thank you” or “Yea I don’t care.” What is the difference? As it says above, it’s required, right?

Let’s start with what I hope is obvious: As long as you are following the rules as you understand them to the best of your ability, and acting in a safe way, you are not wrong. As I have mentioned before, disgruntlement on frequency from either side is non-productive.

With that being said, does this report apply to every single time you talk to ATC? Short answer is no. Sometimes it helps and sometimes it helps less. We’ll go over that more below. Normally when departing IFR from anywhere, one of the first calls you make to ATC is something along the lines of, “Departure, N12345, climbing two thousand fife hundred for fife thousand.”

In the case of the departure, and from a certain perspective, I could call that report a requirement. The respective approach/center controller is required to verify your altitude anyway to make sure it is what they are seeing on their screens, just like the Tower controller is required to make sure you are squawking the right code before they switch you. As you continue your climb, and as annoying as it can be, the verification requests could continue on every new frequency, and certainly with each new facility. While your initial departure and the climb is where you will report leaving an altitude the most, what about when you’re at cruise or even up in the flight levels?

Up in the flight levels, you may get more “pilots’ discretion” than below. “N12345, descend pilots’ discretion maintain FL220.” It means you can descend when you want to right? You may even get one of these with the restriction “Cross “DAFIX” at one-two thousand.” The obvious intent is to let pilots decide when they want to descend that helps them the most, so long as the pilot meets the overall altitude requirements for the controller’s airspace, in this case, being at 12,000 feet by DAFIX. Unless the controller specifies a specific descent, this crossing restriction means that you can begin your descent at your discretion.

Controllers often give this instruction when they have clear airspace surrounding that aircraft. Maybe you don’t want to descend for another 20 miles, but did you notice that the instruction above said nothing about “report when leaving?” Although not specified in the AIM, in my opinion, one of the main reasons for the “vacating any previously assigned altitude or flight level for a newly assigned altitude or flight level” is in conjunction with the pilots’ discretion climb or descent.

You get a pilot’s discretion call, so it would be logical to report when you have made up your mind and start to descend, wouldn’t it? Some pilots won’t bother with the report leaving if given a pilot’s discretion descent. Others always do. Yet others might report leaving if they delay initiating the descent but won’t report if they start down immediately after that call.

To ATC, a descent at pilot’s discretion means the controller has given you all the altitude between your present altitude and the target, so there’s nothing (no traffic, no terrain, no obstacles) between you and the newly assigned altitude. In other words, the airspace is clear and it typically doesn’t matter when you begin your descent.

Just like some pilots rigorously follow the rules and make that report every time they leave a previously assigned altitude, and some don’t, some controllers gladly accept and acknowledge the report while others, knowing it’s superfluous in most cases, either ignore the report or might respond with a clearly disinterested—or occasionally even disdainful—voice. Maybe about 50 percent of pilots make the report and perhaps 50 percent of controllers care.

Okay, the controller gives you a new altitude and you’re in the half of the pilots who chooses to report. When do you report? Does it matter if you’re en route or on an approach clearance? It does matter.

You can take one rule out of whatever book you want and apply it to multiple situations. First, if ATC asks for you to do something, you should probably acknowledge it and then do it. Think of these reports as a way to help pilots while at the same time helping watch ATC’s back. A controller won’t be asking for a report to make sure you do not hit anyone else, but rather a “just in case, better safe than sorry.”

Of course, in most cases the controller is watching you and will make that coordination whether or not you make that report leaving. But lots of things could happen and change the circumstances quickly and the controller might get distracted from that coordination. In other words, most of the time your report is indeed superfluous, but sometimes it can save the controller’s butt. It only takes a second to say, “N12345 leaving 220 for 160.” As long as you do not add a 5 second sneeze or a few seconds of “um” and “ah” to that transmission, you are good to go.

Yes, as a controller and as a pilot, I’m in the “better safe than sorry” camp and I recommend those (required) reports.

You may think that “report leaving” is a requirement or you just do it anyways. In the instance of an IFR approach, however, it really is not needed. You will very rarely, if at all hear a “report leaving” while being vectored or established on an instrument approach. Let’s take this ILS to Runway 09 at Memphis for example.

You should be thinking if you can descend and if you should acknowledge or report. Yes, you can and the report is implicit in the acknowledgement. You read back verbatim and start the approach. The whole point of this conversation is to get you started on your approach. It is understood on both sides that you will be descending accordingly to cross FALIX at the procedure altitude.

Again, in the instance of this approach, that report leaving is not required. One thing to think about though, is if you typically make these calls, be aware of how busy the frequency is. Know that “precious seconds count” and do your part to save them. Don’t let radio efficiency deter you from asking for something you need, though, like a little more time to descend.

But, what if you’re 20 miles south of Springfield, MO, and your next fix is AWAQE defining a TAA for the RNAV (GPS) RWY 2? You might be at, say, 6000 feet and you simply get cleared for the approach.

You’re within the TAA and can descend to 3100. But, this is unique enough that I’d probably reply, “Cleared RNAV (GPS) RWY 2 approach. Leaving 6000. Descending 3100.” Again, the report isn’t required. But it might help with everyone’s situational awareness.

As we’re always learning, we should also be applying new thinking to our old habits. Whether we believe report leaving is required or not, it only takes a second and can sometimes improve safety. There are plenty of other things ATC would prefer you avoid on frequency (like “with you” or “fish finder” or…).

It wasn’t too long ago that I was on a long cross-country working on my commercial rating, and just for the fun of it, I was on an IFR flight plan…on a clear-and-a-million day. It doesn’t hurt to practice procedures and rules without the soup surrounding you every now and then to keep you on your toes.

I was approaching my destination airport and got a decent 2000 feet below where I was. I heard the instruction, read it back verbatim and complied. A few seconds later, I heard the controller talking to another airplane on frequency, going to the same airport. From how I understood the airspace and heard the other pilot, he was about five miles behind me. I figured that the controller would give me a turn to get out of the other guy’s way. Nope. He told the other guy “best forward speed, descend to (1000 feet below me).” He gladly took it and I could see him slowly passing below me.

Fast forward 10 miles and I was still relatively close to him, and the controller gave me a PTAC (Position, Turn, Altitude, Clearance), “N12345, 10 miles from FIX. Turn right 170. Maintain 2000 until established on the localizer. Cleared ILS Runway 20 approach.” I was immediately baffled, as the fast mover below me had not been turned or cleared for the approach. Every fiber in my being told me to say something…nicely. “N12345…leaving 3000 for 2000…?” (with a question tone).

One, two, three seconds go by. “CORRECTION! N12345, cancel approach clearance. Fly current heading. Maintain 3000.” In the plane, I was laughing hard, but brought it together and read everything back. He then went to the quick mover below me and gave him the clearance he initially gave me.

After all was said and done, there was a calmer voice on frequency and we all landed safely. I met the pilot who overtook me on the ground and asked if he heard everything, and sure enough he was initially nervous I would descend on him, but after I nicely verified, he was laughing all the same. What is the takeaway? My altitude assignment was part of an approach clearance, so a report wasn’t necessarily needed. But that little tid-bit of information keeps us pilots safe, and the controller in synch. One nice thing about time-building is you are never in a rush to get somewhere. —EH

Even though it is not a requirement, Elim normally tells his wife when he leaves for work and gets a similar reaction. Half the time she cares, the other half she does not! Absolutely better to stay on the safe side.