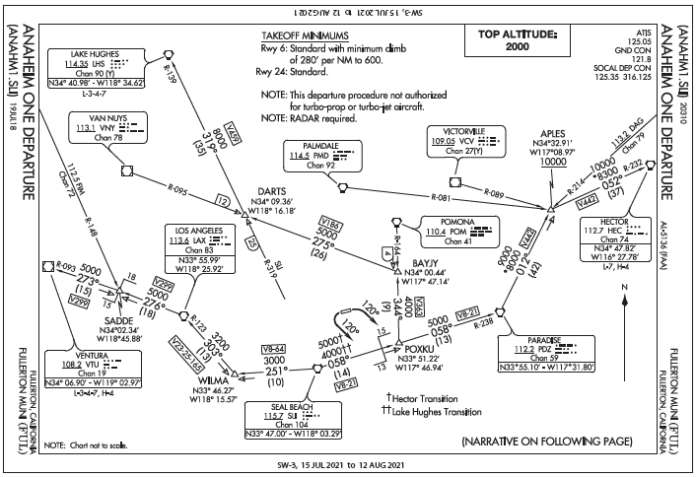 You and two friends are flying to Nashville for a weekend of great music. It will be an IFR flight from Asheville, North Carolina (KAVL), to John C. Tune (KJWN). Your clearance is what you expect: “Cleared to the John C Tune Airport. Asheville Seven Departure, then as filed. Climb via the SID.” You depart Runway 35 on an assigned runway heading. Handed off to Departure at 3000 MSL, you are instructed to proceed direct Snowbird. Looking in that direction, you notice those mountains look disturbingly close.

There are two components to ATC clearances and instructions. ATC’s primary responsibility is keeping IFR aircraft from running into each other. Our associated responsibility is to comply with ATC clearances and instructions. Particularly during the approach and initial departure phases, though, we and ATC are also concerned with remaining clear of terrain and obstacles. 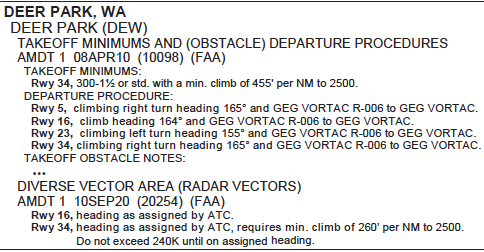 We’d like to always rely on controllers to keep us away from obstructions, but ATC’s responsibility for obstruction clearance on departure varies with the situation. Ultimately, regardless of who else might have responsibility for obstruction avoidance, we pilots, as PIC responsible for the safety of flight, always have it too. (Recall that old joke about the similarities between pilots and controllers: When the pilot screws up, the pilot dies. When the controller screws up, the pilot dies.)

We can divide IFR departures into four general categories: diverse departures, obstacle departure procedures (ODP), standard instrument departures (SID), and radar departures. There is some overlap. For example, some SIDs are primarily a series of published courses and altitudes. Others are shorthand for a routing based only on radar vectors.

We should be familiar with the standard IFR departure profile. Cross the departure end of the runway at or above 35 feet AGL, climb to 400 feet AGL before turning, and maintain a climb of at least 200 feet per nautical mile (FPNM) to the minimum IFR altitude.

When an instrument approach is developed for an airport, a departure obstruction assessment is also made. If the assessment shows that, no matter which way we turn, nothing will be in the way when using the standard departure profile, we have a “diverse departure.” If the requirements for a standard climb profile in all directions aren’t met, there will be an ODP specifying directions, nonstandard climb gradients, or both.

The ODP could be as simple as a straight-ahead climb to an altitude other than 400 feet AGL or a series of turns and altitudes. In the FAA world, the details are in “Takeoff Minimums, (Obstacle) Departure Procedures, and Diverse Vector Area (Radar Vectors)” section of the Terminal Procedures Publication (TPP). A symbol on FAA approach charts alerts us to check for them. In the Jeppesen world, obstacle departure information is included in the “10-9” airport diagram. Some ODPs are charted in a manner similar to SIDs. When they are, the TPP Takeoff Minimums and Jeppesen 10-9 will contain a note such as, “use ANEKE RNAV DEPARTURE,” the note for Angel Fire, New Mexico (KAXX).

Although listed separately, the special minimum climb rates described in “Takeoff Minimums” apply to the ODP from the same runway. For example, in the entry for Deer Park, Washington (KDEW), a Class E surface area, the 455 FPNM climb rate for Runway 34 applies to the Runway 34 obstacle departure procedure.

A “Diverse Vector Area” (DVA) also appears in the KDEW entry. An airport can have an ODP but nevertheless accommodate radar-assisted diverse departures. When this is the case, a DVA will be published in the TPP along with the ODP. This allows ATC to issue radar vectors from the ground instead of the pilot following the ODP. However, just like any other non-standard departure procedure, a DVA may have its own limitations. At Deer Park, both Runways 16 and 34 allow radar vectors as part of the initial departure clearance but vectored departures off 34 require a minimum climb rate of 260 FPNM rather than the standard 200.

Remember that obstruction assessments are only made for airports with an instrument approach. As we discussed in “Not Enough Departures” (October 2018 IFR), if you depart IFR from your favorite nontowered field that has no instrument approach, you are completely on your own.

Finally, as some point out, ODPs and takeoff minimums are optional for Part 91 operations (unless assigned by ATC). I think the reverse is more important. It is our right to use an ODP even if it isn’t in our clearance. (AIM 5-2-9) This is not an invitation to disregard a clearance, but an invitation to communicate our intentions. Being on the same page as ATC is always best.

In this case, the introduction to the TPP Takeoff Minimums section explains, “ATC should be informed when the ODP being used contains a specified route to be flown, restrictions before turning, and/or altitude restrictions.” If we are departing nontowered, the two best ways to do so is a note in the comments to our flight plan or, especially with direct telephone contact with the controlling facility now available, informing ATC of our plan when obtaining our clearance.

The pilot’s prerogative to use an obstacle departure procedure is limited on SIDs and radar vectors. Even then, we can see that pilot responsibility for obstruction clearance continues.

ODPs can be assigned by ATC for traffic separation. But their main purpose is obstacle clearance. In contrast SIDs are, in essence, pre-packaged clearances and instructions to manage ATC’s responsibility to separate aircraft. Nevertheless, SIDs are designed to guarantee terrain clearance.

As a general rule, once ATC gives you radar vectors, they have responsibility for obstruction clearance. Understand a basic concept: the phrase, “Radar contact” by itself does not (emphasis on “not”) pass any obstruction responsibility to ATC. Think of “radar contact” as merely, “I see you and know who you are.” Identifying you is both a precursor and a precondition to navigational guidance, but it isn’t enough. It’s only when accompanied by directional instructions that we have “radar vectors.”

Once ATC combines “radar contact” with nav instructions, it has responsibility for obstruction clearance. “Radar departures” are an example of the intersection between radar contact and navigational guidance. These are the familiar IFR clearances that, even if not part of a SID, begin the route portion of the clearance with “radar vectors to…” accompanied by an initial heading at or before takeoff.

As Paragraph 4-3-2 of FAA Order 7110.65Z—the ATC manual—explains, radar departures are designed to be used in diverse departure/DVA situations. The initial heading “must be given no later than with the takeoff clearance.” Importantly, while they may be used at airports with Class E surface areas “when necessary,” ATC is required to “Obtain/solicit the pilot’s concurrence concerning a turn or heading before issuing them in a clearance.” Note the recurrent theme—pilot responsibility never completely goes away.

Another early transfer of obstruction responsibility to ATC during the departure phase occurs when ATC vectors us off a published route on a SID or ODP. “If an aircraft is vectored off a published Standard Instrument Departure (SID) or Obstacle Departure Procedure (ODP), that vector cancels the DP and ATC becomes responsible for separation from terrain and /or obstructions. IFR aircraft must be assigned an altitude.” (ATC manual, Paragraph. 4-3-2). The statement is echoed in AIM 5-2-9.

Although the net effect is the same—radar vectors—we can distinguish between SIDs with defined courses such as the ANAHEIM ONE, above, and SIDs that are simply canned radar vector clearances, such as the DENVER TWO on the next page. When we talk about “vectors off a SID,” we are talking about something like vectoring us off the POKU–PDZ leg of the ANAHEIM and sending us direct to DARTS. The DENVER SID is really just a charted radar departure.

Uncontrolled airport surface areas (700 or 1200 AGL) are a semantic “gotcha.” Class G airspace can be roughly defined as airspace in which ATC has neither the responsibility nor authority to control aircraft. ATC clearances from the ground at airports with Class G at the surface begin with “when entering controlled airspace,” often followed by “fly heading…” Therein lies the “gotcha.” Despite the wording, being told to “enter controlled airspace” on a heading is not a radar vector. Earlier, we made the point that radar contact without a heading does not transfer obstruction responsibility to ATC. This is the other way around—a direction without radar contact doesn’t guarantee obstruction clearance either. 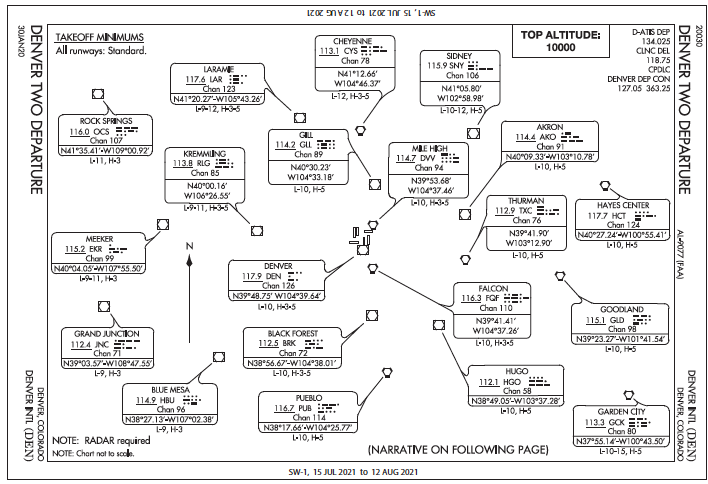 If in a diverse departure area, you’re safe if you maintain the standard climb profile. But, with an ODP or a published higher climb gradient, be sure to meet it. It is your only guarantee of obstruction avoidance in the clouds.

Asheville has two sources of obstruction departure information: the SID we were assigned and the textual ODP. Both, as well as ATC directional instructions, are intended to guarantee obstruction clearance—but only if we meet the climb requirements. For a takeoff on Runway 35, the ASHEVILLE SEVEN requires a 490 FPNM climb for over 1300 feet before reducing to a standard 200 FPNM climb. In a GA piston aircraft with a 90 KIAS best rate of climb speed, that is a 735 foot per minute climb. Add a high density altitude day to the mix and that might be difficult to manage with two buddies on board.

Let’s turn to the ODP. It requires a climb to a higher altitude, 5500 MSL before turning, but at a shallower climb profile, 390 FPNM, a 585 foot per minute climb rather than 735. On a hot day when we will be entering the clouds, there is nothing to lose and everything to gain by examining our performance charts and advising ATC if we will need to climb straight ahead to 5500 feet before turning.

That’s a lot of information. The times ATC does and does not have obstruction responsibility is summarized in the table below, so long as we always remember that ATC being responsible for obstruction clearance does not negate the pilot’s responsibility. 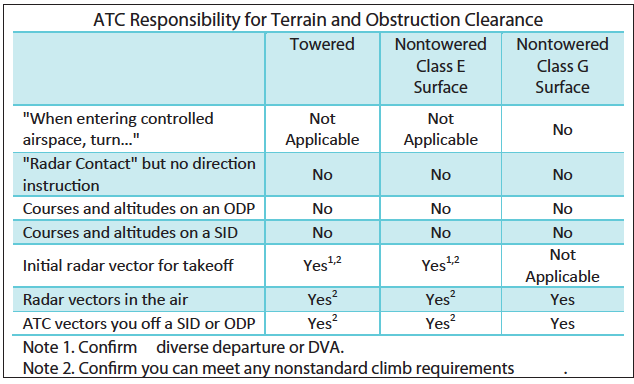 The real takeaway is, while ATC does a great job, we are ultimately responsible for our own safety and the safety of our passengers. Unless we fly regularly in areas where there are surrounding obstacles and terrain, we tend to take obstruction clearance for granted when communicating with ATC. Don’t. We can’t expect controllers to know the performance limitations of the aircraft we fly. Check the Takeoff Minimums and Departure Procedures in your TPP or on the Jeppesen 10-9 as part of your departure planning. Speak up if you can’t meet the climb requirements and request a modification or reject a procedure.

The ATC manual contains advice for controllers assigning departure procedures. “It is important for controllers to understand that there can be differences in published climb gradients applicable to individual departure procedures serving the same airport or runway.” When they are issuing an initial DVA vector from a Class E surface area, they are told to “Obtain/ solicit the pilot’s concurrence concerning a turn or heading before issuing them…” That’s good advice for them and an important reminder for us.