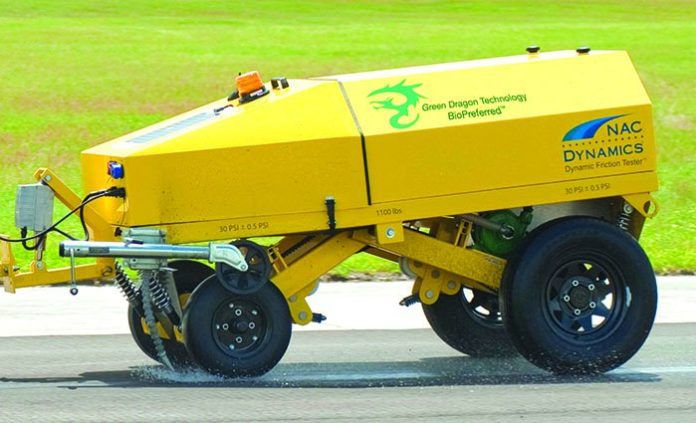 The chief advantage of being instrument-rated is being able to travel in less-than-ideal weather. But, in winter, the triumph of a well-flown ILS to minimums in moderate snow can quickly turn to sheer terror after your smooth touchdown if you find yourself slipping off the side of an icy runway.

Handling the aircraft is one thing; but, we must first understand what information is available about runway conditions, and how we can use that information to enhance our decision making and influence our technique.

In the AIM glossary, braking action is defined: “A report of conditions on the airport movement area providing a pilot with a degree/quality of braking that he/she might expect. Braking action is reported in terms of good, fair, poor, or nil.” “Braking Action” is in bold italics, meaning that it is used frequently in pilot/controller communications.

Braking action reports extend not just to runways, but also to other movement areas, such as taxiways. Plus, such reports are inherently subjective, not determined quantitatively.

At the end of the entry for braking action, there is a note that says “See Runway Condition Reading.” Spoiler alert: If you don’t fly for the U.S. Air Force or Air National Guard, this term has no bearing on you.

AIM 4-3-8 gives us all the guidance we’re going to get in an FAA pilot reference on braking action reports. The guidance begins “When available, ATC furnishes pilots the quality of braking action received from pilots or airport management,” and restates the four qualitative descriptors, adding that a combination of terms can be used if necessary (“fair to poor,” for example).

It goes on to encourage that the reports be specific by location, such as specifying the first or last half of the runway. Depending on the runway length and aircraft performance, a majority of your braking may take place in just one of the runway halves and this will help ATC and airport management relay information to pilots that may help them make determinations specific to their aircraft.

Paragraph b covers situations where numerous subjective reports may come in, and states that NOTAMs regarding braking action reports are published using the most critical—worst—condition reported. For example, if three reports were given reporting fair braking action and a fourth came in as poor, the NOTAM (D) would go out as “Braking ction poor.” Reports of poor or nil, or any time “weather conditions are conducive to deteriorating or rapidly changing runway braking conditions,” the ATIS will include the statement “Braking action advisories are in effect.”

This tells us that runway braking might not be ideal even when there hasn’t been a recent report. When weather conditions are “deteriorating rapidly,” airport operations are usually at a minimum, especially at GA-heavy airports, so warnings from the folks watching the runway disappearing under a blanket of white are good.

Interestingly, unlike specific guidance for turbulence and icing reports, the FAA doesn’t provide any braking action guidance—braking action is left to the judgment and vocabulary of individual pilots and airport employees. The only FAA definition to be found is in JO 7110.65V Air Traffic Control, which states in a note: “The term ‘nil’ is used to indicate bad or no braking action.”

To find more concrete definitions, we have to expand our search. In 2009, representatives of the FAA and industry formed the Takeoff and Landing Performance Assessment Aviation Rulemaking Committee to improve runway condition reporting and get such reporting more in line with international standards. What emerged from that committee was a table—not formally adopted—that does provide some specific guidance. Oversimplified, it tells us: a) Good = Normal deceleration, good directional control, b) Medium (known as “Fair” domestically) = Reduced deceleration and control, c) Poor = Deceleration and control significantly reduced, and d) Nil = Deceleration minimal to nonexistent and control is uncertain.

Beyond braking action reports, runway friction reports quantify runway friction with values obtained from special ground-based measuring equipment. AIM 4-3-9 c states that the friction value is represented on a scale of 0-100 (zero being no friction) by the Greek letter mu (μ). MU values in the U.S. are typically shown as whole numbers (40), whereas ICAO uses a decimal value (0.40).

Advisory Circular 150/5200-30C, says there are a couple of ways to measure surface friction and the FAA clarifies that the various equipment models do not give equal readings, so “The friction condition report should identify the friction tester type and the runway number, followed by the average friction numbers for each of the three runway zones (rounded to the nearest whole number), a short description of the type of contamination causing the runway friction problem, and the time the report was taken.”

Once measured, a MU reading must be distributed. For ease of use, we have a magic number that should act as a red flag for us—40μ. As AIM 4-3-9 states, “for frozen contaminants on runway surfaces, a MU value of 40 or less is the level when the aircraft braking performance starts to deteriorate and directional control begins to be less responsive.” This seems to parallel the definition for “Medium” (Fair), from the proposed table.

The AIM and AC 150/5200-30C provide guidance for airport operators on when to publish their MU readings as an advisory. “When the MU value for any one−third zone of an active runway is 40 or less, a report should be given to ATC by airport management for dissemination to pilots.” Both documents say that 40 is the highest MU reading that should be reported (and the AC adds that readings above that are unreliable). Additionally, “a report should also be given when MU values rise above 40 in all zones of a runway previously reporting a MU below 40.”

The AIM tells us to use such reports, when published, in combination with our own knowledge of aircraft performance (including such things as what type of tires we have) and weather conditions, in order to make an informed decision. The FAA is clear in treating friction readings and braking action reports as entirely separate and unrelated reports: “No correlation has been established between MU values and the descriptive terms ‘good,’ ‘fair,’ ‘poor,’ and ‘nil’ used in braking action reports.”

While some well-meaning operators may want to rely on the more quantitative measurement of a runway friction report to set limits, there’s a reason why taking all reports into consideration may be a good strategy.

Years ago I worked for a company that had a MU cutoff of 20—meaning that operations on a runway with a MU reading of less than 20 were not permitted. Unfortunately, one of the main airports from which the company operated only took their runway friction reports in the morning, just before the tower opened.

As anyone who drives to work early in the morning in a cold climate knows, paved surfaces are often covered with at least patchy frozen contamination, and only when the sun reaches a high enough angle does the frozen stuff start to disappear. Well, in this case, when the sun came up at this particular airport, the contamination would often sublimate, and braking action reports would come in noting the conditions improving as the sun angle grew.

Unfortunately, runway friction reports would not come in concurrently with the more pertinent braking action reports and the operator, through its own cautious policy, was unnecessarily limited in its operation. The policy was eventually revised to take braking action reports into account, and operations were improved without safety being compromised. The moral, of course, is to use all the information available to make a sound decision.

JO 7110.65V states that airport management should initiate a NOTAM (D) when the friction measuring device is out of service, thereby letting crews know that the absence of MU readings does not mean an absence of contamination. It also says, “when MU reports are provided by airport management, the ATC facility providing approach control or local airport advisory will provide the report to any pilot upon request.”

This section also contains guidance to standardize reports. For instance, ATC might get a description like “it’s real slippery” or “braking is not that great.” The pilot should be asked to restate these in the standard evaluations (good to nil). It also states that the location-specific terms solicited of crews by the AIM (e.g. first half of the runway) are the only acceptable location terms. Locations like “abeam the fuel pumps” refer to items that may not be identifiable in times of limited visibility.

The AC also cautions crews against putting too much stock into runway friction reports, going as far as to say that the FAA no longer recommends issuing friction measurements to crews. They stipulate, however, that MU values do have a place to track trends.

AC 91-79 gives us the context in which runway friction reports must be taken to provide trend information: “Mu values are best used to indicate trend in runway friction capability, however this is usable only if historic Mu values for the same runway surfaces are known which is not normally available to flight crews or flight operation centers. Runway Mu values can vary significantly for the same contaminant condition due to measuring techniques, equipment calibration, the effects of contamination on the friction measuring device and the time passage since the measurement. Therefore, do not base landing distance assessments solely on runway Mu friction reports.”

As we move from hydroplaning concerns due to rains, to the myriad of difficulties brought on by winter conditions, we must alter our thinking during our preflight and approach briefings. Gathering the best information about runway conditions is an essential piece of winter briefing and proper situational awareness. Knowing the context, source, guidance, and validity of braking action and runway friction reports helps us shape that understanding in a way that makes the transition from DA or MDA on approach to a fully controlled landing rollout as smooth as it can be.

Evan Cushing is a former regional airline training captain who saw MU readings in his sleep. Now he works at an aviation university where he mostly worries about friction as he paces the classroom floor.