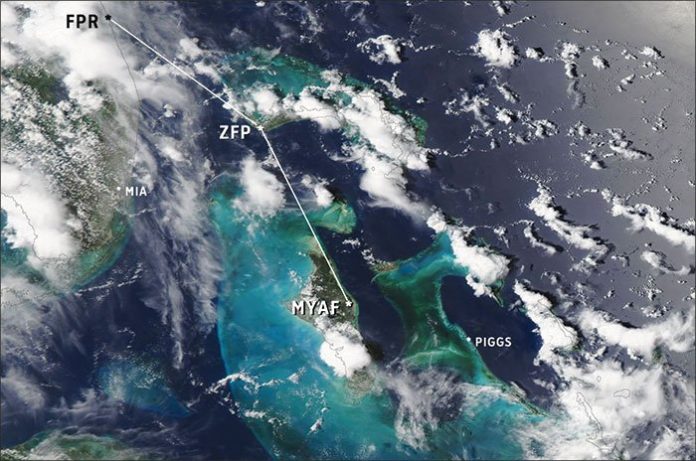 Excitement is in the air. We just left Fort Pierce, Florida. Rather than heading to a tame destination like Key West, we’re pointed southeast—open ocean ahead. Our friend Dave, a constant source of bizarre travel ideas, suggested we visit Pig Beach. Wild pigs supposedly enjoy this spot in the Bahamas, living a life of swimming, sun tanning, and getting dinner from passing tourists.
Matt owns the Mooney and has already planned out the flight, taken care of all the paperwork, and picked up the equipment we need to make the crossing safely. We chose Andros Town, just south of Freeport, to clear customs.

The Bahamas
To a lot of Florida pilots, flying the Bahamas is as familiar as the local Home Depot. But we’re from the West Coast and the whole over-water thing is new to us. They say the Bahamas has 300 days of VMC a year, which makes me wonder what happens on the other 65 days. Driving that point home, I read last night that the three worst air disasters in Cuba were all weather-related.
Flying the Caribbean puts us out of range of many modern conveniences like weather radar data and ASOS reports. We’re dealing with entirely different weather services, and METARs and TAFs can be rare. And the TAFs themselves are based on sparse surface and upper air observation networks, supplemented with bits and pieces from ship reports and satellite winds.

Tropical weather
Matt looks at me. “So, Mr. Meteorologist, why don’t you tell us how this whole trade wind thing works.”

“Hmm. Well, let’s build it all up block by block. It starts with solar heating. The sun beats down directly on the equator, and this gives the air in that zone a tendency to rise, like a hot air balloon. You get a belt of cloudy weather and showers circling the globe at the equator. All the latent heat release helps form a surface trough. This zone is known as the intertropical convergence zone (ITCZ) or monsoon trough.

This air at the top of the troposphere reaches the stable stratosphere and has to go somewhere else, so it diverges away from the equatorial zone to the subtropics. The Coriolis force in the Northern hemisphere turns everything to the right, including this belt of air. By the time it’s near 20 to 30 degrees latitude it’s mostly flowing west-to-east. You have more warm air coming into this zone from the south, but it’s getting quite crowded. The air can’t move upward into the stable stratosphere, so it’s forced downward.”

The lesson continues as I explain that the downward motion is called subsidence. There are a lot of deserts and fair-weather cities along 30 degrees north. It’s no coincidence. The heating from adiabatic compression not only produces warm, dry air but reduces relative humidity, making deserts. All this mass accumulating here produces a broad region of high pressure: a subtropical high.

The Bermuda High in the middle of the Atlantic Ocean is a good example of a subtropical high. In the summer it tends to expand, reaching from Spain all the way to New Mexico.

As the subsident subtropical air reaches the surface, it diverges north and south. The branch that moves northward is a zone known as the prevailing westerlies, and it is here where the vast majority of VFR flying is done in the United States. In spite of its name, the winds are actually southerly.

The other branch that flows south to the equatorial region is known as the trade winds. They’re normally northeasterly as they depart the high and turn more easterly due to Coriolis force. Fair weather is common in the trade wind belt, but north-south ripples in the wind field measuring hundreds of miles in length are embedded in the flow, moving east to west at about 10 kt. These are called easterly waves. Showers and broken to overcast clouds are common within and near easterly waves, and during the warm season easterly waves can deteriorate into tropical depressions and full-blown tropical storms. By following easterly waves as they progress westward, you can easily track areas of bad weather.

“So,” Matt says, setting his hand on the dash and thinking. “We’ve got constant easterly winds in the Caribbean and the Bahamas at the surface, but how high do I have to climb to be in that belt of southerly winds?”

“Well, it’s not that simple. The trade winds are pretty constant but there’s actually a lot of variation in the upper level winds. On average it moves to the northeast. Plus you really need to be above 15 to 25 thousand feet to be in it.”

Seasonal Changes
“But what about July?” Matt says. “The sun moves north. So is the ITCZ now up north hammering Cuba and Puerto Rico?”

“No, there’s about two months of lag, and at that point the sun is starting to move back south. In July the ITCZ is found mostly between Venezuela and Central America.”

“Ok. So the Caribbean and the Bahamas stay in the trade winds all the time. Now what happens in the winter? The ITCZ shifts back south. Does the Bermuda High move down to the equator?”

Miami Center calls our plane and hands us off to Nassau. Matt dials the new frequency and makes contact. He then turns back to me.

“Okay, so where does the Caribbean get its bad weather? Is it all from easterly waves?”

“That’s a big source of them,” I reply. “Also remember that the general circulation is just an average. Sometimes we get a few days of radically different patterns, like when cold outbreaks roll across Florida and spill out into the Caribbean during the winter. They modify pretty quickly, but what happens is when you’re doing that, you’re destabilizing the cold air mass. The result is layers of overcast stratus and stratocumulus. Winds can also be very gusty, sometimes up to 35 knots. So areas behind cold fronts are where you want to be IFR. The front eventually stalls and becomes stationary somewhere in the Bahamas or Caribbean and can leave large swaths of the area covered with IMC and marginal VMC ceilings for days. If the sea is warm, the front can deepen rapidly into a low pressure area and produce showers and thunderstorms.”

Day to Day
Matt looks ahead and points out young cumulonimbus towers ahead and to the left. “That’s got to be right over Freeport. So where do those play in?”

“Ah, the hot ground produces cumulus clouds. If the air is unstable and moist enough, like it is now, you get showers and thunderstorms. The landmasses are much warmer than the sea, so the towers are almost like landmarks. In VMC you can use them to hop from island to island.”

“Once storms develop, they normally drift with the mean wind flow throughout the depth of the storm. At nighttime, showers and thunderstorms tend to end up over the ocean waters, but sometimes they organize and can persist past dawn. Lightning flash rate is a good indicator of a decaying storm. Once it’s decayed they leave a lot of scattered to broken mid-level debris.”

“Okay, so the showers and cold fronts give us IMC. What about fog?”

“Fog is most likely when the ground is damp from previous showers, skies have cleared, and winds are light. So if you’re planning an overnight flight to an airport that’s had a rainy day, you might have at least some patchy ground fog.”﻿

Putting it together
“So let’s break it down. How does this help us at 15,000 feet?”
I summarize for Matt.

The first thing to remember is that morning is always the best flying weather. Sunlight warming the ground means the weather is going downhill and the ride is smoothest in the morning.

Learn to recognize storms on infrared satellite imagery. Unless you have airborne radar or a ‘spherics detector, you’ll be depending on satellite imagery to monitor the route. These are normally infrared products. Bright signatures indicate cold cloud tops. They’re caused by not only the tops of thunderstorms, but also layers of cirrus clouds. Sometimes it’s hard to tell the difference. Storms look like small blooming shapes with sharp gradients, while cirrus looks more diffuse. Also because this is thermal imagery, shallow rain showers with warm tops, fog, stratus, and stratocumulus layers will all blend in with the ground and be missed.

If you’re flying in the afternoon during the warm season, try to avoid routes that pass over land masses and mountains. The Nueva B503 route, for example, crosses over 100 miles of rugged Cuban terrain. During the rainy season it’s a notorious minefield for strong thunderstorms.

Made It
Fortunately we’ve had an uneventful trip, just two hours in the air and between all the storms. We’re on the ramp at Andros Town, waiting for the inspector. To the south we can see a large cumulonimbus tower blooming, but we’re getting plenty of blue sky. The southeast wind confirms the trade winds are normal, and since we know the mean flow is from east to west, we already know that this storm won’t bother us. And we see nothing is coming this way but blue sky from the east.

We’ll need to continue on to Staniel Cay, about 90 miles on further, where we’ll charter a boat and look at the pigs, a mile away on the next island. Dave suggests, “When we get to Staniel Cay, how ‘bout we get some ham sandwiches? You know, to help the residents by supporting sustainable, locally sourced food. So they can leverage the pigs to build…”

“Okay Dave, you’re voted in as VP of Pig Beach. We’ll drop you off and you can get your operation there going. We’ll videoconference on Wednesday and look at the numbers.”

We all chuckle, looking up just in time to see the uniformed officer climbing out of his golf cart. I guess the humor is infectious since he’s smiling too. This is shaping up to be a great trip.

Tips for Flying the Caribbean
In the Bahamas, VFR flights are not allowed at night, if ceilings are below 1000 feet, if visibility is less than a mile, in clouds, or out of sight of land and water. The requirements are stricter in TMAs: 1500 feet and three to five mile visibility, depending on the airport.

The lack of ATIS and METARs often leaves a lot of questions about the arrival conditions at your destination. This can be a problem when crosswind is a factor and there is no tower or wind sock at the airfield. While descending and in the pattern, use sea waves, trees, and any smoke plumes to estimate the wind.

Be aware of the freezing level—yes, even when flying in the tropics—especially if you like to take your plane up to the realm of the jet routes. In the Caribbean, icing problems can develop as low as 16,000 feet and can be quite severe in large showers and thunderstorms.

For those flying as far as Puerto Rico, one bonus tool in addition to the TAFs is the forecaster’s own thinking process, posted every eight hours, See http://www.nws.noaa.gov and search for “Puerto Rico Discussion.” These discussions are educational and also provide many cues to important weather events taking place in Puerto Rico and neighboring islands. —TV