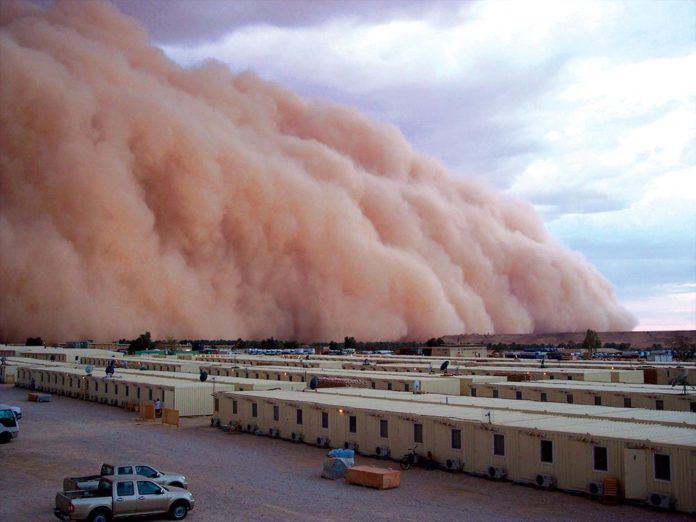 In March, 1933, Malcolm C. Harrison wrote in An Unusual Texas Duststorm, “Pilots were experiencing the same condition over North and Central Texas, all groping about more or less blindly, flying by instruments in a sea of white dust, with the stars dimly shining above and the ground stations reporting visibilities which seemed to belie the conditions aloft. One veteran pilot was plainly baffled by this mysterious element, which he had failed to recognize as dust due to its white color.”

Pilots are occasionally reminded to keep the dirty side down and the blue side up, but in the real world the dirt doesn’t always stay down. Given enough wind and instability, sand, dust and topsoil can quickly fill thousands of cubic miles of atmosphere.

Two things have conspired to bring dust more frequently into the U.S. headlines of aviation and meteorology during recent years. The rise of military aviation in the Middle East has created a greater exposure and awareness, and a long-term drought in agricultural regions of the central United States has led to an increased incidence.

According to the National Drought Mitigation Center, this drought should further expand and deepen as we move into spring 2013. The clear implication here is that duststorm events in the U.S. Great Plains are likely this year.

What’s In It For You
Why should you care about these infrequent events? After all, it is difficult to find any aircraft accident directly attributed to dust, thanks to good airmanship and excellent air traffic control during these events. Instead, the direct problems are usually on roads and freeways, where multi-car pileups frequently occur.

However sand or dust may restrict visibility to instrument conditions, block pitot tubes and static vents, abrade the windshield to the point of making it closely resemble the upper part of your foggles, and sandblast the fuselage. When it infiltrates hot engine parts, the dust forms a glass-like coating with a rough surface that upsets the airflow, reduces performance, and creates an expensive repair problem. This is especially an issue for turbine engines where the solid coating is deposited on the hot compressor blades. This can be a significant issue—at cruise thrust in a typical duststorm, a large turbofan engine will ingest a pound of dust every minute.

A special type of these storms that rightly concerns pilots is the volcanic ash plume. Ash has produced several near-disasters such as the unpowered glide of a British Airways B-747 over Indonesia in 1982.

Volcanic ash is a close relative of meteorological dust. The only real difference, besides being volcanic in origin, is that the particles consist of fine-grain minerals and volcanic glass instead of the relatively coarse clay, sand, and silt in a dust cloud. The edges of volcanic ash are more jagged microscopically and this makes them much more abrasive.

Otherwise, the ash cloud is essentially the same as dust, and due to the smaller size it travels further and takes longer to settle out. Fortunately aviation weather services closely monitor volcanic activity; bulletins of ash cloud trajectories are readily available on sites like aviationweather.gov.

Causes
In meteorological terms, duststorms are fairly straightforward. Loose dust is removed from regions of exposed soil by strong winds. If the particles are fairly large, they are usually made up of sand and the event is called a sandstorm. The event is brief, minutes to hours, and the system rarely travels more than 100 miles. The heaviest sand is concentrated in the lowest hundred feet and rarely tops out more than several thousand feet above the ground.

A duststorm is comprised of smaller particles, such as clay and fine sand from crop fields. The dust may rise tens of thousands of feet and stay aloft from many hours to days. This is because the fine particles have a slower terminal velocity and take a long time to fall to the ground. Vigorously dump out a bag of flour on your kitchen floor and you’ll be enlightened about how long it can take for very fine particles to settle.

The most spectacular and most locally intense duststorms and sandstorms are generated by thunderstorms. A good example of this is the spectacular Phoenix duststorm of July 5, 2011 and many of the duststorms that have been documented in photos from troops in Iraq.

These systems remain fairly close to the thunderstorm itself. Dry surface conditions, loose soil, and very strong outflow winds are important for generating the largest events. As the dust cloud is associated with the downdraft and strong thunderstorm outflow, the dust cloud should be treated as a microburst.

Strong wind shear is likely along the edge of the cloud as well as within it, and visibility within the cloud may approach zero. In the United States, these localized duststorms are most likely to occur during the warm season and primarily in the west.

Large-scale events, such as those in the central United States, are normally caused not by thunderstorms but by large areas of wind and instability. Forecasters look for steep lapse rates—rapid cooling of the atmosphere with height. This favors strong vertical motion and transports the dust several miles up.

On weather charts, the most likely place in the northern hemisphere for a duststorm is in the southwest quadrant of a deep, intensifying low pressure area. The area just behind a dry line or along and ahead of a Pacific cold front usually corresponds to this area. Even if all the patterns match, a duststorm also requires dry, loose topsoil. Areas experiencing desertification are especially prone to duststorm and sandstorm activity. On the other hand, if the area has seen plenty of rain, nothing will be flying into the atmosphere except perhaps a few balloons from the local car dealership.

This type of synoptically-driven duststorm is not directly associated with shear or microbursts and the risks are not particularly significant. However the pilot will need to be prepared to fly IFR and risk the inevitable wear and tear on the aircraft. The strong winds also mean there will be mechanical turbulence. Unlike a thunderstorm-driven duststorm, the sand may extend through many thousands of feet and form into stratus-like layers in the middle or upper troposphere.

Protecting Yourself
Duststorm conditions can develop rapidly with little advance notice, since modeling of soil conditions is not yet very sophisticated. The first line of defense for pilots is awareness. Ask yourself if the route of flight is over dry terrain with little ground cover. Are there drought conditions? Might intense weather systems or thunderstorms affect the area? If the answers are “yes” or if conditions might deteriorate later, this is the best time to study the map to determine which alternate route is more likely to yield better conditions. Weather briefings and data from Internet sources will help monitor the weather risk before engine startup.

Once under way, continue to monitor weather data. Observe the weather as you proceed along your route, and match that to the details from your pre-departure weather briefing. If you are heading into an area behind a weather system in Kansas and it starts looking dark and hazy, you’ll know you may be entering a duststorm. If the duststorm is thunderstorm-driven, it can be avoided by climbing to a higher altitude or avoiding the parent cell. If it is synoptically-driven, changing flight level or changing to an alternate route will offer some improvement.

Congratulations to your situational awareness and careful planning if you do manage to avoid the duststorm. But if you are behind the curve or flying out late in the day, a duststorm event can still affect you. Airlines will often divert or cancel large blocks of flights during duststorm events. The effects ripple through the ATC system in minutes, affecting traffic flow management and terminal operations throughout the region.

Be aware of the weather patterns during the transition seasons when tying down in a new airport. Are you flying to Amarillo or Phoenix in May? Do you have covers for your intakes and vents? If your plane is outside, dust can accumulate in openings, vents, and intakes. And if the doors and windows are not properly closed and sealed, the dust can enter the cockpit too, giving the pilot a real taste of the Southwest.