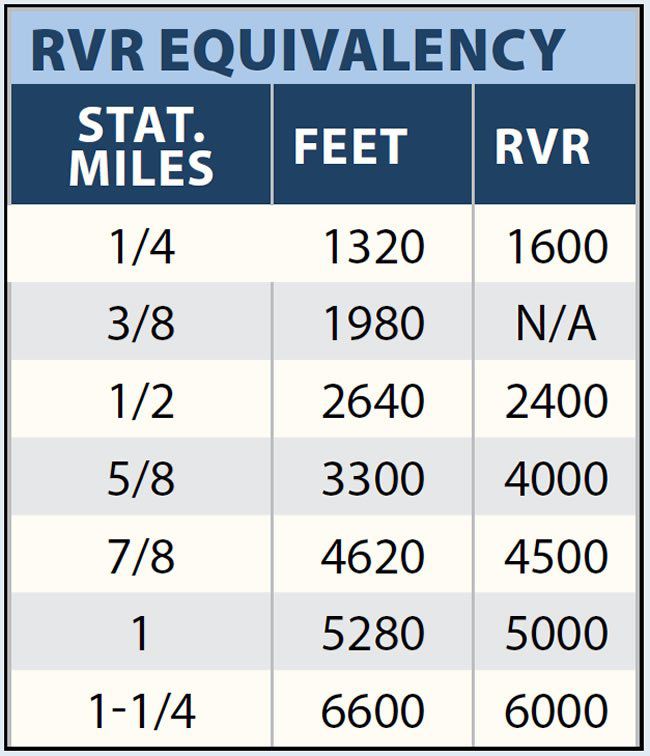 RVR is not Visibility

The FAA helps us confuse runway visual range (RVR) with flight visibility, but they’re different concepts. RVR is an instrumentally-derived value at a runway. Flight visibility is a pilot-observed distance in flight. Regulation 91.175 is clear—flight visibility is required to descend below DA/MDA. Yet, approach charts confusingly equate the two by providing both RVR and visibility values.

A 2010 FAA legal interpretation provides some guidance. The interpretation quotes an earlier (1980) NTSB order stating, “Controlling visibility is not ground visibility, as reflected by RVR values, but rather flight visibility, as measured from the cockpit of the aircraft.” The now defunct Air Transportation Operators Inspector’s Handbook provided a clearer description. RVR is not:

– a measure of meteorological visibility.

– a measure of surface visibility or tower visibility

– a measure of seeing conditions on taxiways, ramps or aprons

– measured or reported by a human observer (in the U.S.)

Even if RVR and flight visibility aren’t the same, someone needs to teach the FAA math.

Approach plates commonly equate 2400 RVR with one-half mile. One-half mile is actually a little over 2600 feet. The FAA even provides a mathematically challenged table in the AIM to convert RVR to miles. So, to land do we need, 2600 feet or 2400 feet of visibility?

The FAA doesn’t say (Does is really matter? We know what we’re going to tell an inspector.), but a little perspective will provide some insight. Prior to RVR, visibility readings could be taken from locations far from the runway. Visibility at the reporting point could be much different from that at the runway. RVR technology allows visibility to be measured at specific points on a runway.

Flight visibility and RVR aren’t the same. Just recognizing the disparity indicates a level of understanding probably shared by only a few. —JM