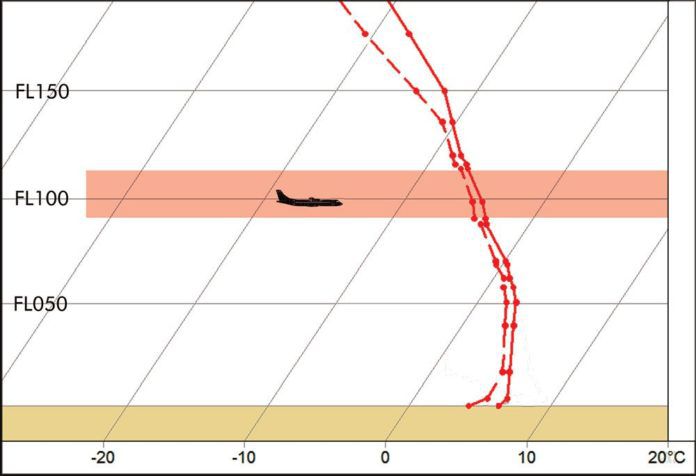 Icing is one of the most feared hazards of flight. In the extreme, the aircraft becomes enshrouded in a thick, solid mass that reduces lift and thrust as the twin effects of drag and gravity overcome our ability to maintain controlled flight. Not only is the shape of our airfoils changed, but ice accumulation dramatically increases drag, clogs pitot tubes, jams control surfaces, blocks undercarriage doors, obstructs engine intakes, and the final insult, covers the windshield. We may not even be aware of how extensive the ice is until a high angle of attack or unusual power settings are required. At this point premature and significant aging may instantly occur within the cockpit.

Causes and Mechanics
The causes of icing might seem contradictory. We were taught that zero degrees Celsius separates the liquid and solid phases of water, across which melting and freezing occur.

But, meteorologists and seasoned pilots are quickly schooled in water’s more unusual behaviors. Liquid droplets do indeed exist in temperatures as cold as -40 degrees Celsius. This is because the production of solid water forms of ice crystals and graupel requires a nucleus, which is usually provided by microscopic dust particles or a collision with a droplet or snowflake that is already frozen. If this occurs, water turns to ice or water vapor grows directly into ice crystals (sublimation). The icing hazard is greatly reduced once the particle is solidly frozen.

However, nuclei are often unavailable, not enough collisions occur, and the cloud is too warm for abundant ice crystal growth, so parts of the cloud might consist mostly of supercooled water. An airplane showing up in the cloud becomes the unlucky catalyst. The supercooled water freezes on impact or runs some distance along the surface before freezing. If it’s your lucky day, the freezing water is swept away before it adheres to the surface. Ultimately, though, ice accumulation is self-feeding—more collisions cause this coating of ice to grow, which causes more collisions, and so on.

We need a quick review of condensation, the conversion of gaseous water to liquid, before we explore these supercooled droplets. Condensation, which is responsible for most cloud formation, occurs when moist, saturated air is lifted. This lift might be caused by instability, as in thunderstorms, or by large-scale lift, as in frontal systems. The first particles to develop are only about 10 microns (one hundredth of a millimeter) and are called cloud droplets. Even in temperatures well below freezing, condensation often results in supercooled liquid droplets instead of ice crystals.

Dry snow, ice pellets, crystals, and even small liquid supercooled cloud droplets will only produce trace icing on dry surfaces. The danger of icing comes when supercooled droplets grow to exceed 50 microns. With their larger size, the accumulation on the aircraft grows at alarming rates. These droplets are called supercooled large droplets (SLDs).

Types
The type of icing is dictated mostly by how quickly the SLDs freeze. If the process is slow, clear ice will form since air trapped in the water can escape. Clear ice is very dense, adheres tenaciously to surfaces, and has a tendency to flow over all exposed parts of the aircraft. Clear ice is favored in the warmer subfreezing temperatures, zero to -10 degrees C. Since it forms a liquid coating on the aircraft surface, solid precipitation like snow may partially melt on impact, compounding the problem.

Rime ice is the most common type. It has a milky, opaque appearance caused by “flash-frozen” air trapped in the water. Forming almost instantly on impact, it builds on the leading edges of…everything: wings, antennae, lights, hinges, etc. It is most likely to occur between about -15 to -40 degrees C.

A special type of icing can develop if the airplane is cold-soaked from frigid temperatures on the ground or in flight. Regardless of the outside temperature, ice may quickly develop on a cold airframe when flying through a cloud with a high liquid water content. Even raindrops with temperatures slightly above freezing may impact the plane and produce a coating of clear ice, which can quickly get dangerous if you’re climbing into even colder regimes.

Even unprotected aircraft can survive somewhat prolonged light icing encounters. Moderate icing levels should have the pilot considering a way out, while severe icing requires immediate and decisive action, even in protected aircraft.

Icing type and location are predicted by temperature profiles from soundings (SKEW-Ts) to see if there is a “warm layer” aloft. The icing forecast is greatly simplified if the temperature continuously falls with height, which is common in tropical air masses, well behind most cold fronts in cold advection regimes, and in summertime events. Icing here is normally confined to -5 to -10 degrees C, where it can be easy for the pilot to avoid high liquid water content clouds.

A warm layer, often from cold-season warm fronts, is more complicated. Subfreezing temperatures exist at all levels except for a shallow warm layer near or above the upper-level warm front. The lower cold layer is highly vulnerable to severe icing from freezing rain, while the upper cold layer may contain an assortment of icing types. Depending on the droplet sizes and processes within the cloud, layers may be biased toward supercooled water and SLDs, may tend toward mixed forms like wet snow and graupel or may favor solid forms entirely like dry snow.

As a general rule, it is often best to climb out of ice to temperatures colder than -20 degrees C. This escapes most of the supercooled water. Alternatively, fly towards the lowest levels of precipitation and radar reflectivity. An understanding of soundings and temperature distribution during preflight planning will help provide context for any icing advisories.

Planning Ahead
Numerical models are available today that provide icing information orders of magnitude better than anything available 20 years ago. Though numerical models offer great precision, their ability to adequately describe the microphysics within the cloud remains marginal. The real liquid water content may differ significantly from the models. So, icing algorithms must be used carefully and in conjunction with official forecasts that add human forecast expertise. The Aviation Weather Center website has a great assortment of both numerical and human-augmented products to help plan a safe flight. See aviationweather.gov.

By now, most of the WSR-88D weather radars in the United States have been upgraded with polarimetric capabilities, in which the electro-magnetic field of the backscattered radar signal is analyzed in both the horizontal and vertical planes. This provides an amazing amount of detail about particle type and distribution that promises to significantly improve information about ice and water composition of clouds. Polarimetric data is available to the general public, though it is so new that only the best radar websites and applications provide it.

Within this data there is a derived product called “hydrometeor classification algorithm” (HCA). This shows the most likely particle type within a cloud at each radar elevation. This may be valuable before the checklists are brought out to help get an idea of what is in the cloud and along the first segments of the route. The presence of liquid precipitation types in a subfreezing layer indicates an icing hazard. Remember that this is only a depiction of precipitation type where the radar beam at that particular tilt intersects the cloud, and it will be necessary to use some sort of cursor readout or a range-height nomogram to get an accurate conversion of this information to a specific height. This technology is still in an early stage of development and it may take several years before it becomes a mainstream part of flight planning.

Though most discussions of icing cover in-flight problems, NTSB accident reports show that a large number of accidents are caused before takeoff. Insufficient de-icing, failure to check the wings and control surfaces, failure to activate engine anti-icing, get-there-itis, and lack of awareness of weather conditions can all overwhelm pilots and lead to a cascade of problems during the critical seconds that the aircraft is becoming airborne. This is where problems are most preventable, so adhering carefully to checklists and triple-checking icing issues before making that call for your departure clearance will put you well ahead of the curve.